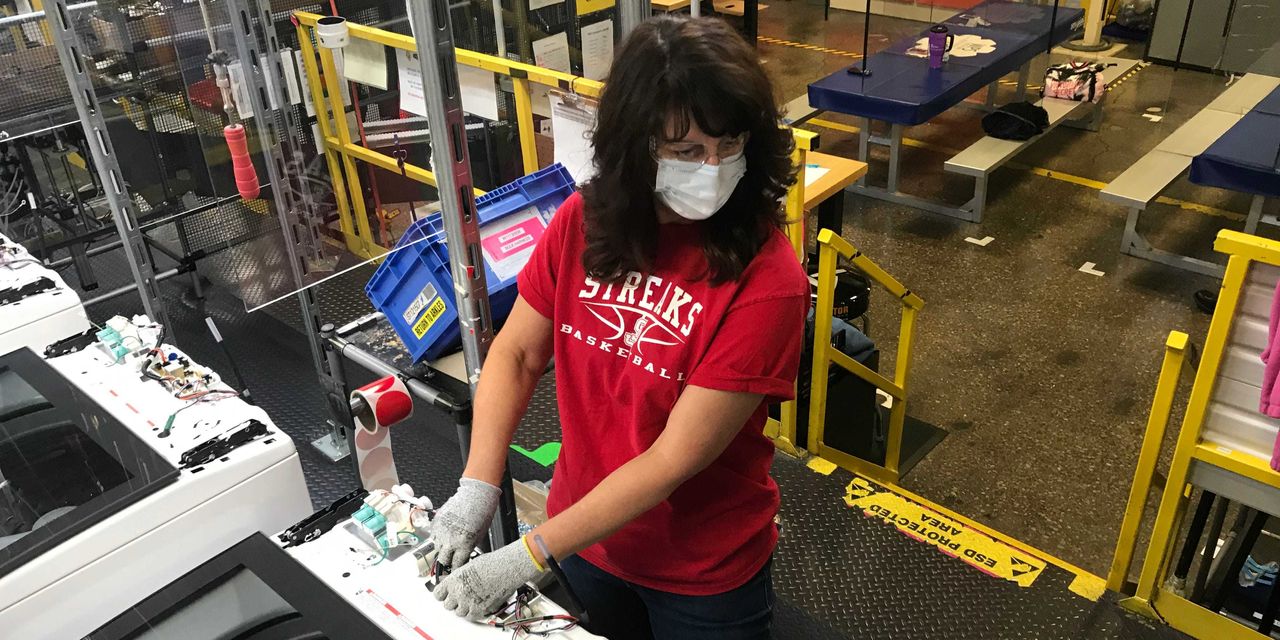 The Benton Harbor, Mich.-based company has ramped up appliance production, but delays have grown as waits for components and other snags lead to back-orders of around six weeks for the average appliance, said Whirlpool CEO Marc Bitzer.

“We are producing more, but the demand is so strong that we just can’t keep up,” he said.

Demand for Whirlpool’s refrigerators, ovens and other appliances lifted the company’s net income 20% higher to $471 million, the company said Thursday, as revenue increased 3.7% to $5.49 billion for the quarter that ended Sept. 30.

At the same time, Whirlpool is paying more for raw materials, labor and transportation. The company said it expects raw material inflation to be about $1 billion this year, and cut its projected revenue growth for the year to 13%, down from 16% forecast in July. Whirlpool said an adjusted profit measure fell in its latest quarter as higher costs offset increased prices for its products.

Shares were trading down about 4% in after-hours trading.

Manufacturers attribute the shortages to strong consumer demand, while a dearth of labor in shipping channels has slowed the movement of goods and finished products. Consumers are buying about $2 trillion worth of cars, appliances and other long-lasting purchases a month, compared with around $1.5 trillion a month for much of 2019, according to government data. That extra demand is putting pressure on the entire system, leading to delays at suppliers, ports and rail yards, according to manufacturers.

Some consumers renovating their kitchens have had to wash dishes in bathtubs and cook dinner in their bedrooms as appliance delays persist. Some appliance sellers also said the situation isn’t likely to improve soon.

“It’s not going to get better, probably not for another year,” said Mike Abt, co-president of Chicago appliance seller Abt Electronics.

All the new orders need to be filled, which has become harder due to labor, component and transportation shortages, said Mr. Bitzer. Whirlpool is also finding it hard to get computer chips. “The shortage environment is around us,” he said.

The company said it is offsetting increased costs by raising prices and making more expensive appliances. Prices for major appliances made in the U.S. were up 10% in September compared with a year ago, according to the Bureau of Labor Statistics.

Whirlpool said revenue in North America, which represents roughly 57% of total sales, rose 5.1% in the third quarter to $3.11 billion, buoyed by homebound consumers who continued to make home upgrades and buy more appliances. Consumers are also using their ovens at double the rate before the pandemic, which might require them to be replaced more often, Whirlpool said.

The appliance maker expects demand to stay strong as higher usage, increased home building and a strong economy lead to more appliance purchases. The company told investors it is planning for revenue growth of up to 6% a year in the long run, excluding acquisitions and currency fluctuations, about double its previous estimate.

Write to Austen Hufford at austen.hufford@wsj.com and Kimberly Chin at kimberly.chin@wsj.com

Reddit Inc.’s role in the recent stock-trading frenzy has brought millions of new users to the social-media platform, its chief…

Jim Cramer says ViacomCBS is a buy, sees more room for the dividend-paying stock to run