While the Omicron variant softened first-quarter business, management said the problem had begun to wane in early February. The variant “began to impact our business in late December,” CEO Dara Khosrowshahi told analysts. Still, Mobility bookings are regaining strength: gross bookings are up 25% on a month-over-month basis in the most recent week.

“That minor letdown evidently didn’t dampen investors’ excitement about Uber’s progress at the end of last year,” reported the New York Post. “Its shares rose by about 6% in extended trading after the news came out. Even so, Uber’s stock price still remains more than 30% below its peak of roughly $64 reached about a year ago.” The latest numbers “highlight how far Uber has come since the declaration of a worldwide pandemic in March 2020 triggered government lockdowns that kept most people at home, limiting the need for anyone to summon a ride on Uber.” 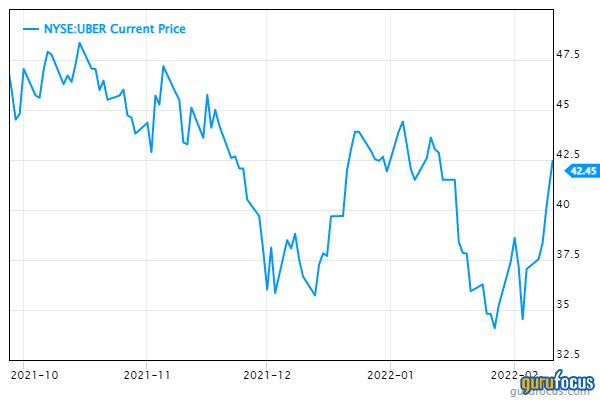 For the quarter, the company notched revenue of $5.8 billion, an increase of 82% from a year ago and above the consensus estimate of $5.3 billion. Gross bookings totaled $25.9 billion, a 51% increase. The company had estimated bookings would be between $25 billion and $26 billion.

Net income in the year’s final quarter was $892 million, or $0.44 per share, the company said. That included a $1.4 billion pretax gain on the company’s equity investments in the Singapore-based ride sharing company Grab (GRAB) and the self-driving technology company Aurora Innovation (AUR), offset by a loss on its stake in China-based ride-sharing giant DiDi Global (DIDI). Net income also includes a negative impact of $334 million in stock-based compensation expense for executives.

Khosrowshahi said in a statement that the fourth-quarter results “demonstrate just how far we’ve come since the beginning of the pandemic.” He added that during the quarter, more consumers were “active on the platform” than ever before. Khosrowshahi also noted that the Delivery business reached profitability on an adjusted Ebitda basis for the first time, and that mobility gross bookings “approached” pre-pandemic levels.

“We outperformed our quarterly guidance and delivered $540 million of Adjusted Ebitda improvement compared to Q4 of last year,” said Nelson Chai, the company’s chief financial officer. “Moving forward, we are poised to continue to grow at scale while expanding profitability.”

Khosrowshahi also told analysts he felt Uber’s delivery service needed to be better – specifically, by improving its restaurant base in the suburbs – to stay competitive with DoorDash (

The company significantly increased its marketing spend in the fourth quarter, upping sales and marketing expenses by 36% on a quarterly basis, reported Yahoo. “Uber launched several large Uber Eats advertising campaigns in the U.S. market at the end of last year.”

For the first quarter of 2022, management anticipates gross bookings of $25 billion to $26 billion and adjusted Ebitda of $100 million to $130 million.

A Mixed to Positive Outlook for Ross Stores

When Ross Stores Inc. ( ROST, Financial) reported its fourth-quarter and fiscal 2021 results on March 1, it had good…