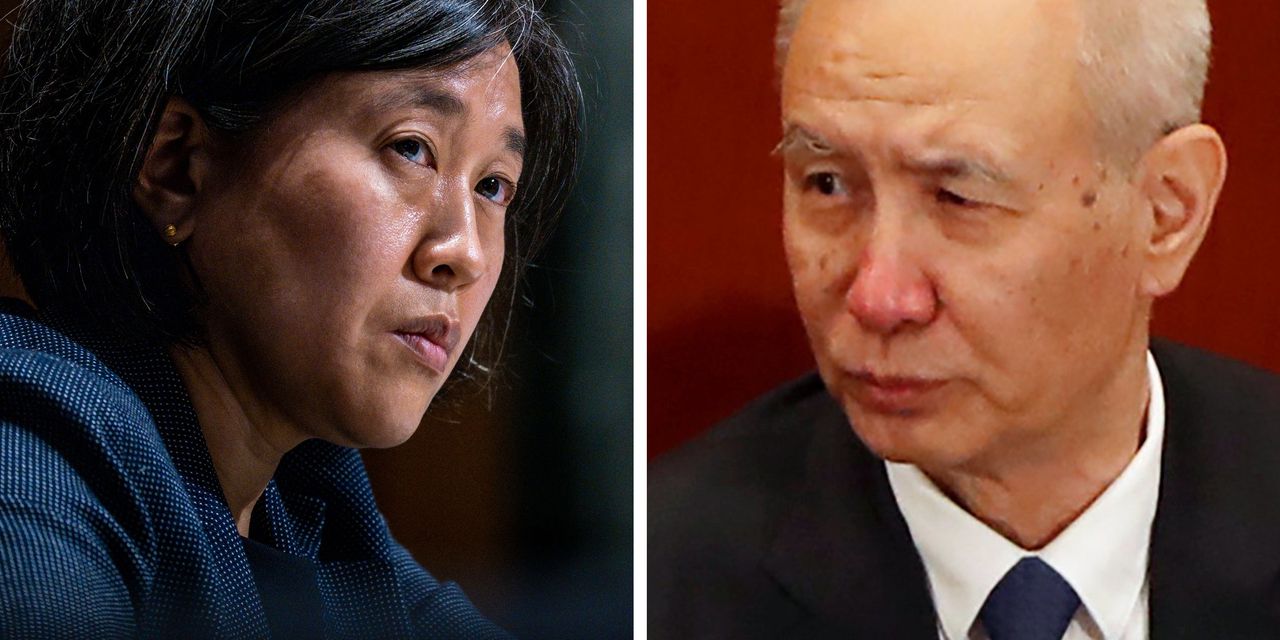 Ms. Tai discussed the administration’s guiding principles on trade policy and her continuing review of the U.S.-China trade relationship in a virtual meeting, the U.S. Trade Representative’s office said. Ms. Tai raised concerns, her office said, though it didn’t go into any detail.

A statement from China’s Commerce Ministry described the call Wednesday as “candid, pragmatic and constructive.” It also said both sides had agreed to keep communicating.

In advance of Wednesday’s virtual meeting, officials with the U.S. Trade Representative’s office held a call with their Chinese counterparts Tuesday night, according to people with knowledge of the situation.

During that conversation, the Chinese officials called on the U.S. to roll back remaining tariffs on Chinese products, the people said. The tariffs have led to a decline in Chinese imports to the U.S.

U.S. importers, which must pay the levies on imported Chinese goods, have also pressed the administration to lift the tariffs imposed by former President Donald Trump.

Wednesday’s call marked the first time both sides had engaged in high-level talks since senior U.S. and Chinese officials met in Alaska in March. Since then, the bilateral relationship has continued to strain as the two countries lock horns over issues ranging from geopolitics and human rights to investigations into the origins of Covid-19.

By letting Mr. Liu, President Xi Jinping’s right hand on the economy, speak with Ms. Tai, the Chinese leadership is signaling the continued importance of the economic relationship to Beijing.

Beijing recently has considered whether to replace Mr. Liu as its top economic envoy with Washington, The Wall Street Journal reported earlier this month. The deliberation was part of a wider personnel shuffle as China recalibrates its approach to the new U.S. administration.

For now, the leadership has decided to keep Mr. Liu in his role. But Chinese officials familiar with the deliberations say China’s Commerce Ministry, which reports to Vice Premier Hu Chunhua, likely will play a bigger role in dealing with the U.S. on trade matters going forward.

Ms. Tai has held a series of talks with trade ministers from around the globe, but hadn’t spoken to her Chinese counterpart until Wednesday night. The Biden administration has been trying to sort out its trade policy and rebuild what it considered shattered relationships with allies during the Trump administration before reaching out to the Chinese, U.S. officials have said.

Under the Phase One trade accord hammered out under the Trump administration, the two sides are required to have a formal review, which is already behind schedule. The U.S. didn’t go into detail on when such a review is expected.

Under the accord, Beijing pledged to sharply increase purchases of U.S. goods and is well behind schedule, according to statistics kept by Chad Bown, an economist at the Peterson Institute for International Economics.

From the Chinese side, there has also been some reluctance to schedule a meeting before the U.S. agreed to start rolling back tariffs on hundreds of billions of dollars of Chinese goods shipped to the U.S.

Write to Bob Davis at bob.davis@wsj.com and Lingling Wei at lingling.wei@wsj.com

U.S. President Donald Trump could restart rallies in the next two weeks as his campaign gears up for the November…

Employees at the U.S. division of JBS SA, JBSAY -0.68% the world’s largest meat company, noticed something wrong in their…