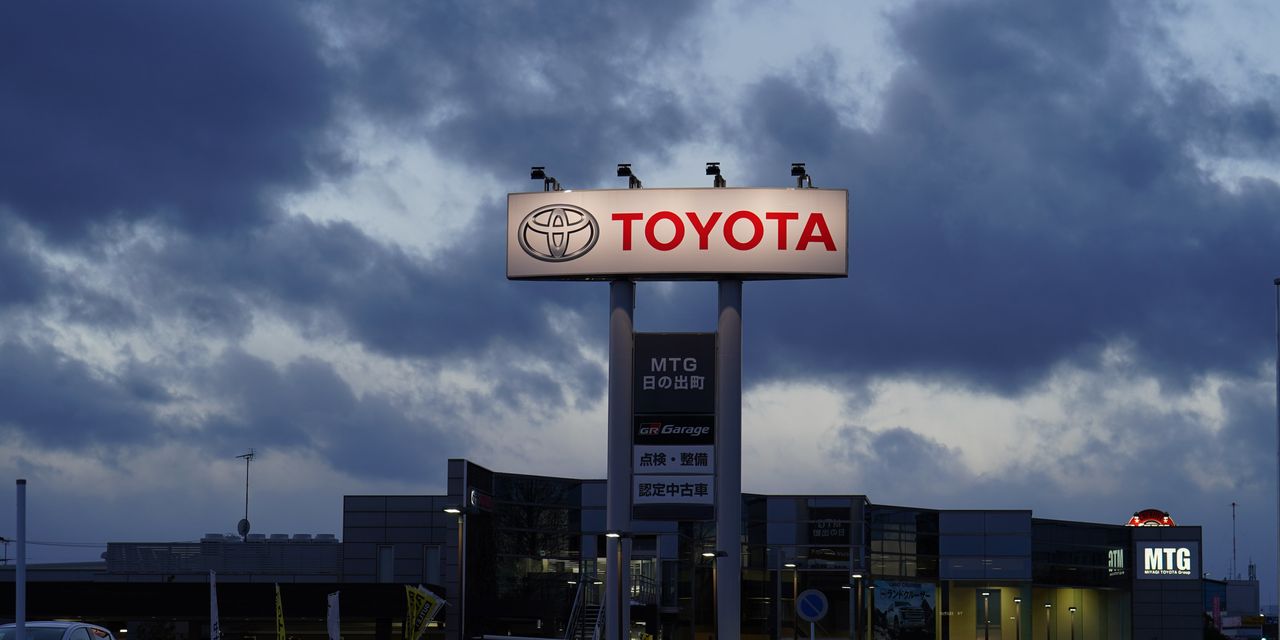 The world’s largest car maker is finally hitting the chip-shortage speed bump which curbed growth across the industry last year. Given Toyota’s TM 1.56% deft driving so far and a probable partial improvement in supply-chain snarls this year, that problem likely won’t last.

Toyota’s real challenge is how to negotiate the shifting landscape of the auto industry itself: especially consumers’ and governments’ interest in an electrified future.

The Japanese car maker has ridden out the pandemic and the resulting supply-chain chaos better than most peers. But as the component shortage has persisted, it has caught up with Toyota too: The company’s revenue last quarter fell 4.5% from a year earlier.

Toyota lowered its sales forecast Wednesday by 3.5% for the fiscal year ending in March as semiconductor shortages dampened production. It now expects to produce 8.5 million cars, including its luxury Lexus brand, this fiscal year, down from the 9 million forecast in November. That would still be about 8% higher than sales in the previous fiscal year. Toyota also adjusted down its revenue forecast, but has kept profit guidance unchanged. That partly reflects a cheaper yen, but also pricing power: Cuts to incentives and discounts are likely in a market where supply remains so tight.

With the pandemic probably finally ebbing in 2022, Toyota might successfully put this problem in the rear view mirror too. The bigger question for investors is what direction the company is really headed. Toyota has been slow to push into battery-powered electric vehicles and instead has relied on traditional hybrids like the Prius for its electric strategy.

But how to deal with the EV transition has become an unavoidable question for every auto maker, especially after the explosive growth of last year. EV sales doubled in 2021, driven by strong growth in China and Europe. EVs, including plug-in hybrids, accounted for 17% of car sales in Europe and 13% in China for the whole 2021, according to industry data tracker. EV-volumes. Penetration rates were even higher in the latter half of the year.

Toyota’s two biggest markets—Japan and the U.S.—are laggards in the adoption of EVs. EV market share is around 4.4% in North America, according to EV-volumes, and even lower in Japan. So understandably, battery EVs and plug-in hybrids accounted for around 1% of Toyota’s car sales globally. But increasingly, government policies and shifts in the market might force the company to move faster.

Indeed, Toyota revealed its most ambitious EV plan so far in December. The company said it aims to increase battery-powered EV sales to 3.5 million by 2030 and pledged to invest $70 billion in electrification—with half of that going into such EVs. It will roll out 30 new EV models together with Lexus.

Looking forward, Toyota’s shareholders will be watching closely to see how, and whether, the company can keep raking in sales and profits based on its mastery of existing platforms—while also making bolder, bigger investments into future technologies.

A group of U.S. federal agencies on Tuesday said they plan next year to begin delineating how banks can legally…