The fund, which is part of

Sticking to these criteria, the fund established three new positions during the three months ended June 30, sold out of three companies and added to or trimmed a number of other existing holdings. Notable trades included new stakes in Alstom SA (

XPAR:ALO, Financial), allocating 1.09% of the equity portfolio to the stake. The stock traded for an average price of 44.84 euros ($53.13) per share during the quarter.

The French company, which provides systems, equipment and services for the railway transport sector, has a market cap of 13.54 billion euros; its shares closed at 36.40 euros on Tuesday with a price-earnings ratio of 41.51, a price-book ratio of 1.5 and a price-sales ratio of 1.16.

The GF Value Line suggests the stock is modestly undervalued currently based on its historical ratios, past performance and future earnings projections. 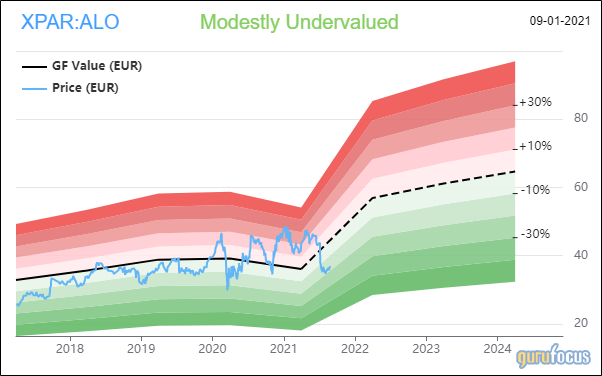 GuruFocus rated Alstom’s financial strength 4 out of 10. Despite having adequate interest coverage, the low Altman Z-Score of 0.61 warns the company could be at risk of bankruptcy since assets are building up at a faster rate than revenue is growing. The return on invested capital is also being overshadowed by the weighted average cost of capital, suggesting it is struggling to create value while growing.

The company’s profitability fared better, scoring a 6 out of 10 rating on the back of an expanding operating margin. Returns on equity, assets and capital, however, are underperforming compared to over half its competitors. Alstom also has a low Piotroski F-Score of 2 out of 9, indicating business conditions are in poor shape. As a result of revenue per share declining over the past 12 months, the predictability rank of one out of five stars is on watch. According to GuruFocus, companies with this rank return an average of 1.1% annually over a 10-year period.

Causeway holds 0.33% of the company’s outstanding shares. The iShares MSCI ACW ex. U.S. ETF also has a position in the stock.

Having previously exited a position in AstraZeneca (

LSE:AZN, Financial) in the third quarter of 2020, the International Value Fund entered a new 391,612-share holding, dedicating 0.83% of the equity portfolio to it. Shares traded for an average price of 78.44 British pounds ($108.16) each during the quarter.

The pharmaceutical and biotech company, which is headquartered in the U.K., has a market cap of 131.89 billion pounds; its shares closed at 85.14 pounds on Tuesday with a price-earnings ratio of 40.39, a price-book ratio of 10 and a price-sales ratio of 5.16.

According to the GF Value Line, the stock is fairly valued currently. 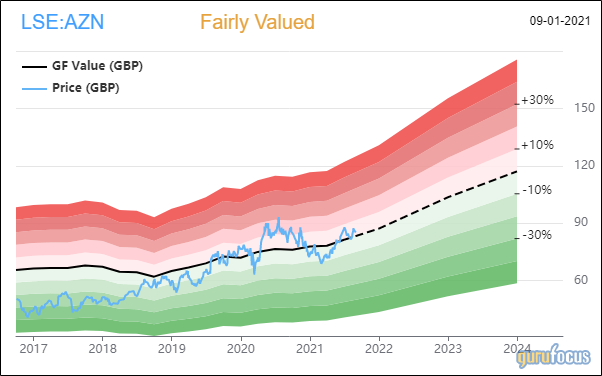 AstraZeneca’s financial strength was rated 4 out of 10 by GuruFocus. As a result of the company issuing approximately $4.8 billion in new long-term debt over the past three years, it has weak interest coverage. The Altman Z-Score of 2.77 also indicates it is under some financial pressure since it has recorded losses in operating income over the past several years. The ROIC eclipses the WACC, suggesting value is being created.

The company’s profitability fared better with a 6 out of 10 rating. Despite having a declining operating margin, returns outperform over half of industry peers. AstraZeneca also has a moderate Piotroski F-Score of 6, indicating conditions are typical for a stable company, as well as a one-star predictability rank.

Of the gurus invested in AstraZeneca, the

In its largest trade of the quarter, the fund exited its stake in International Consolidated Airlines Group (

LSE:IAG, Financial), selling 25.8 million shares. The trade had an impact of -1.28% on the equity portfolio. The stock traded for an average per-share price of 2 pounds during the quarter.

GuruFocus estimates the fund gained 26.43% on the investment, which was established in the first quarter of 2020.

The London-based airline holding company more commonly known as IAG, which owns the British Airways and Iberia brands, among several others, has a market cap of 7.91 billion pounds; its shares closed at 1.59 pounds on Tuesday with a price-book ratio of 10.15 and a price-sales ratio of 1.35.

Based on the GF Value Line, the stock appears to be significantly overvalued currently. 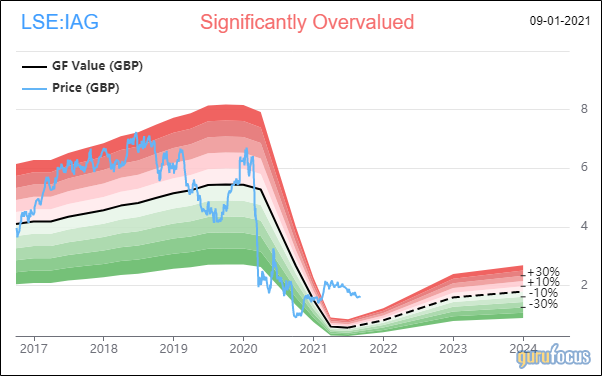 GuruFocus rated IAG’s financial strength 2 out of 10. While the cash-to-debt is outperforming versus over half of the other players in its industry, the low Altman Z-Score of -0.28 warns the company could be in danger of going bankrupt if it does not improve its liquidity.

The company’s profitability scored a 5 out of 10 rating even though its margins and returns are negative and underperform a majority of competitors. IAG also has a weak Piotroski F-Score of 1 and revenue per share has been declining for the past five years.

No gurus currently hold the stock.

With an impact of -1.23% on the equity portfolio, the International Value Fund trimmed its ING Groep (

XAMS:INGA, Financial) stake by 53.45%, selling 5.56 million shares. During the quarter, the stock traded for an average price of 10.86 euros per share.

It now holds 4.8 million shares total, representing 1.13% of the equity portfolio. According to GuruFocus, the fund gained an estimated 17.04% on the investment so far.

The Dutch bank and financial services company, which is headquartered in Amsterdam, has a market cap of 45.67 billion euros; its shares closed at 11.70 euros on Tuesday with a price-earnings ratio of 22.54, a price-book ratio of 0.85 and a price-sales ratio of 2.65. 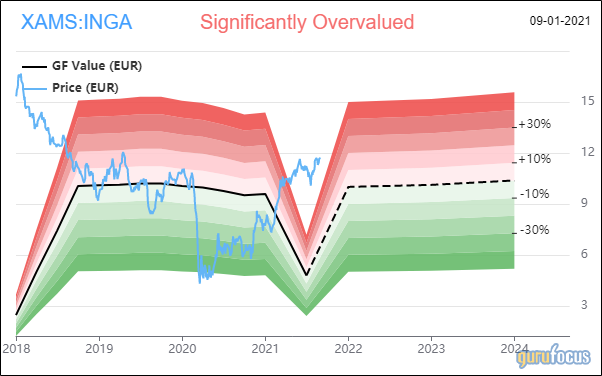 ING’s financial strength was rated 3 out of 10 by GuruFocus on the back of debt-related ratios that underperform over half of other companies in its industry.

The company’s profitability scored a 4 out of 10 rating as its margins and returns underperform a majority of industry peers. ING also has a low Piotroski F-Score of 3. Despite recording a slowdown in revenue per share growth over the past year, it still has a one-star predictability rank.

With 0.12% of outstanding shares, Causeway is the company’s largest guru shareholder.

The fund curbed its holding in Volkswagen (

The International Value Fund now holds 54,370 shares total, making up 0.24% of the equity portfolio. GuruFocus estimates the investment generated a gain of 0.71% for Causeway since it was established in the first quarter of 2015.

The German automaker, which is known for its namesake line of cars as well as the Audi, Bugatti, Bentley, Lamborghini and Ducati brands, among others, has a market cap of 125.26 billion euros; its shares closed at 201 euros on Tuesday with a price-earnings ratio of 5.68, a price-book ratio of 0.73 and a price-sales ratio of 0.33.

According to the GF Value Line, the stock appears to be fairly valued currently. 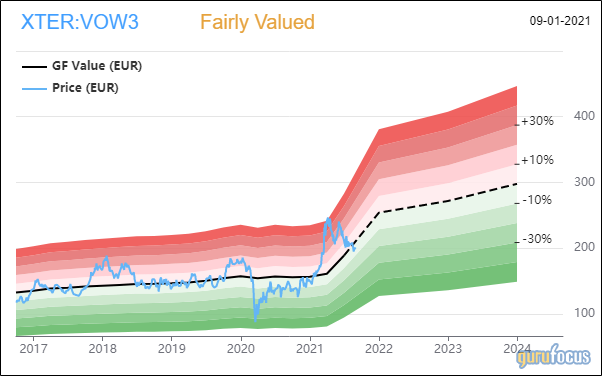 GuruFocus rated Volkswagen’s financial strength 4 out of 10. Despite having adequate interest coverage, the Altman Z-Score of 1.25 warns of potential bankruptcy risk.

The company’s profitability fared better with a 6 out of 10 rating, driven by strong margins and returns that outperform over half of its competitors. Volkswagen also has a high Piotroski F-Score of 8, meaning operations are healthy, and a one-star predictability rank.

During the quarter, the International Value Fund also entered a position in Credicorp Ltd. (

Around 40% of Causeway’s $5.66 billion equity portfolio, which is composed of 59 stocks, is invested in the financial services and industrials sectors, followed by smaller holdings in the technology and health care spaces. 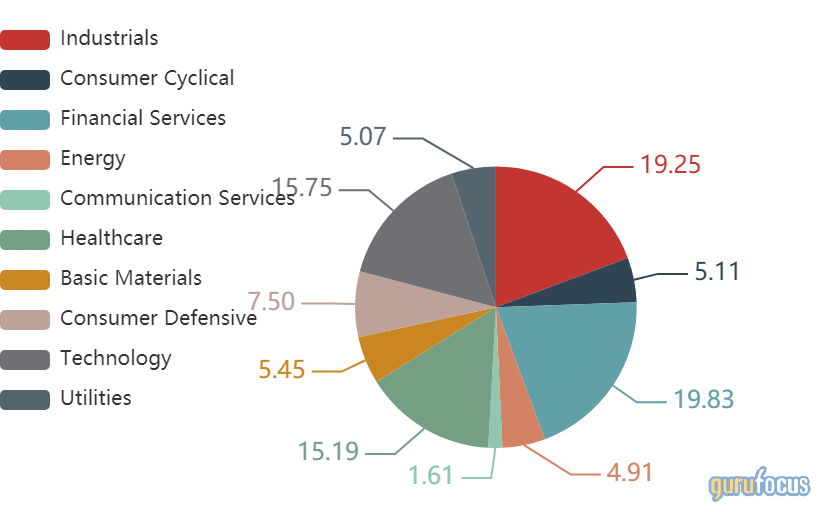 According to GuruFocus, the fund returned 5.15% in 2020, underperforming the MSCI EAFE Index’s 7.82% return by a slim margin.

Agilent Technologies Stock Shows Every Sign Of Being Significantly Overvalued

The stock of Agilent Technologies (NYSE:A, 30-year Financials) is believed to be significantly overvalued, according to GuruFocus Value calculation. GuruFocus…

A Look at R&D Spending in Pharma

In GAAP accounting, fixed assets are usually capitalized on a company’s balance sheet and subsequently amortized over their expected useful…