Tweedy Browne (Trades, Portfolio) Global Value Fund recently disclosed its portfolio update via form NPORT-P to the Securities and Exchanges Commission for the first quarter of 2022, which ended on March 31.

The fund operates as part of New York-based value investing firm Tweedy, Browne Co. LLC. The portfolio managers aim to invest in a diverse range of companies in developing countries, with an emphasis on undervalued securities, in order to achieve long-term capital growth. Though it invests primarily in non-U.S. marketable equity securities, the fund does own shares of some U.S.-listed securities if the portfolio managers perceive an attractive enough growth opportunity.

Based on the latest NPORT-P filing, the fund’s top new buys for the quarter were Ionis Pharmaceuticals Inc. (

Investors should be aware that, just like 13F reports, NPORT-P reports do not provide a complete picture of a guru’s holdings to the public. Filed by certain mutual funds after each quarter’s end, they collect a wide variety of information on the fund for the SEC’s reference, but in general, most of the information made public is in regard to long equity positions. Unlike 13Fs, they do require some disclosure for long equity positions in foreign stocks. Despite their limitations, these filings can still provide valuable information. You can read more about form NPORT-P at the SEC website here.

The fund established a 1,819,506-share stake in Ionis Pharmaceuticals (

IONS, Financial), giving the stock a weight of 1.13% in the equity portfolio. During the quarter, shares traded for an average price of $32.73 apiece.

Ionis is a California-based biotech company that researches and develops RNA-targeted therapeutics. Its antisense therapies are designed to interact directly with RNA to disrupt disease processes.

On April 19, shares of Ionis traded around $41.25 for a market cap of $5.83 billion. According to the GF Value chart, the stock is modestly undervalued. 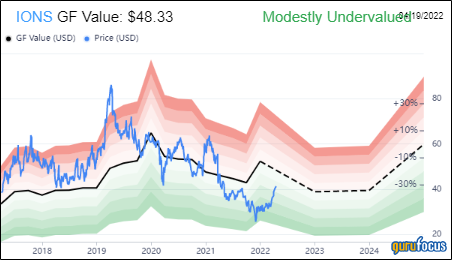 The company has a GuruFocus financial strength rating of 5 out of 10 and a profitability rating of 4 out of 10. Warning signs include assets growing faster than revenue and weighted average cost of capital exceeding return on invested capital, while positive signs include a three-year revenue per share growth rate of 8.7% and a three-year Ebitda per share growth rate of 36%. 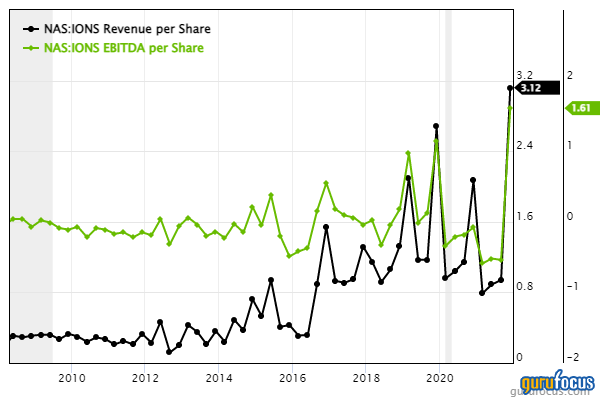 The fund also picked up 1,284,760 shares of Sumitomo Heavy Industries (

On April 19, shares of Sumitomo traded around 2,645 yen for a market cap of 324.03 billion yen. According to the GF Value chart, the stock is modestly undervalued. 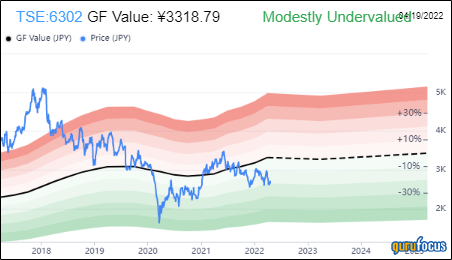 The company has a GuruFocus financial strength rating of 6 out of 10 and a profitability rating of 8 out of 10. Warning signs include declining operating and gross margins, while positive signs include price-earnings, price-book and price-sales ratios close to 52-week lows. 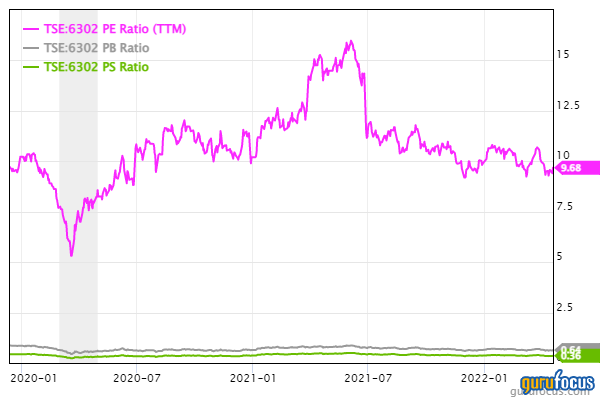 OSTO:SKF A, Financial), giving the stock a weight of 0.47% in the equity portfolio. During the quarter, shares changed hands for an average price of 201.61 Swedish kronor ($21.13) each.

On April 19, shares of SKF traded around 170 kronor for a market cap of 70.13 billion kronor. According to the GF Value chart, the stock is modestly undervalued. 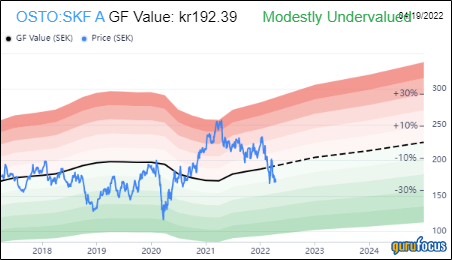 The company has a GuruFocus financial strength rating of 6 out of 10 and a profitability rating of 8 out of 10. Warning signs include declining revenue per share and an Altman Z-Score in the grey zone, while positive signs include ROIC that is consistently higher than WACC, indicating value creation. 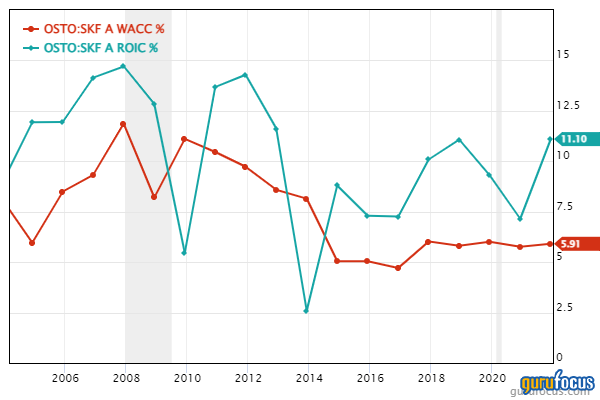 Based in Finland, Kemira is a global supplier of chemicals for business in water-intensive industries. It operates in two segments: pulp/paper products and industry/water.

On April 19, shares of Kemira traded around 12 euros for a market cap of 1.84 billion euros. According to the GF Value chart, the stock is modestly undervalued. 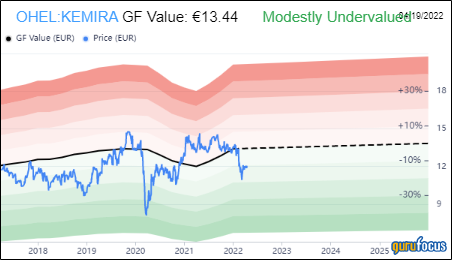 The company has a GuruFocus financial strength rating of 3 out of 10 and a profitability rating of 7 out of 10. Warning signs include a low cash-debt ratio of 0.14 and a distressed Altman Z-Score of 1.98, while positive signs include ROIC typically exceeding WACC. 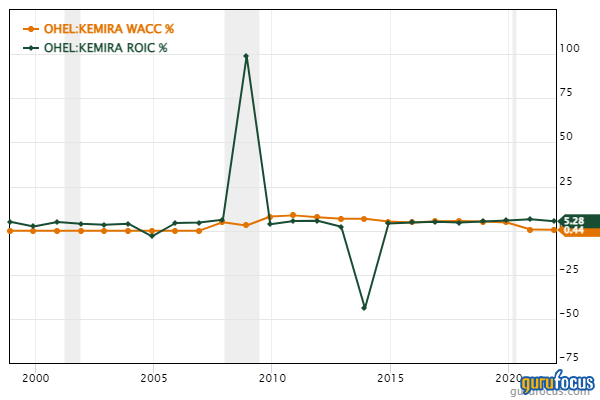 MIL:IVG, Financial), giving it a weight of 0.32% in the equity portfolio. During the quarter, shares averaged 8.33 euros apiece.

Iveco is an Italian automotive manufacturer that produces commercial vehicles as well as powertrain technologies and mass transit, defense, construction and firefighting vehicles. 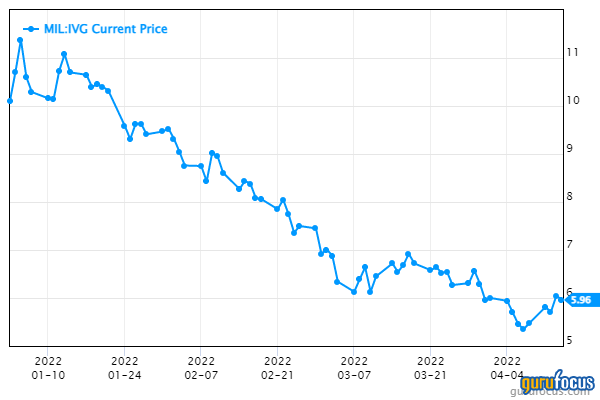 The company has a GuruFocus financial strength rating of 3 out of 10 and a profitability rating of 2 out of 10. There is not much publicly available financial information on the company yet, since it just went public at the beginning of this year. The cash-debt ratio is low at 0.08. 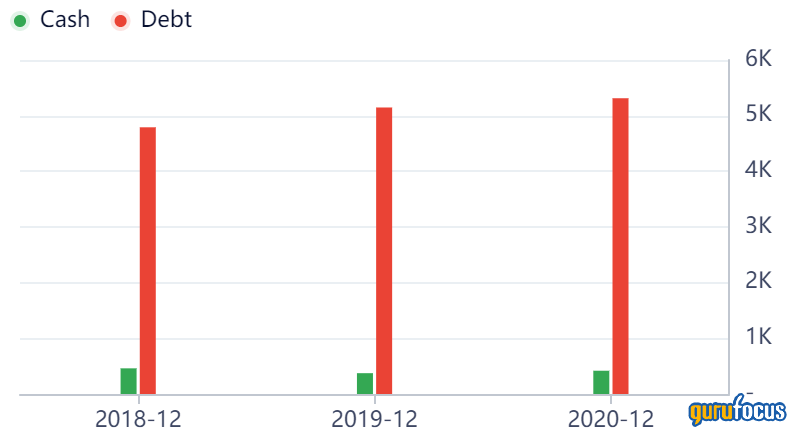 As of the end of the quarter, the fund’s latest NPORT-P reported long holdings in 95 common stocks valued at a total of $5.96 billion. The turnover for the quarter was 5%.

In terms of sector weighting, the firm was most invested in consumer defensive, financial services and industrials stocks.

Global businesses are moving their information technology workloads at a rapid pace to the cloud. The global cloud computing market…

GuruFocus had the pleasure of hosting a presentation with Shree Viswanathan, the founder of SVN Capital. After growing up in…