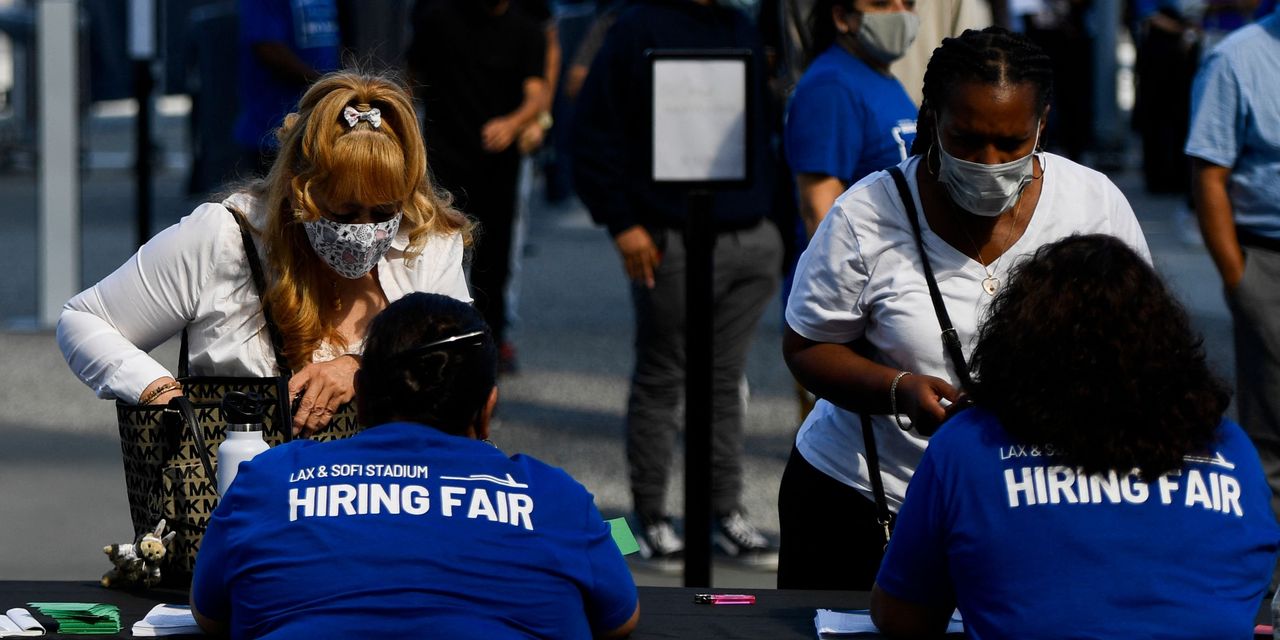 Unemployment claims are trending near the lowest levels since the Covid-19 pandemic hit in the spring of 2020, as companies are reluctant to lay off workers amid labor shortages.

Economists surveyed by The Wall Street Journal estimate jobless claims ticked up to 300,000 last week from a pandemic low of 293,000 a week earlier. Claims, a proxy for layoffs, are holding well below a recent peak of 424,000 in mid-July but remain above 2019’s weekly average of 218,000.

Claims could return to their pre-pandemic levels by the end of the year, said Robert Frick, corporate economist at Navy Federal Credit Union. “Employers are clinging to employees given it’s so hard to hire, it’s so hard to retain,” Mr. Frick said.

Job openings reached a record high this summer, though they eased in August. The openings are proving difficult to fill, in large part because fewer workers are seeking jobs. The labor force, the supply of people working or looking for a job, declined in September, separate Labor Department data show.

Americans are quitting their jobs at historically high rates, a sign of worker confidence in the job market. About 4.3 million employees quit in August, the highest for records dating to 2000, according to the Labor Department. The increase in workers quitting is also making some employers more eager to retain the employees they have.

Workers who leave jobs voluntarily aren’t typically eligible for unemployment benefits. They are, however, able to move for pay increases. Average hourly earnings for all private-sector workers rose 4.6% in September from a year earlier, the fastest rate of growth since February.

Many economists expect worker shortages to persist, as long-term shifts, including accelerating retirements, reduce the pool of available workers. Some, though, think the severity of the shortages will ease this fall because of an abating pandemic, school reopenings and expiring unemployment benefits.

The number of Americans receiving unemployment benefits overall is shrinking after programs created to respond to the pandemic’s effect on the labor market ended in all states last month.

One of those programs provided payments to gig workers and others typically not eligible to tap unemployment insurance. Another extended payments to people who had exhausted state benefits. In addition, the federal government funded a $300 a week enhancement for all unemployment programs.

Continuing claims, a proxy for those receiving payments, made to all unemployment programs fell to 3.65 million in late September from about 12 million in late August, before the pandemic aid expired nationwide. That data isn’t seasonally adjusted and is reported on a several-week delay. Some states have continued to process continuing pandemic claims in the weeks after programs ended, likely reflecting a remaining backlog in payments.

Stimulus plan: Why Biden ‘very much wants to do a bipartisan deal’

Some Hospitals Charge Up to 10 Times More for Medical Scans Than Others, Study Finds

Some hospitals charge up to 10 times as much as others for standard medical scans, according to the latest analysis…