Heading into a new year, investors are taking a look at their portfolios to determine which stocks were winners and losers in 2021.

With a long list of concerns creating volatility in the market, including new variants of the Covid-19 virus, geopolitical conflicts, rising inflation and supply chain disruptions, it is unsurprising that many gurus saw their top stocks underperform the benchmark indexes last year. ARK Investment’s

Catherine Wood (Trades, Portfolio) is no exception. While her portfolio of exchange-traded funds has managed to find value in this volatile environment among stocks with “disruptive innovation,” some of its largest holdings underperformed the S&P 500 Index.

The guru’s $41.63 billionequity portfolio consisted of 43 stocks as of Sept. 30. A majority of the portfolio was invested in health care stocks at 33.61%, while the technology sector has a weight of 30.25% and the communication services space represents 16.84%.

As of the end of the third quarter, Woods’s five largest holdings, accounting for over half of the equity portfolio, were Tesla Inc. (

Representing 7.36% of the equity portfolio, Tesla (

TSLA, Financial) is Wood’s largest holding. GuruFocus estimates she has gained 193.86% on the investment so far.

The GF Value Line suggests the stock is significantly overvalued currently based on historical ratios, past performance and future earnings projections. 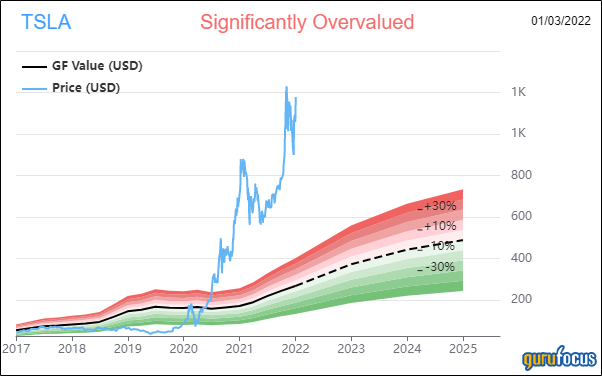 GuruFocus rated Tesla’s financial strength 6 out of 10 on the back of adequate interest coverage and a robust Altman Z-Score of 22.44 that indicates it is in good standing. The return on invested capital, however, is being overshadowed by the weighted average cost of capital, meaning the company is struggling to create value as it grows.

The company’s profitability scored a 4 out of 10 rating despite having strong margins and returns on equity, assets and capital that outperform over half of its competitors. Tesla also has a high Piotroski F-Score of 7 out of 9, which means operations are healthy, and a predictability rank of one out of five stars. According to GuruFocus, companies with this rank return an average of 1.1% annually over a 10-year period.

Of the gurus invested in Tesla,

Accounting for 5.01% of the equity portfolio, Teladoc Health (

TDOC, Financial) is the investor’s second-largest holding. GuruFocus says Wood has lost approximately 53.41% on the investment since the third quarter of 2017.

With a return of -53.61%, the telemedicine company, which is headquartered in Purchase, New York, underperformed the S&P 500 Index by a wide margin.

The company, which provides online health care services, has a market cap of $14.81 billion; its shares were trading around $92.73 on Monday with a price-book ratio of 0.93 and a price-sales ratio of 7.43.

According to the GF Value Line, the stock is a potential value trap currently, so investors need to do their research before making a decision. 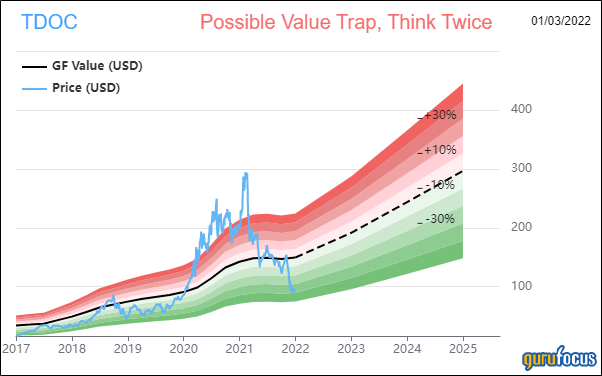 Teladoc’s financial strength was rated 6 out of 10 by GuruFocus, driven by a strong Altman Z-Score of 5.21. Assets are building up at a faster rate than revenue is growing, however, indicating the company may be becoming less efficient.

The company’s profitability fared even worse, scoring a 3 out of 10 rating even though the operating margin is expanding. Teladoc also has negative returns that underperform over half of its competitors as well as a low Piotroski F-Score of 3, indicating business conditions are in poor shape. Revenue per share growth has also slowed down over the past 12 months.

With a 10.28% stake, Wood is Teladoc’s largest guru shareholder.

With 3.82% space in the equity portfolio, Coinbase Global (

COIN, Financial) is the guru’s third-largest stake. GuruFocus data shows Wood has lost an estimated 1.39% on the investment since establishing it in the second quarter of 2021.

Returning -22.43% following its initial public offering in April, the stock underperformed the S&P 500 in 2021.

Based on the Peter Lynch chart, the stock appears to be overvalued. 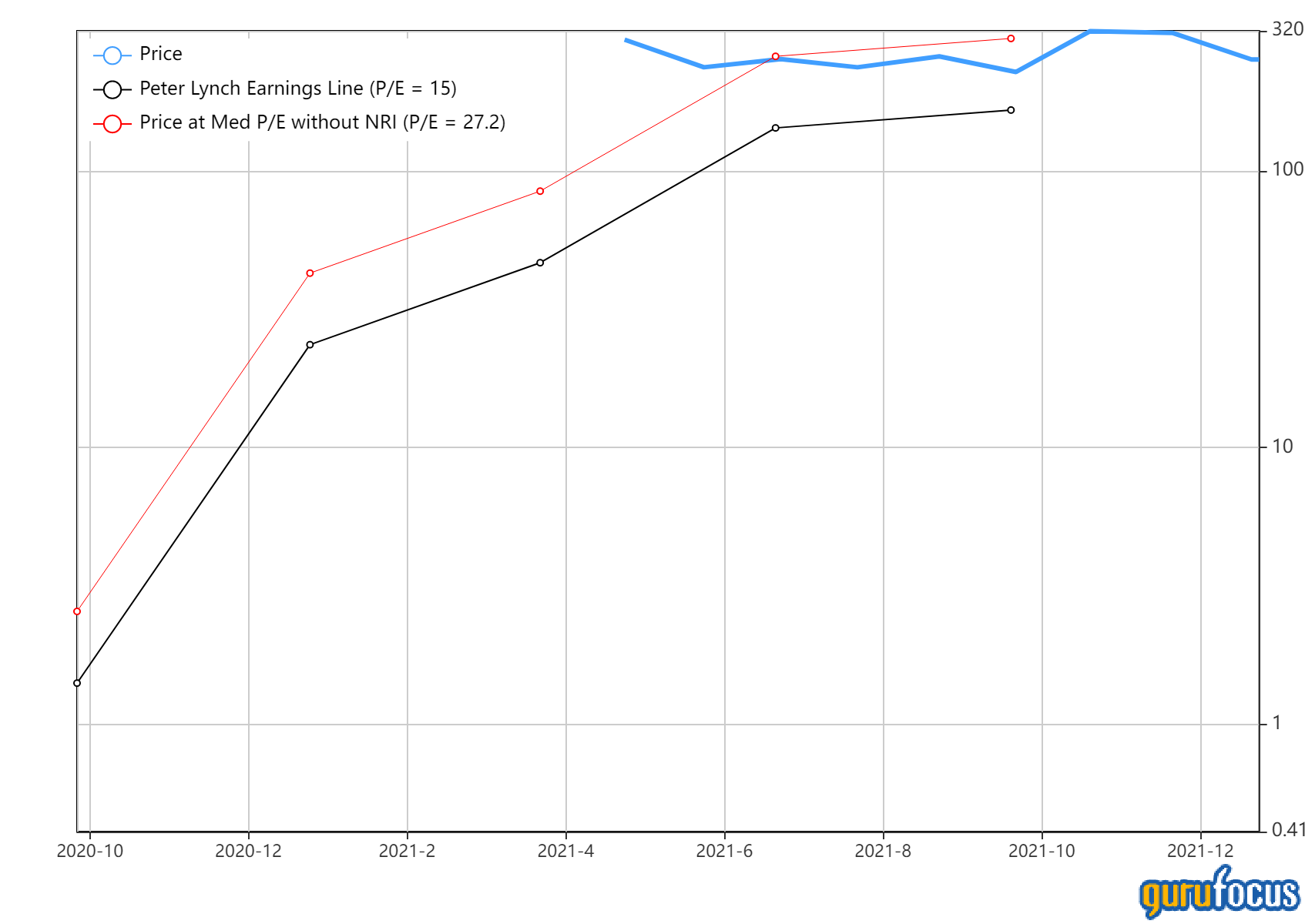 GuruFocus rated Coinbase’s financial strength 5 out of 10. Although the Altman Z-Score of 3.91 indicates the company is in good standing, the Sloan ratio is indicative poor earnings quality. Value creation is occurring since the ROIC eclipses the WACC.

The company’s profitability did not fare as well, scoring a 3 out of 10 rating. Coinbase is supported by strong margins and returns that top a majority of competitors, but it lacks a Piotroski F-Score and predictability rank.

Wood is the company’s largest guru shareholder with a 3.32% stake. Other top guru investors are

U, Financial) is the fourth-largest position in Wood’s equity portfolio. GuruFocus data shows she has gained approximately 22.13% on the investment.

Posting a year-to-date return of -9.64%, the software company headquartered in San Francisco has underperformed the benchmark.

The company, which operates a platform for creating interactive, real-time 3-D content, has a market cap of $40.56 billion; its shares were trading around $138.79 on Monday with a a price-book ratio of 20.16 and a price-sales ratio of 38.11.

Since its public debut in September of 2020, the stock has climbed over 100%. 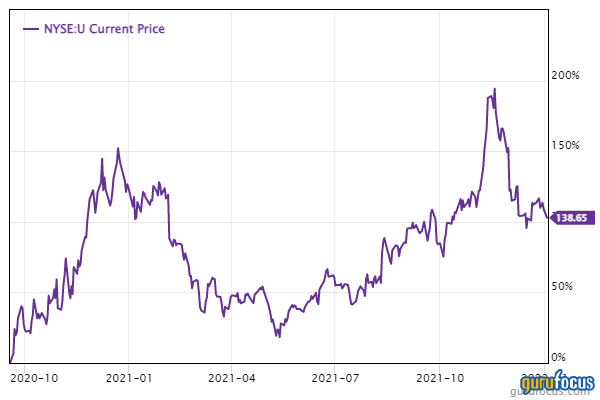 Unity Software’s financial strength was rated 7 out of 10 on the back of a robust Altman Z-Score of 34.92 and debt-related ratios that are outperforming over half of other players in the industry.

The company’s profitability did not fare nearly as well with a 1 out of 10 rating. It is being weighed down by negative margins and returns that underperform a majority of industry peers.

Of the gurus invested in Unity Software, Wood has the largest stake with 4.22% of its outstanding shares. PRIMECAP, Jones and Greenblatt also have positions in the stock.

Coming in at number five, Roku (

ROKU, Financial) represents 3.57% of the guru’s equity portfolio. According to GuruFocus, Wood has gained an estimated 55.74% on the investment.

Returning -29.75% for the year, the San Jose, California-based media company underperformed the index by a wide margin.

According to the GF Value Line, the stock is modestly undervalued currently. 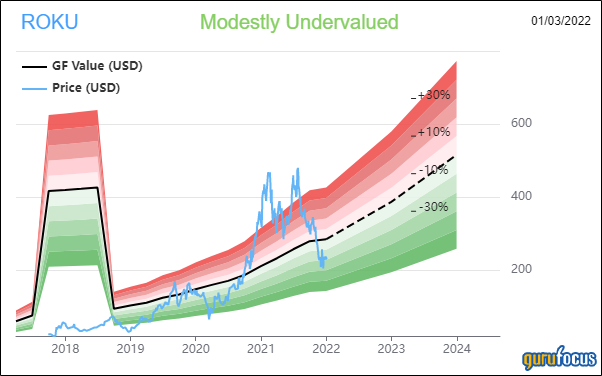 GuruFocus rated Roku’s financial strength 7 out of 10, driven by a comfortable level of interest coverage as well as a high Altman Z-Score of 16.53. While assets are building up at a faster rate than revenue is growing, suggesting inefficiency, value is being created since the ROIC exceeds the WACC.

The company’s profitability scored a 3 out of 10 rating despite having an expanding operating margin and strong returns that top a majority of competitors. Roku also has a high Piotroski F-Score of 7, but revenue per share has declined in recent years.

As with most of her other top holdings, Wood is Roku’s largest guru shareholder with a 3.53% stake.

Autohome: A Value Opportunity From China

Autohome ( ATHM, Financial) (HKSE:02518, Financial) provides an online platform that makes it easy for car buyers to connect with…

Corsair Gaming Inc. ( CRSR, Financial) hasn’t been a public company for very long. A well-known and reputable name in…