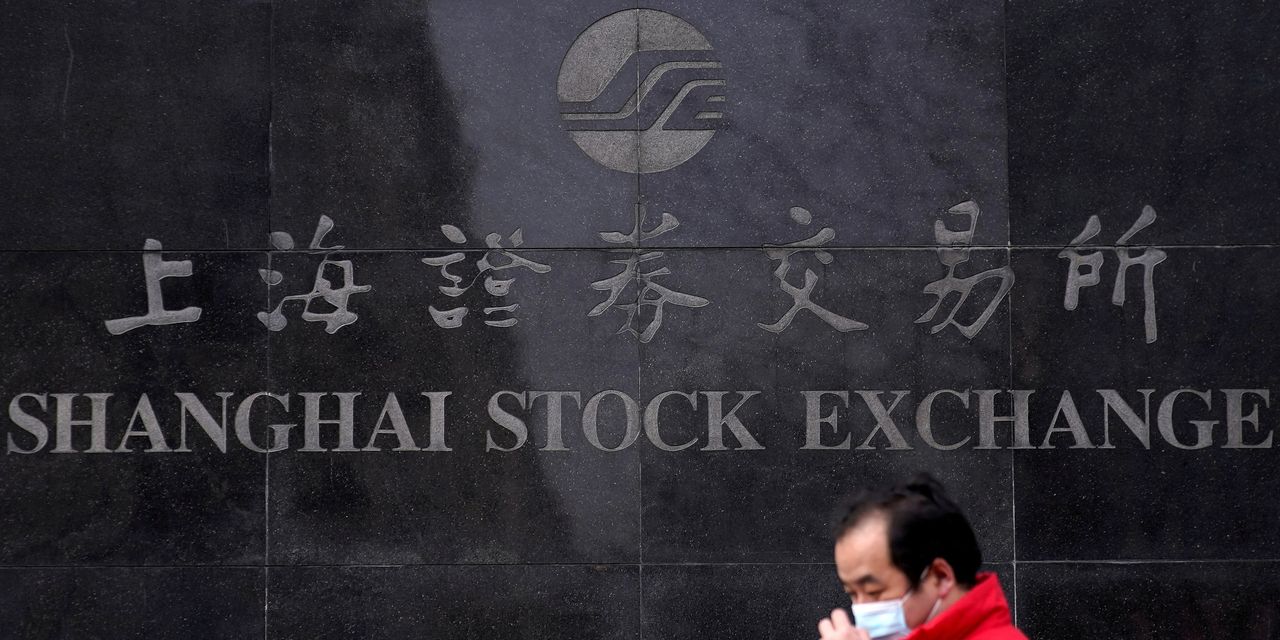 As China struggles to boost consumer confidence and keep the economy humming, some major onshore stock indexes have endured their toughest quarter since the country’s 2015 market crash.

The CSI 300 Index, which consists of the largest companies listed in Shanghai and Shenzhen, lost nearly 15% in the three months to March 31, while the 500-stock Shenzhen Component Index dropped 18%. For both benchmarks, this was the biggest quarterly decline in percentage terms since the third quarter of 2015.

The Shanghai Composite Index, which has more large and less volatile state-owned companies, fell about 11%, its worst performance since the fourth quarter of 2018.

Companies listed in mainland China tend to be more concentrated in sectors that are driven by the domestic economy, unlike Chinese stocks listed in the U.S. and Hong Kong, said Jason Liu of Deutsche Bank. These include businesses operating in areas such as banking, consumer goods and industrials, said Mr. Liu, the Asia head of the chief investment office at Deutsche’s international private bank.

Chinese growth and consumer confidence have been hurt by the country’s battle with the Omicron variant of Covid-19, which has led to widespread lockdowns and factory closures.

“A lot of that has a very direct impact on industrial production, consumer spending and all these very domestic-driven sectors, and I think people can feel that,” Mr. Liu said.

Meanwhile, the war in Ukraine has lifted global commodity prices, in turn eating into the profit margins of consumer-goods companies such as brewers and producers of bottled water.

While many Chinese developers are listed in Hong Kong, rather than onshore, Zhikai Chen, head of Asian equities at BNP Paribas Asset Management, said the sector’s difficulties had a huge secondary impact in the wider economy.

“There is still a huge question mark that now we are here, what is the government going to do? We are now at a point where investors are basically saying, show us the money,” said Mr. Chen.

Onshore stocks fared worse in the first quarter than some offshore counterparts such as Hong Kong’s Hang Seng China Enterprises Index, which fell 8.6%.

A mid-March pledge by policy makers led by Vice Premier Liu He to take a more market-friendly approach helped stem a punishing selloff in offshore stocks.

Indexes such as the Nasdaq Golden Dragon China Index of U.S.-listed Chinese stocks rebounded, but the recovery in onshore stocks was less pronounced.

The Golden Dragon index fell Thursday to end the quarter down nearly 21%. That was still a shallower drop than the 31% pullback it suffered in the third quarter of 2021.

While Mr. Liu’s intervention gave reassurance, no substantial policies have followed, nor has Beijing provided a sufficiently strong stimulus package, said Louis Lau, director of investments at Brandes Investment Partners in San Diego. “I think it was a bit of a disappointment after Liu He spoke out,” he said.

Foreign investors sold a net 45.1 billion yuan, or the equivalent of $7.1 billion, of mainland Chinese stocks via the Stock Connect trading link in March. That was the third-biggest drawdown since the program began in 2014, Wind data shows. Some investors and analysts said that concerns about the geopolitical risk of investing in China have grown after the financial isolation of Russia.

Major U.S. stock indexes suffered their worst performance in two years in the first quarter. The S&P 500 fell 4.9% over the past three months, while the Nasdaq Composite dropped 9.1%.

Write to Rebecca Feng at rebecca.feng@wsj.com

U.S. stock futures hovered ahead of a panel of major central bank officials that is expected to provide insight into…

U.S. stock indexes moved lower and a selloff in technology stocks deepened, as growing investor concerns about the outlook for…