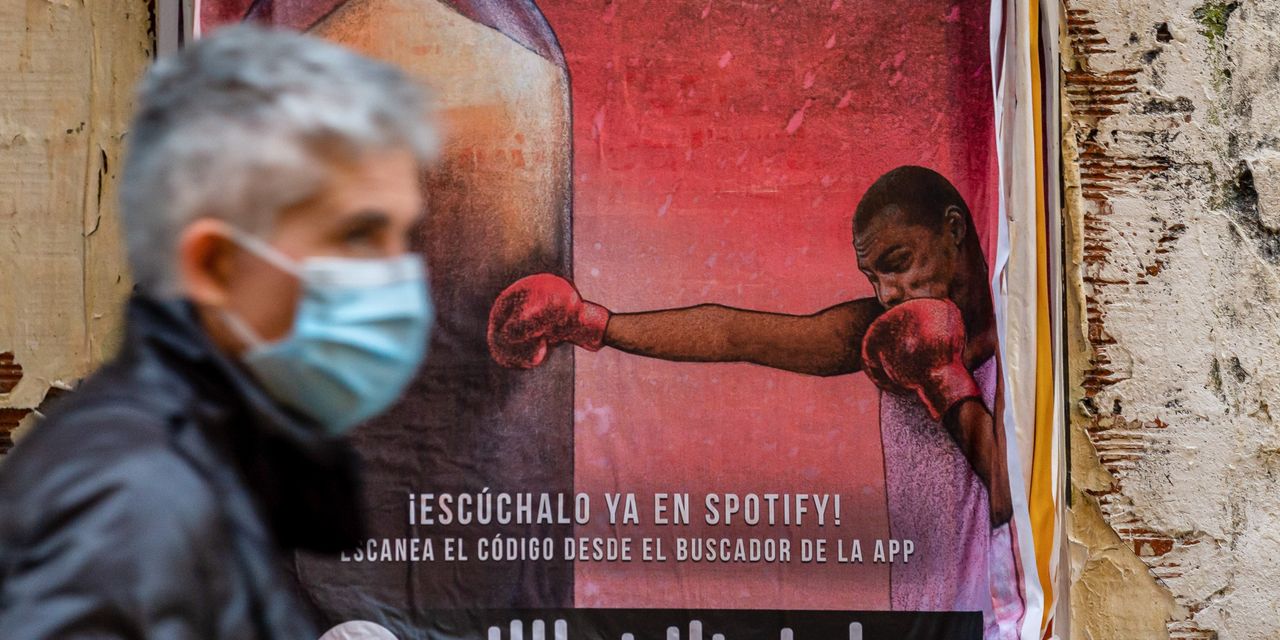 Continued at-home listening of music and podcasts helped Spotify Technology SA post another quarter of strong subscription gains, though overall user growth softened as some of the company’s newest markets face a fierce resurgence of Covid-19.

Streaming content boomed during the pandemic as homebound consumers turned to screens and smart speakers for entertainment. Spotify executives have cautioned that uncertainty lies ahead, however, as the markets it is relying on for growth endure pandemic spikes and listeners in more established markets emerge from lockdowns.

Shares in the company were trading 10% lower Wednesday morning.

“The world isn’t even. In some parts, we’re seeing recovery much faster than others,” said Spotify Chief Executive Daniel Ek. India and Brazil, markets the company has targeted for huge growth, “are still clearly hit,” he said.

For the quarter ended March 31, Spotify reported 356 million monthly active users, up 24% from a year earlier and at the low end of the company’s guidance. Paying subscribers, its most lucrative type of customer, grew to 158 million, up 21% from the same period a year ago and at the top of the range of expectations.

Average revenue per user for the subscription business in the quarter fell 7% to €4.12, the equivalent of $4.98, as the company continued to attract new subscribers via discounted plans and charged lower prices in new markets such as India and Russia.

Last fall, Spotify began raising the price of its family plan in several markets. During the quarter it extended increases to another 25 markets, including in Europe, Latin America and Canada. This week the company notified users of price adjustments in another 12 markets, including for the family plan in the U.S. and the U.K. The company said the increases have shown no negative impact so far.

Overall revenue from subscriptions climbed 14% to €1.93 billion, the equivalent of $2.33 billion. Advertising revenue jumped 46% to €216 million, growing for a third consecutive quarter after sliding in the first half of last year amid pandemic headwinds. Advertising, which accounts for around 10% of overall revenue, has become a particular growth area as the company expands its podcast business.

Spotify now has 2.6 million podcasts available on its service, up from 2.2 million in the prior quarter. Podcast consumption saw a strong increase, the company said, with roughly a quarter of monthly active users listening to a podcast during the period. In March, podcasts hit a record high in the share of overall consumption hours on the platform, the company said.

“The Joe Rogan Experience,” which arrived on Spotify in September and became exclusive to the service at the end of the previous quarter, helped add and engage more users than the company expected, though it didn’t disclose how many.

Mr. Rogan drew some criticism this week after suggesting that healthy, young people don’t need to get a Covid-19 vaccination. That advice runs contrary to the guidance of medical professionals and government health authorities. Mr. Ek wouldn’t comment directly on the episode but reiterated that Spotify has a content policy and removes content that violates it.

Upon review, it was determined the episode didn’t violate the policy, according to a person familiar with the matter. Mr. Rogan said he believed the vaccines are safe, and pointed out his parents were vaccinated. But he also said that his children got the virus and that “it was nothing” for them.

Facing increasing competition in podcasts from rivals including Amazon.com Inc. and Apple Inc., Spotify this week introduced a paid subscription platform for podcasters. Spotify won’t charge for use of the platform, nor collect any portion of podcasters’ subscription revenues for the first two years, it said.

While at-home listening took off during the lockdowns, Mr. Ek has said the company faces uncertainty in consumption habits as many markets around the world emerge from the pandemic. On a call with investors, finance chief Paul Vogel highlighted the company’s strategy of making Spotify available across users’ numerous devices.

“Having our platform and Spotify on as many devices as possible has allowed us to be successful no matter how and where and when you’re using audio content,” he said.

As part of an effort to capture more in-car listening, the company has been testing a device called “Car Thing,” a smart music player that clips to a dashboard and allows voice-activated access to Spotify’s playlists and podcasts. Mr. Ek said early response from consumers is encouraging.

“There are three major use case opportunities for us: in home, on-the-go and in the car. And if you think about in the car, audio versus video has a really big difference potential and that’s incredibly important for us,” he said. “It could make a material difference for our business.”

In all for the first quarter, revenue rose 16% to €2.15 billion, in line with guidance.

The company posted a profit of €23 million, up from €1 million a year earlier. Owing to accounting issues, the company reported a per-share loss of 25 European cents a share, compared with a loss of 20 European cents in the year-earlier period.

Free cash flow—a measure of the cash a company generates from operations, and viewed by many investors as a proxy for performance—was €41 million, a €61 million increase from the year-earlier quarter which was dragged lower by licenser payments.

For the current quarter, the company forecast that monthly active users would grow to between 366 million and 373 million and that premium subscribers would increase to between 162 million and 166 million. It said it expects to generate revenue of €2.16 billion to €2.36 billion.

For the year, Spotify lowered its guidance for monthly active users to between 402 million and 422 million. It kept its subscriber outlook of between 172 million and 184 million and raised its revenue forecast to between €9.11 billion and €9.51 billion.

Write to Anne Steele at Anne.Steele@wsj.com

How to watch the 2021 Academy Awards without cable

An Oscar statue stands during a preview for the Governors Ball during the 91st annual Academy Awards week in Hollywood,…