All of the companies cited were launched between September 2020 and September 2021 with Series A funding. They were then weighted by several different categories and ranked cumulatively, based by BioSpace on the points awarded for each category, which were finance, collaborations, pipeline, growth potential and innovation.

SLGC, Financial) went public through a business combination with the special purpose acquisition company CM Life Sciences, raising $360 million in the process. The company currently trades at just more than $11, off its 52-week high of $14.72, a mark it hit in early November.

The company was founded by Larry Gold, who also started and was chairman of NeXagen Inc., which later became NeXstar Pharmaceuticals Inc. In 1999, NeXstar merged with Gilead Sciences Inc. (

SomaLogic is a leader in proteomics, the study of the structure and function of proteins, including the way they work and interact with each other inside cells. The company raised $214 million in Series A funding in 2020. 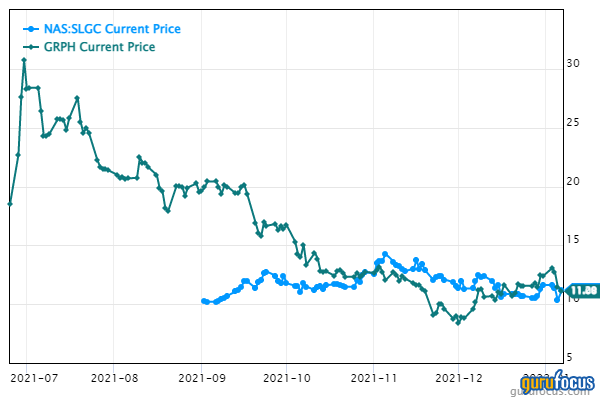 At the time it reported three- and nine-month results, the company raised revenue guidance for full-year 2021 to between $77 million to $79 million.

GRPH, Financial) hit the public markets in late June at an offering price of $17 and traded as high as $34 before plummeting to its current mark of about $11. The four analysts following the company think shares have plenty of upside, assigning it a low target price of $34 and a high of $35. Two rate the company a buy and two tab it as a strong buy.

Graphite is a clinical-stage, next-generation gene-editing company striving to develop a new class of therapies to potentially cure a wide range of serious and life-threatening diseases. Its precision gene-editing approach is aimed at transforming human health through its potential to achieve one of medicine’s most elusive goals: to precisely “find and replace” any gene in the genome.

At December’s annual meeting of the American Association of Hematology, Graphite presented an overview of the phase 1 and phase 2 trial of its lead drug, which will likely be used to treat Gaucher disease and severe combined immunodeficiency syndrome.

Graphic reported a net loss of $14.6 million, or 28 cents per basic and diluted share, for the three months ended Sept. 30.

GuruFocus had the pleasure of hosting a presentation with Chip Rewey, chief investment officer of Rewey Asset Management. In 2018,…