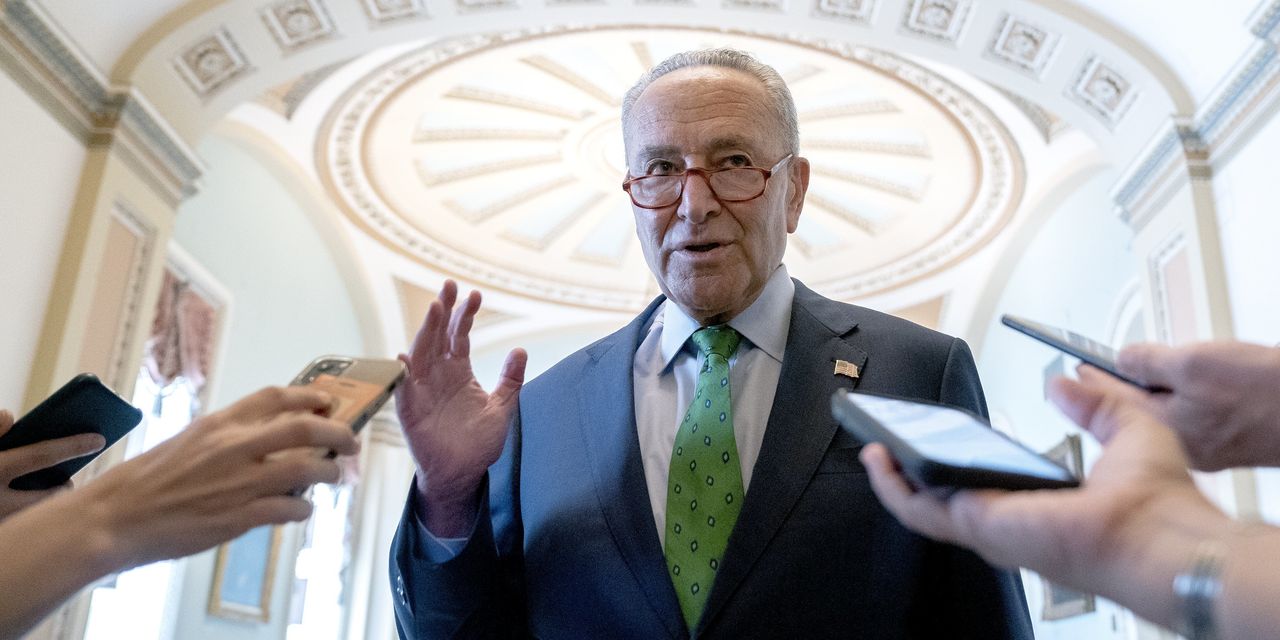 WASHINGTON—Senate Majority Leader Chuck Schumer set up a vote by Wednesday on increasing the federal government’s borrowing ceiling, but didn’t lay out how Democrats planned to pass a bill without Republican votes.

Late Monday, he took steps to have a Senate vote on legislation passed last week by the House to raise the debt ceiling through Dec. 16, 2022. But Republicans already telegraphed that they would block the bill during a vote likely to occur on Wednesday. Sixty votes are needed to clear a procedural hurdle, and the Senate is divided 50-50 between Republicans and Democrats.

“Why should we help facilitate their reckless spending and tax increases?” said Sen. John Cornyn (R., Texas). “If they’re going to do it, they need to do it by themselves.”

Treasury Secretary Janet Yellen has told Congress that the limit must be raised by Oct. 18 or the government won’t be able to pay its bills. A default on the debt could have catastrophic financial consequences, and the pressure on both parties to resolve the issue will likely grow as Congress nears the deadline.

Mr. Schumer didn’t specify in his letter what procedural steps he planned to take to increase the debt ceiling, but said Democrats would discuss the issue at their closed-doors lunch Tuesday.

Republicans have blocked efforts to increase the debt limit on a bipartisan basis, saying Democrats should have to supply the votes on their own, given their decision to pass spending bills without GOP support. In a letter to President Biden Monday, Senate Minority Leader Mitch McConnell (R., Ky.) urged him to “engage directly with congressional Democrats” on raising the debt ceiling.

He emphasized that Democrats could raise the debt ceiling on their own by reopening the reconciliation process, which would allow them to move a bill through the 50-50 Senate with just a simple majority, rather than the 60 votes required of most legislation. “This is the path they will need to take,” Mr. McConnell said.

Mr. Biden, in remarks at the White House, said the U.S. “is a nation that pays its bills and always has.” He called on Republicans to “get out of the way” and let Democrats quickly raise the debt limit. Asked whether he could guarantee that the U.S. would be able to raise the debt ceiling before the deadline, he put the onus on Republicans: “No, I can’t. That’s up to Mitch McConnell.”

Democratic leaders have said trying to address the debt limit through a process tied to the budget known as reconciliation would be risky and time-consuming. However, it remains an option for Democrats, who could decide to revise their budget resolution either to increase the debt limit as a stand-alone bill or fold it into a broader healthcare, education and climate-change package they are writing.

“I’m not going to say anything’s impossible,” said Sen. Dick Durbin (D., Ill.), the Senate Democratic whip, when asked if he was ruling out using the reconciliation process to raise the debt limit. “But the consistent message from our caucus is that would take additional time, a series of votes, and delay.”

While top Democrats have argued against using reconciliation to raise the debt limit, their staff has also consulted with the chamber’s nonpartisan parliamentarian to chart out the process for possibly doing so, according to a person familiar with the efforts.

The new instructions for the fiscal year 2022 budget resolution, which has been approved in both chambers, would have to move through the House as well as the evenly-divided Senate Budget Committee, where Republicans could block it by not showing up and denying the panel a quorum. But provided that Republicans show up and the bill gets a tie vote in the Budget Committee, a simple majority of the full Senate could vote to bring it to the floor, with Vice President Kamala Harris providing the tiebreaking vote.

The Senate would then have to hold a debate and a typically long marathon of amendment votes known as “vote-a-rama”on the newrevised budget resolution. Lawmakers would then write the new legislation increasing the debt limit to a specific figure, and that bill would go through the same process.

Write to Kristina Peterson at kristina.peterson@wsj.com and Alex Leary at alex.leary@wsj.com