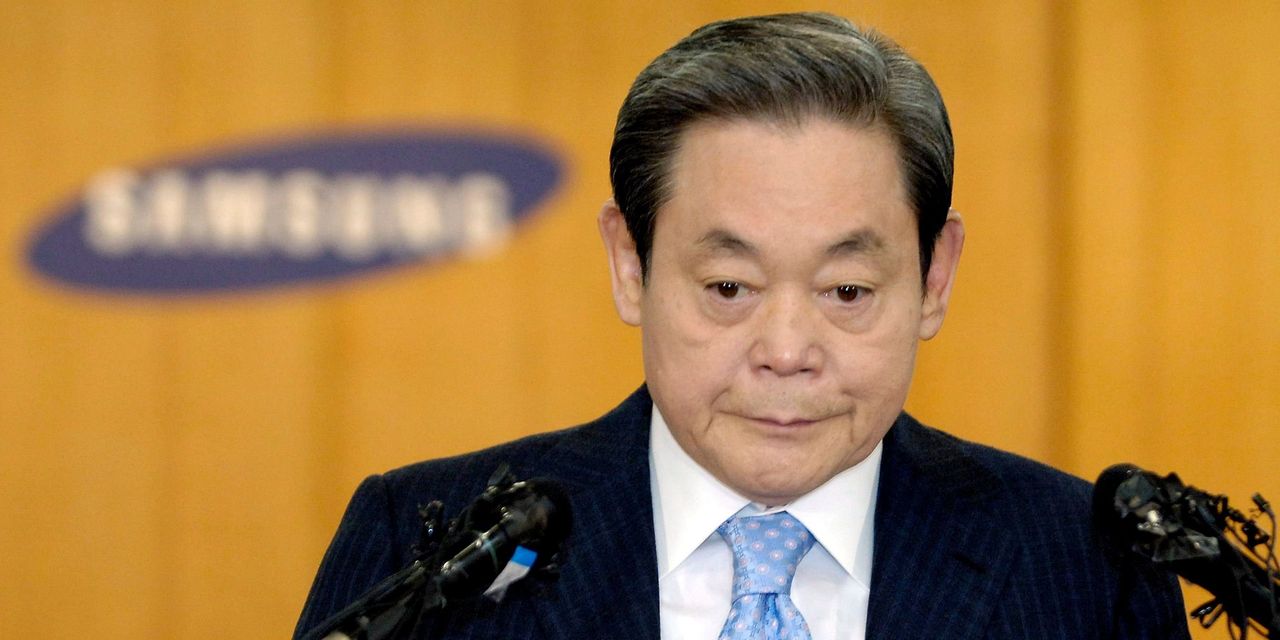 South Korea’s wealthiest family faces more than $10 billion in estate taxes, following the October death of Samsung Chairman Lee Kun-hee. The inheritance tax rate is 50% in South Korea and that can inch higher for the transfer of company shares. Lee Kun-hee’s wife and three children had until Friday to detail how they would pay the bill.

Under local law, the Lees have up to five years to make full payment, which they plan to do in six installments with the first coming this month, Samsung said in a Wednesday statement. The 12 trillion South Korean won inheritance-tax bill, the equivalent to about $10.8 billion, is the country’s largest ever.

“It is our civic duty and responsibility to pay all taxes,” the Lee family said in a statement.

Alongside the tax-payment blueprint, Samsung said the Lee family would commit more than $900 million to build new South Korean medical facilities and pay expenses for children afflicted by cancer or other rare diseases.

Roughly 23,000 pieces from Lee Kun-hee’s private art collection will be gifted to two national South Korean museums. That includes pieces from Pablo Picasso, Salvador Dalí, Claude Monet, plus works of art that include 14 of South Korea’s government-designated national treasures. The donations, which local media said were worth billions of dollars, reduce the taxable portions of Lee Kun-hee’s estate.

Samsung is South Korea’s largest conglomerate with dozens of affiliates, from consumer electronics to life insurance to theme parks. Before his death at the age of 78, Lee Kun-hee had been South Korea’s wealthiest individual, a distinction he had held for the past 12 years, according to Forbes.

His son, Lee Jae-yong, 52, was the country’s fourth-richest person and had led Samsung since May 2014 when his father became incapacitated following a heart attack.

Lee Jae-yong since January has been in prison, after receiving a 30-month sentence in a retrial of his 2017 conviction for bribing South Korea’s ex-president. His prior time behind bars of roughly a year counted toward his new sentence, meaning he could be released in July 2022.

But business lobbying groups this week have petitioned South Korean President Moon Jae-in to issue a pardon to Lee Jae-yong. Samsung, and by extension the country, needs the business tycoon’s leadership during a turbulent time for the semiconductor industry, they said. “The country could lose its No. 1 status in a day,” the business lobbyists wrote in the letter.

The Samsung empire dominates the country’s economy and is South Korea’s biggest exporter. Prior South Korean presidents have given out pardons to business tycoons—including Lee Kun-hee, twice—using the economy or national interests as justification.

Public support in favor of a pardon for Lee Jae-yong, grandson of Samsung’s founder, is strong. Nearly seven out of 10 South Koreans back pardoning him, according to one local poll released this week, with roughly a quarter of respondents opposing.

Samsung, in the Wednesday statement, emphasized the country’s founding philosophy of “contributing to the nation through entrepreneurship.” The Korean-language statement multiple times pledged Samsung’s dedication to “boguk,” or being in service to one’s country.

Beyond the philanthropy and promises to pay, Samsung didn’t offer much detail on how precisely the Lee family would come up with the funds—or even how the late chairman’s shares would be divided up.

The inheritance-tax payment represents more than half of the value of Lee Kun-hee’s total estate, which includes Samsung shares and real estate, the company said. Samsung didn’t specify the actual size of the late chairman’s estate.

Over the decades, the families running South Korea’s largest conglomerates have made the estate payments by shifting money into tax-sheltering foundations, selling off company shares, taking out loans secured by stockholdings or increasing dividends.

A likely option for the Lee family for the first payment would be to sell some Samsung shares and secure a loan, though subsequent installments could alone be covered by using the dividend payouts from the family’s Samsung holdings, said Mike Cho, a business professor at Korea University in Seoul who has long studied generational power transitions by South Korea’s largest conglomerates.

Before returning to prison, Lee Jae-yong, seeking to improve his and Samsung’s image with the public, issued a rare apology over the bribery scandal and other issues related to his succession, while vowing to not pass down his role to his children.

As his family’s direct ownership across Samsung grows smaller, Lee Jae-yong, who goes by “Jay Y.” in the West, will need to increasingly justify having his position based on performance rather than birthright, Mr. Cho said.

“If Jay Y. Lee shows his leadership, and his capability, then he is safe,” Mr. Cho said. “The ownership won’t be that important.”

The Lee family’s estate payment is at least triple what the South Korean government took in last year for all estate-tax revenue, Samsung said.

By comparison, the family of the late LG Chairman Koo Bon-moo, after his 2018 death, owed about $820 million.

When Staff Sgt. Benjamin Butler deployed to Afghanistan in 2012, he remembers the distinct green-and-yellow earplugs the Army issued to…

How Roblox, a video game platform for kids, became a $30 billion company

More than half of the children in the United States play video games on Roblox. In fact, the massively popular…