As far as Covid testing is concerned, Siemens Aktiengesellschaft (

SIEGY, Financial) is bucking the trend. The Healthineers unit of the diversified Munich-based technology company saw its diagnostics revenue climb more than 37% in the second quarter, due in great part to a tripling of its Covid-19 test sales, which came in at more than $717 million, up about 350% from the same period a year earlier.

This outstanding performance comes at a time when most diagnostic firms are cutting back their expected earnings from Covid-19 tests for the remainder of the year, according to an article in Fierce Biotech. Included in that group are Abbott Laboratories (

All three of those companies recently told analysts that they were expecting Covid sales to drop off dramatically after a bang-up first quarter. Thermo Fisher, for example, said it is expecting sales to plummet from $1.68 billion in Q1 to a comparatively meager $225 million in the second quarter before plateauing at around $100 million per quarter for the rest of 2022.

Meanwhile, Siemens expects its Covid testing business to keep rolling. The company thinks its rapid antigen diagnostic test sales will hit $1.4 billion this year. That’s a jump of seven times the number the company projected at the beginning of the year.

Much of Siemens’ Covid diagnostic boost came from the launch of its rapid antigen test in the U.S. in January of this year, which pushed Americas region revenue growth into the high double-digits. The company’s Europe, Middle East and Africa markets recorded comparable gains, though revenues from Asia and Australia dropped a bit owing to China’s renewal of its strict anti-pandemic public health policies. 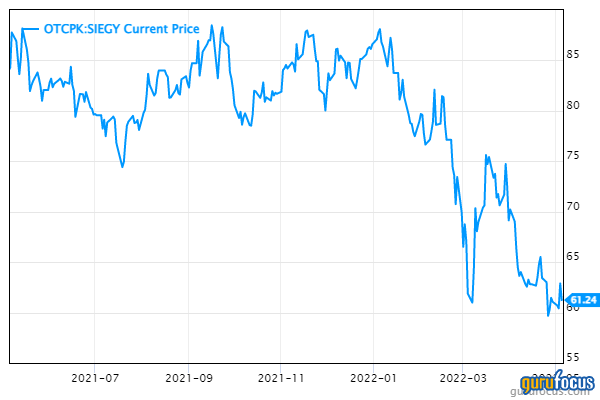 Caption: Siemens stock has been on a slippery slope in the past year

Thanks to the diagnostics contribution, Siemens reported total revenue of about $5.8 billion in its fiscal second-quarter report, up about 16% compared to the same period a year earlier. Looking ahead, the company raised its earnings forecast for the year, estimating growth of at least 5.5% to 7.5%, up from its earlier estimate of 5%.

Healthineers is one of six Siemens business, the others being Gas and Power, Smart Infrastructure, Digital Industries, Mobility and Renewable Energy. Gas and Power generates the most revenue, while Health Care is the second most profitable.

Siemens stockholders undoubtedly welcome any good news. They’ve seen the value of their shares drop by nearly one-third in the past year; today the stock trades at just under $61 compared to its 52-week high of $89.66.

But investors may take hope from Wall Street forecasts. The 20 analysts offering 12-month price forecasts for Siemens have a median target of $94.88, with a high estimate of $112.78 and a low estimate of $63.44. They rate the company a buy, according to Yahoo Finance. The company also pays a dividend that yields 3.6%. while shareholders wait for a rebound.

2 Highly Profitable Railroads to Buy on a Pullback

The companies in the railroad industry in the U.S. have several benefits that those in other industries do not. For…

Most food companies received a substantial Covid-19 pandemic lockdown boost during the 2020 calendar year, but that made 2021 comparable…