The guru’s New York-based firm implements a bottom-up research process to find small and mid-size growth companies with open-ended opportunities and significant competitive advantages to invest in for the long term while they are trading at attractive prices. Baron, who manages the Baron Asset Fund, the Baron Growth Fund and Baron Partners Fund, is also known for ignoring short-term market fluctuations, especially when he believes the fundamental reasons for purchasing the stock have not changed.

According to GuruFocus Real-Time Picks, a Premium feature, the firm picked up 1.77 million shares of the McLean, Virginia-based satellite communications company on Dec. 31, impacting the equity portfolio by 0.17%. The stock traded for an average price of $41.29 on the day of the transaction.

Baron’s firm now holds 13.4 million shares total, accounting for 1.25% of the equity portfolio. GuruFocus estimates the firm has gained 148.64% on the investment since establishing it in the second quarter of 2014.

The company, which provides voice and data communications services via its network of low-orbiting satellites, has a $5.25 billion market cap; its shares were trading around $39.53 on Monday with a price-book ratio of 3.97 and a price-sales ratio of 8.8.

The GF Value Line shows the stock is significantly overvalued currently based on historical ratios, past performance and future earnings projections. 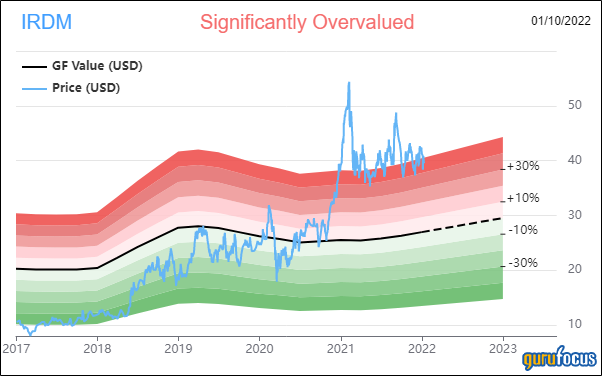 The company reported its third-quarter financial results on Oct. 19. Iridium posted an earnings loss of 2 cents per share on $162.2 million in revenue. Both figures were up from the prior-year period, resulting in it raising its outlook for the full year. 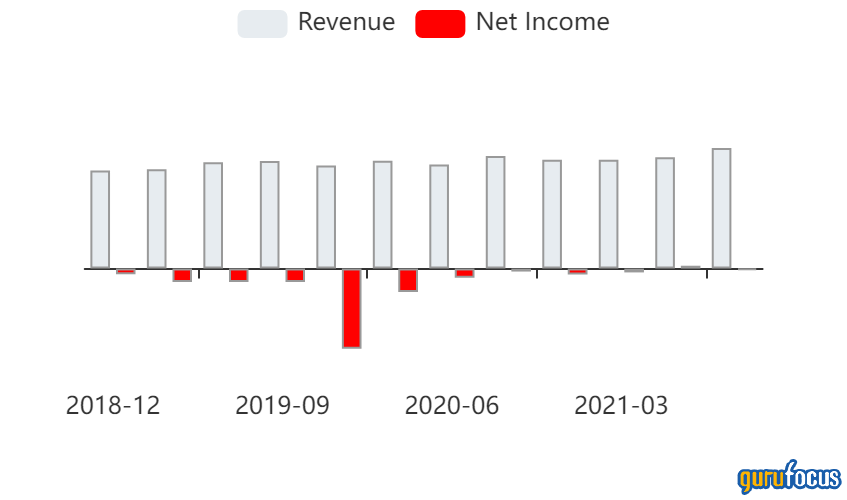 Iridium is expected to report its fourth-quarter and full-year 2021 results next month.

GuruFocus rated Iridium’s financial strength 3 out of 10 on the back of weak interest coverage. The Altman Z-Score of 2.14 suggests the company is under some pressure. The return on invested capital also eclipses the weighted average cost of capital, meaning the company is struggling to create value while growing.

The company’s profitability scored a 6 out of 10 rating. In addition to a declining operating margin, its returns on equity, assets and capital are negative and underperform a majority of industry peers. Iridium also has a high Piotroski F-Score of 7 out of 9, suggesting business conditions are healthy, and a predictability rank of one out of five stars. GuruFocus data shows companies with this rank return an average of 1.1% annually over a 10-year period.

Of the gurus invested in Iridium, Baron has the largest stake with 10.14% of its outstanding shares.

Baron’s $44.15 billion equity portfolio, which was composed of 397 stocks as of the end of the third quarter, is most heavily invested in the consumer cyclical, technology and health care sectors.

Another telecom company the firm owned as of the three months ended Sept. 30, 2021 was Liberty Broadband Corp. (

Schlumberger Ltd. (NYSE:SLB), a leading supplier of products and services to the oil and gas industry, reported on Friday that…

According to the Good Companies Screen, a Premium value screen nested under the All-in-One Screener, five good companies that have…