That was a question I asked almost a year ago. After all, it was a company that generated a significant amount of revenue from brokerage fees.

The short answer is yes. Financial statements issued this year show the company continuing to grow both its top and bottom lines. Indeed, it is prosperous enough to have set aside nearly $2.5 billion for acquisitions, a dividend increase and a billion dollars’ worth of share buybacks.

As the following 10-year chart shows, investors also have confidence: 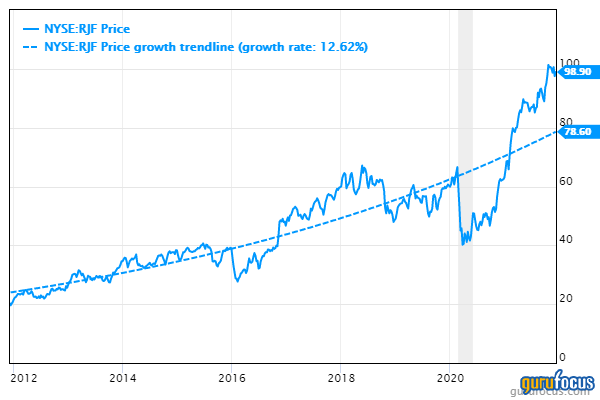 Based in St. Petersburg, Florida, the financial holding company deals in wealth management, investment banking, asset management and commercial banking. Over the past decade, it has grown revenue by an average of more than 10% per year: 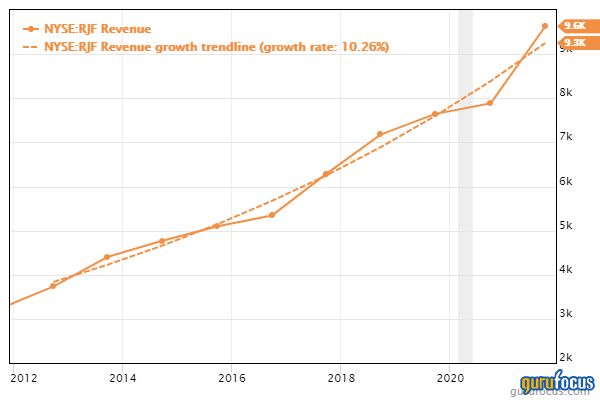 If its recently announced acquisitions close as expected, the company will expand both its footprint and its revenue. On Oct. 20, it announced its intention of acquiring TriState Capital Holdings Inc. (

TSC, Financial) in a deal worth $1.1 billion at the time it was announced.

Raymond James’ Chairman and CEO described the acquisition target this way in a press release: “TriState Capital has a terrific, client-centric franchise focused on serving clients with premier private banking, commercial banking and niche investment management products and services.” The deal could close in 2022 (with no specific date specified).

On July 29, it announced a $387 million deal that would see it acquire the British wealth management company Charles Stanley Group PLC (

LSE:CAY, Financial). This deal was expected to close in the fourth quarter.

The earnings of both acquisition targets are expected to be accretive after their closings.

In its 10-K for 2021 (ending on September 30, 2021), Raymond James stated that the financial services industry, of which it is a part, is intensely competitive. It added:

“Our ability to compete effectively is substantially dependent on our continuing ability to develop or attract, retain and motivate qualified financial advisors, investment bankers, trading professionals, portfolio managers and other revenue-producing or specialized personnel.”

Note that it sees competitiveness as driven by its people, rather than its brand name, products or pricing.

Although it does not name any competitors, there is at least one competitor of which investors should be aware: LPL Financial Holdings Inc. (

LPLA, Financial), which has outperformed Raymond James in the past five years: 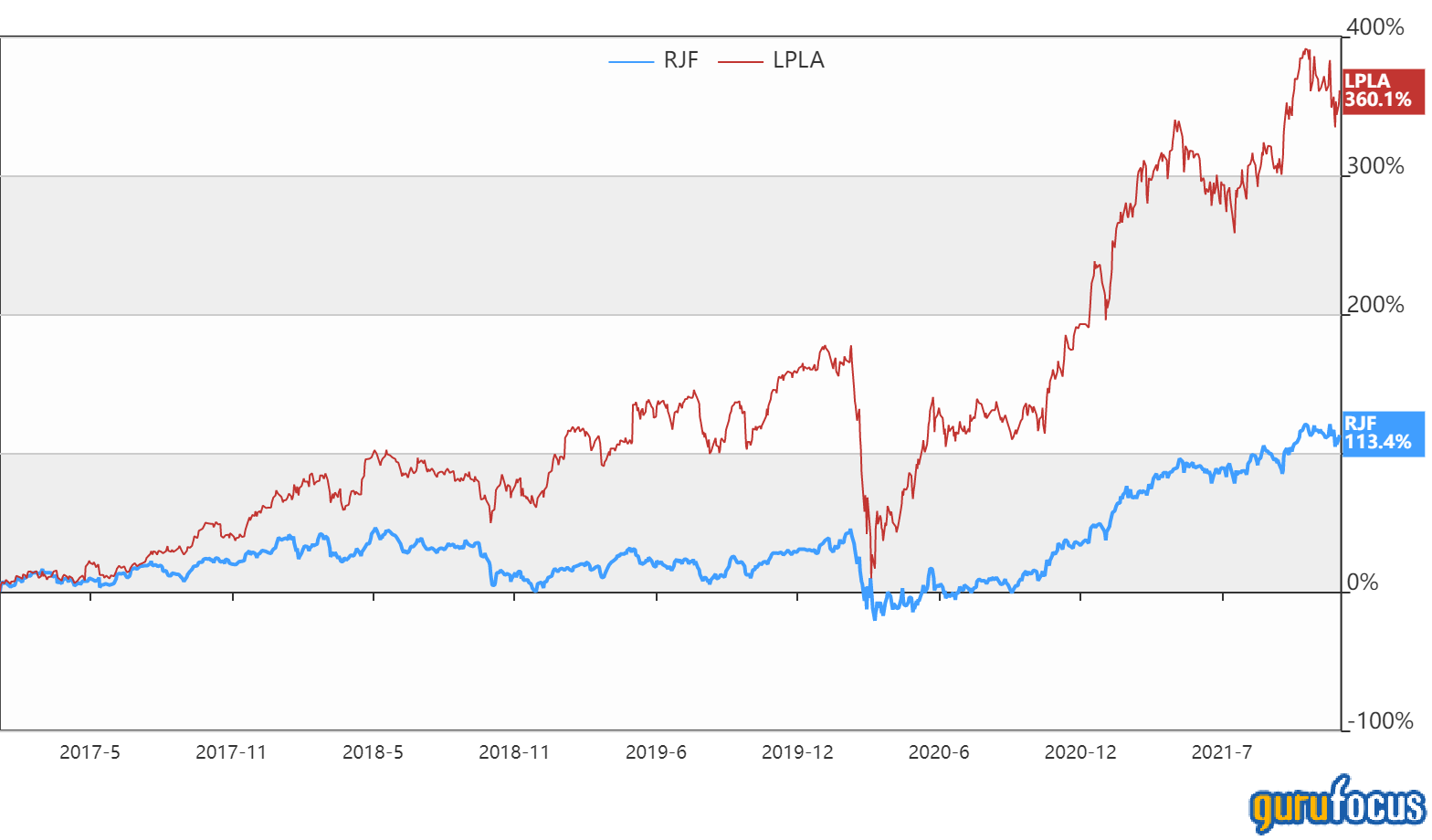 Among the risks noted in the 10-K are the following:

Although Raymond James rates only a 4 out of 10 score for financial strength, it has, as the saying goes, “good bones”: 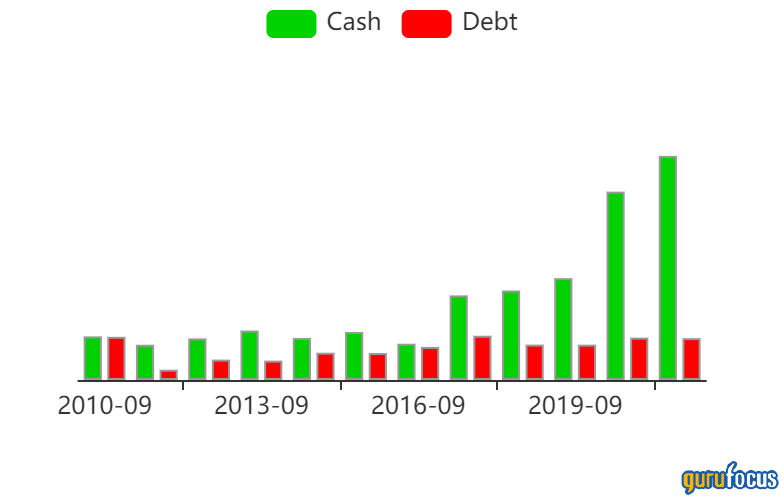 As for free cash flow, we’ve seen evidence already that it must be significant: It has big acquisitions underway, it is increasing its dividend and it has set aside up to a billion dollars for share buybacks.

As the following 10-year chart shows, free cash flow shot up in the past two years: 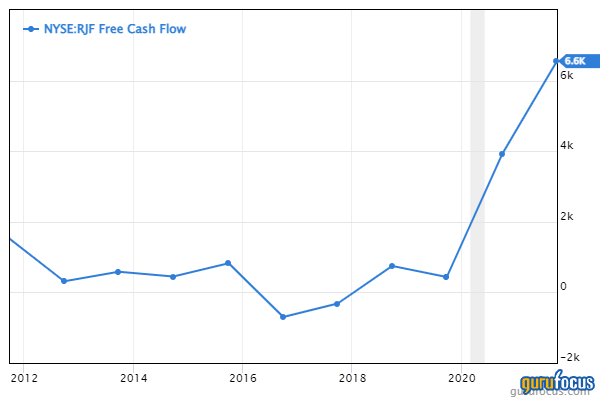 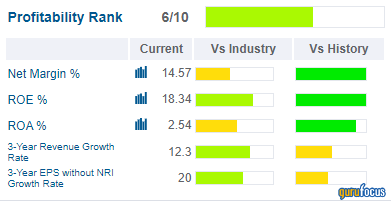 Raymond James receives a 6 out of 10 score for profitability, which again may be on the low side. As we see in the table, its net margin, return on equity and return on assets are near the industry average or above. Looking specifically at its ROE, we see it is ranked higher than 73% of the 748 companies in the industry. And on all three measures, it outperforms its own history.

Here’s what we see for annualized returns on its Summary page at GuruFocus:

At first glance, it appears Raymond James pays only a modest dividend, but this five-year chart shows how the dividend yield fell victim to a rapidly rising share price: 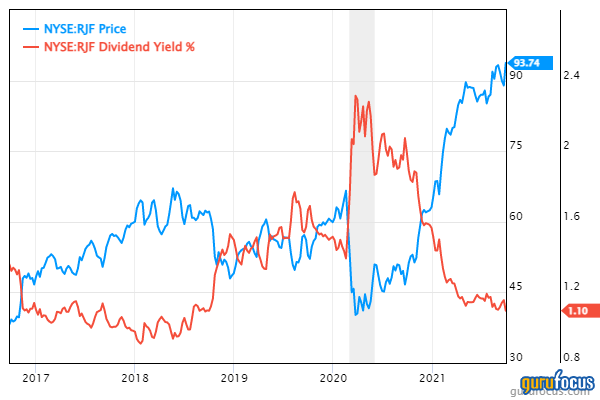 And, to its credit, the company has raised its dividend quite consistently over the past decade: 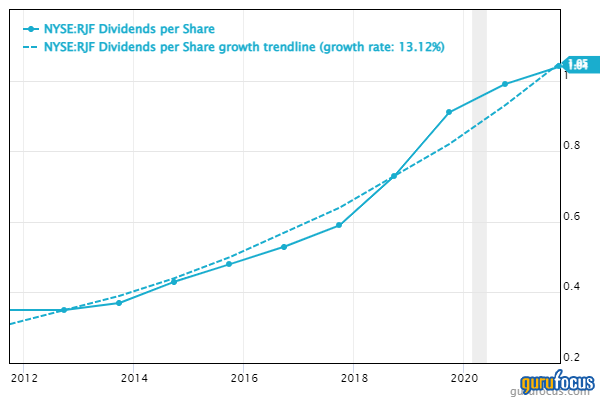 The dividend payout ratio currently sits at 16, which is the lowest it has been in the past 10 years; that means there’s lots of room to grow it in coming years. 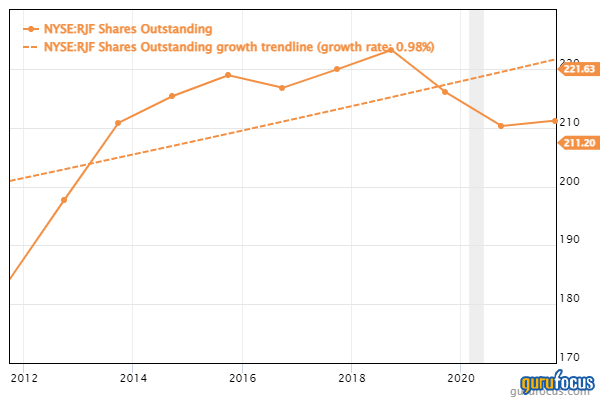 Note that it executed a three-for-two common stock split on Sept. 21 of this year; shareholders received a 50% stock dividend on that date. In a press release, the company said, “The decision to split the stock was made based on a desire to maintain market price and liquidity levels in our stock that are attractive to a broad range of investors.” In other words, it would try to keep the cost per share from rising too much. 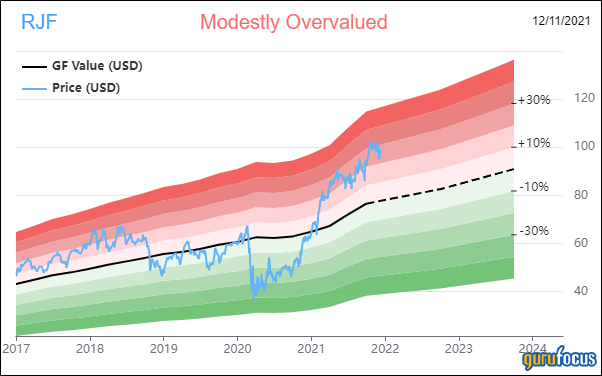 We see a price-book ratio that also signals overvaluation: 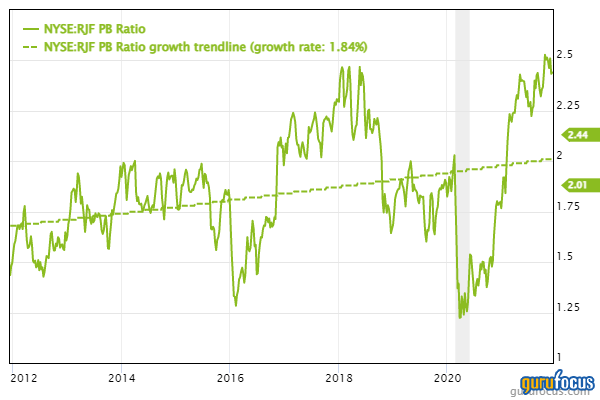 Modestly overvalued, then, is the consensus. Additionally, as this 10-year price chart shows, the price has gotten well ahead of the long-term trend: 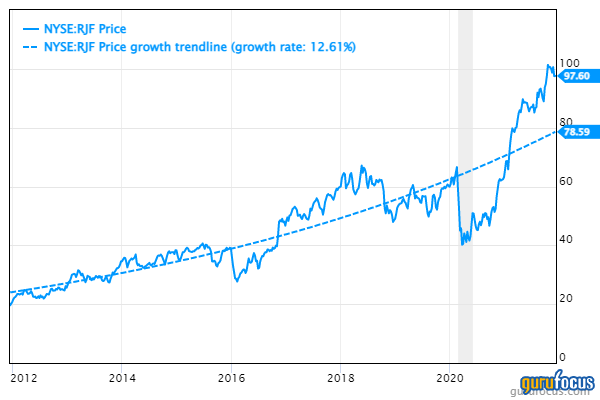 With the exception of a couple of quarters in 2020, when the pandemic began biting, the gurus have bought more often than they have sold:

Eleven of the GuruFocus gurus have positions in Raymond James; the three largest are:

Investors looking for a position in the financial services industry would be wise to put Raymond James Financial on their lists (they might also look at LPL Financial Holdings and its performance over the past five years).

The company enjoys a strong financial position, with much more cash than debt and free cash flow that should help it keep expanding. It is profitable, bringing in an ROE greater than 73% of its peers.

It pays a small dividend now and has repurchased shares reasonably steadily for a decade. Its share price is considered to be modestly overvalued, but perhaps that is to be expected when a company is growing quickly and has a rapidly rising share price.

Frontier and Spirit Airlines Are Merging

Executive Summary As we turn over the page to a new year, there are plenty of decisions that investors will…