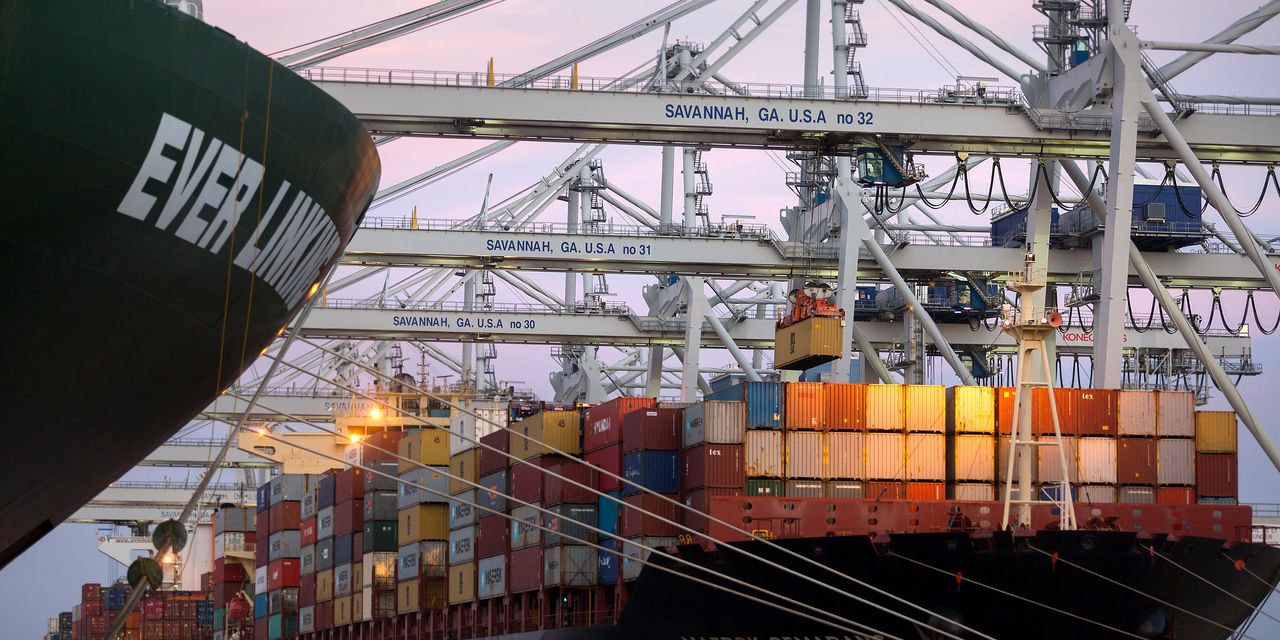 The Port of Savannah, Ga., the fourth-largest U.S. gateway for seaborne imports, is trying to clear a backlog of more than 20 container ships that has grown in the waters outside the port, in the latest logjam to hit the country’s swamped supply chains.

Between 20 and 26 vessels have been idling at a time in the Atlantic Ocean in recent weeks, including 24 that were waiting for berth space at Savannah on Tuesday, port officials said, while containers have stacked up for extensive periods on docks awaiting inland transport.

The backlog is the largest among East Coast ports that generally haven’t faced the kind of congestion that has snarled operations on the West Coast, according to maritime industry officials, including a persistent backup of container ships at the neighboring ports of Los Angeles and Long Beach. That backup measured by the Marine Exchange of Southern California has stretched to as many as 73 vessels this month and counted 66 container ships this week.

Griff Lynch, executive director of the Georgia Ports Authority, which operates the Savannah port, said the critical gateway for goods heading into the U.S. Southeast and Midwest has been inundated with shipments by retailers rushing to restock inventories ahead of the holidays. The loads at times have overwhelmed trucking operations that connect Savannah’s shipments to inland points.

“‘We have seen this transition from just-in-time in supply chains to just-in-case, and that is significantly changing our environment.’”

“Business is booming and e-commerce is booming,” he said. “We have seen this transition from just-in-time in supply chains to just-in-case, and that is significantly changing our environment. Because of all this extra freight being imported, it’s creating a backlog from the ship side to the dock side to warehouses and across the whole supply chain.”

The backup is part of the congestion that has backed up cargo around the world this year as disruptions at ports from China to Europe and the U.S. have sharply slowed the flow of shipments ranging from electronics to manufacturing parts, raising shipping costs and creating periodic shortages of some goods.

At Savannah, imports surpassed the equivalent of 1.8 million loaded containers in the first eight months of the year, a 30.1% increase over the same period a year ago.

The “dwell time” for containers waiting for transport on and off the port has grown from an average of four to five days to as much as 12 days before coming down to 9.2 days this week, said Mr. Lynch.

“At one point we were discharging more containers off vessels than trucks were coming to our gates,” he said.

Top news and in-depth analysis on the world of logistics, from supply chain to transport and technology.

The delays in moving shipping containers are exacerbated by shortages in the special chassis that trucks need to handle the boxes. Savannah shares that equipment in a pool with other Southeast ports, but officials say many of the chassis are tied up at congested warehouses and inland transit points, leaving docks short and containers waiting.

The delays on land leave ships waiting because the port can’t unload inbound boxes until there is room to store them.

Georgia’s port authority moved to address the backups with approval this week of a $34 million plan to accelerate expansion of Savannah’s container storage capacity. The port expects to add space in December to hold 1.6 million more containers, in 20-foot equivalent units, a standard industry measure.

According to the Boston Consulting Group, U.S. ports outside the Southern California facilities in general have shown only a handful of ships waiting offshore. The backup at Los Angeles and Long Beach is having an outsize impact on supply chains because those neighboring ports together handle more than a third of U.S. seaborne imports.

A spokesman for the Port Authority of New York and New Jersey, which manages the largest ocean gateway on the East Coast, said there were seven container ships at anchor off the port on Tuesday and all were expected to dock over the next 48 hours. Spokesman Scott Ladd said container vessels have averaged 1.3 days at anchor this year before heading to berths.

—Paul Berger contributed to this article.

Write to Paul Page at paul.page@wsj.com

U.S. government debt prices rose on Tuesday as investor sentiment was shaken by a fast-spreading new coronavirus strain in the…