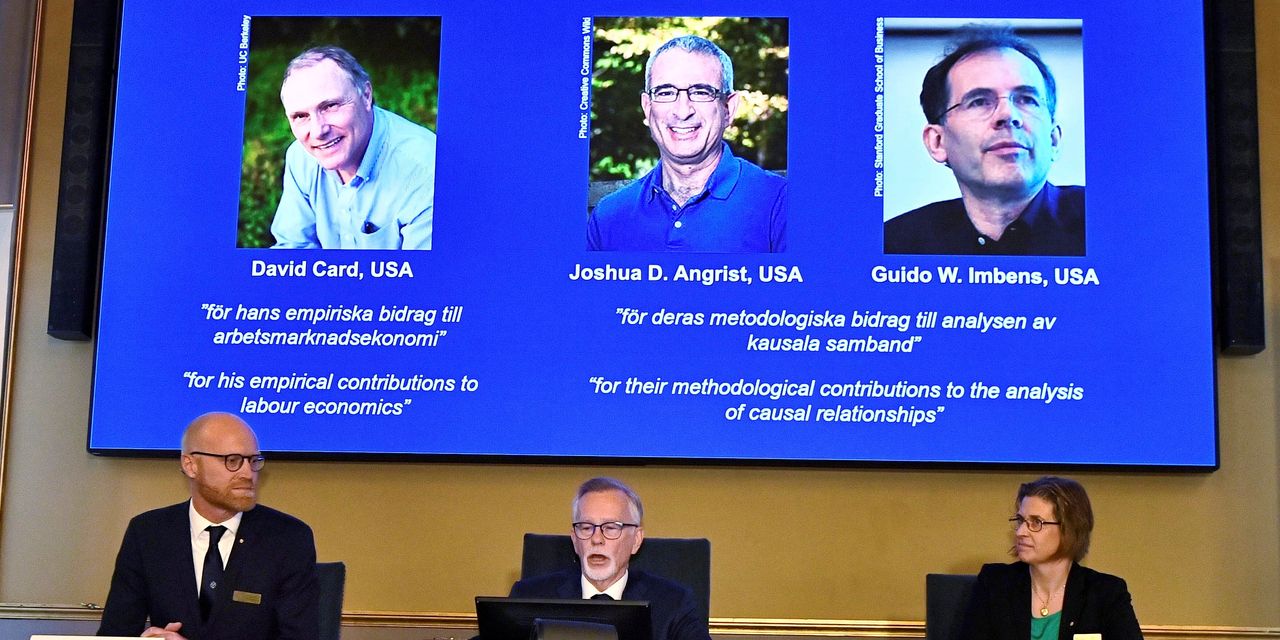 The Nobel Prize in Economic Sciences was awarded to David Card, Joshua D. Angrist and Guido W. Imbens for their work on natural experiments, in particular their contributions to better understanding how the job market works.

Economics and other social sciences have limited opportunities for carrying out the randomized experiments that allow researchers in the physical sciences to test causal relationships, for both practical and ethical reasons.

But over recent decades, the work of the three winners has helped economists make better use of natural experiments, in which some people are randomly subjected to a policy while others aren’t.

“Their research has substantially improved our ability to answer key causal questions, which has been of great benefit to society,” said Peter Fredriksson, chair of the Economic Sciences Prize Committee.

For instance, in one paper, Mr. Card and his co-author, Alan Krueger, looked at an increase in New Jersey’s minimum wage to $5.05 an hour from $4.25.

The two economists compared restaurants in the state and in neighboring eastern Pennsylvania, and found that there was no fall in employment in the New Jersey restaurants subject to the higher minimum wage.

The idea of using natural experiments to look for causality has revolutionized the field, said Orley Ashenfelter, a Princeton University economist who pioneered the technique and taught Messrs. Card and Angrist.

“I was really surprised at the award because it does seem to suggest that the academy has started to recognize applied empirical economics, which has really become the vast majority of economics now,” he said.

Mr. Angrist, in a 2010 essay, described the shift as “the credibility revolution.”

Earlier economists had relied on models and equations and studied how accurate the models were in describing the world, Mr. Angrist said.

“Whereas the generation that I’m part of and associated with the credibility revolution, we entered the arena with specific questions in mind and then we had a strategy for answering that question using this idea of natural experiments,” he said.

Many economists say the various policy responses to the Covid-19 pandemic have thrown up a large number of natural experiments that can be used to explore causal relationships that otherwise would have been difficult to investigate.

Natural experiments differ from the laboratory experiments that physical scientists use to test their theories in that economists can’t choose the subjects that take part.

The Royal Swedish Academy of Sciences said Messrs. Angrist and Imbens had advanced the understanding of the conditions under which natural experiments can help to establish causal links.

“They showed it is possible to estimate a well-defined causal effect of an intervention, even when the researcher cannot control who takes part in the intervention,” said Eva Mörk, an economics professor at Sweden’s Uppsala University.

The three economists have worked together on papers, and Mr. Imbens said Mr. Angrist had been best man at his wedding.

“I was just thrilled to hear the news, particularly hearing that I got to share this with Josh Angrist and David Card,” said Mr. Imbens. “They’re both very good friends of mine.”

Mr. Angrist said he had originally planned to spend Monday on a short vacation on Cape Cod before seeing a deluge of congratulatory text messages.

“I was trying to squeeze in the last day of the sailing season down on the Cape so I wasn’t really focused on this,” he said.

Write to Paul Hannon at paul.hannon@wsj.com and David Harrison at david.harrison@wsj.com

Check out the companies making headlines in midday trading. Subscribe Blackberry — Shares of the tech company were down 4%…

Boeing charged with criminal conspiracy and fined $2.5 billion for coverup over 737 Max crashes