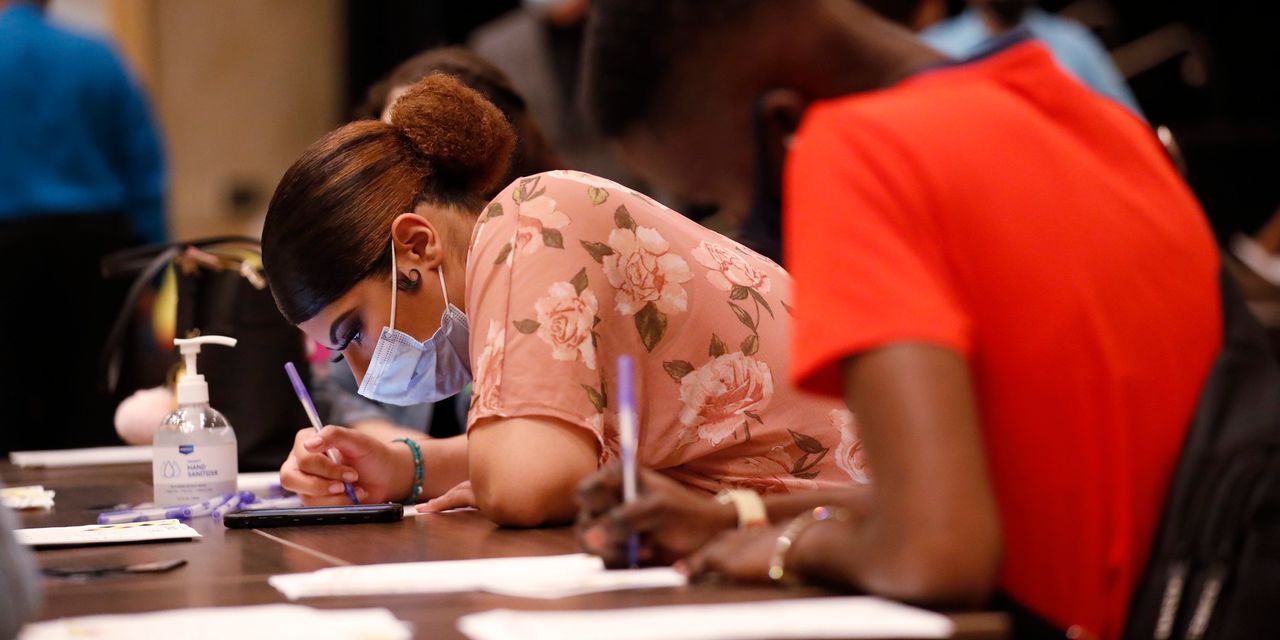 The Labor Department reported that initial unemployment claims for regular state programs, a proxy for layoffs, fell 38,000 last week to 406,000 from 444,000 the prior week. The level represents the lowest levels of claims since the coronavirus pandemic’s onset last year and the fourth consecutive week claims have reached a fresh pandemic low.

The jobless claims report is among the data pointing to an economy that is gaining strength as Covid-19 cases steadily decrease, more Americans receive vaccines against the virus and governments ease restrictions on businesses.

“I think there’s still a lot of pain out there, but the good news is that it really looks like the economy is kicking into overdrive, and I do see positive signs for the job market,” said Beth Ann Bovino, chief U.S. economist at S&P Global Ratings.

Dr. Bovino noted that U.S. employment overall is down by more than eight million jobs compared with pre-pandemic levels. Meanwhile, initial jobless claims remain higher than before the pandemic, and the number of Americans continuing to receive unemployment benefits through regular state programs increased in the week ended May 8 compared with the prior week.

As of early May, nearly 16 million Americans were continuing to claim benefits through all unemployment programs, including special programs designed to support workers through the pandemic. Some businesses and Republican lawmakers have recently expressed rising concern that one of those programs, which provides benefit recipients with a $300 federal supplement, may be constraining employers’ ability to hire workers.

Surveys suggest the benefits are among several reasons many workers remain out of the job market, despite continued high unemployment. Other reasons include fears of contracting Covid-19, schools remaining closed or only partially reopened, and lack of skills needed for the available positions. The Labor Department reported employers added just 266,000 jobs last month, compared with the one million economists had expected.

Tim Bridges, owner of The Cleaning Authority in Troy, Mich., said demand for his company’s services has been picking up recently, but that he hasn’t been able to take on new customers quickly because of limited staff.

The company offers home-cleaning services, and new customers currently are waiting four to six weeks to begin appointments, compared with a one- or two-week wait pre-pandemic, Mr. Bridges said.

He said some workers who have turned down his job offers cited enhanced unemployment benefits. Mr. Bridges last year raised the company’s starting wage to $15 an hour, and he said he recently changed company policies to offer staff more flexible schedules in an attempt to attract additional workers. He said he has hired five new workers over roughly the past two months, bringing his total number of staff to 28, but is still looking for more.

“It’s a more competitive marketplace to find employees. We’re doing everything we can,” he said.

Stephen Stanley, chief economist at Amherst Pierpont Securities, said constraints on the supply of labor should ease as enhanced unemployment benefits end—with some states soon phasing them out and with the program overall set to expire in early September—and as more people become vaccinated and schools reopen, potentially alleviating some Americans’ lingering health and child-care concerns.

“I think more and more people will get out there and search for jobs and that should help both alleviate stress in the job market and accelerate the pace of reported job gains,” he said.

Supply-chain disruptions are likely also limiting companies’ ability to hire, said Robert Frick, corporate economist at Navy Federal Credit Union. He said employers must also adjust to a hiring landscape that is fundamentally altered because many workers’ preferences and habits have changed over the course of the pandemic.

“When something crashes in the economy, it’s going to be built back differently. Right now, we’re in the process of figuring out what’s the same and what’s different,” Mr. Frick said. “People are figuring out, ‘Is my job gone for good?’ and may also be thinking, ‘Do I want to go back to my job?’”

Chief financial officers are embracing sustainability measures as a way to attract new investors, lower their companies’ borrowing costs and…

McKinsey & Co.’s partners voted to replace Kevin Sneader as its global managing partner amid fallout from a series of…