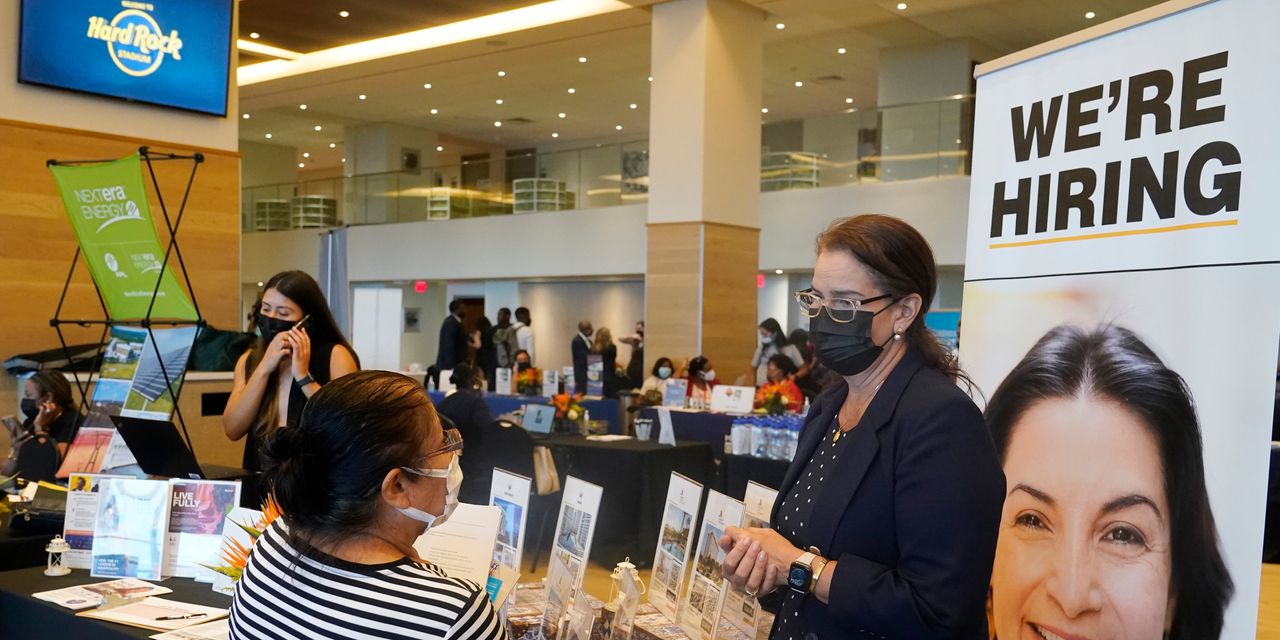 Filings for jobless benefits last week are estimated to have fallen for the first time in four weeks, as employers continue to eschew layoffs amid a tight labor market.

Economists expect the Labor Department will report Thursday that initial unemployment claims, a proxy for layoffs, moved lower in the week ended Oct. 2 to a seasonally adjusted 345,000 from 362,000 the prior week, when claims rose by 11,000.

Claims ticked up during September, in part because of accounting issues in California and supply shortages in Michigan that led to short-term layoffs in the auto industry. Still, claims remain near their lowest levels since the coronavirus pandemic’s onset, as the number of job openings in the U.S. has continued to outpace the number of unemployed workers. Many employers have reported strong demand for workers, but difficulties filling open positions.

“When you filter out the noise and temporary factors, employers are still holding on to the workers they have, knowing that if they let them go, they are going to be very hard to replace,” said Robert Frick, corporate economist at the Navy Federal Credit Union, of the recent trend in jobless claims.

Claims have remained low relative to earlier in the pandemic despite a late-summer surge in coronavirus cases that caused new uncertainties for employers, particularly those that offer in-person services. Hiring in the leisure and hospitality industry was flat during August, and employment gains overall slowed compared with earlier in the summer.

Economists expect Labor Department data to be released Friday will show U.S. employers added 500,000 jobs in September, which would be a pickup from the previous month, when the economy added 235,000 jobs. The unemployment rate is also expected to have fallen to 5.1% last month from 5.2% in August.

Meanwhile, the number of Americans receiving unemployment benefits overall is shrinking after programs created to respond to the pandemic’s effect on the labor market ended in all states last month. One of those programs provided payments to gig workers and others typically not eligible to tap unemployment insurance. Another extended payments to individuals who had exhausted state benefits. In addition, the federal government funded a $300 a week enhancement for all unemployment programs.

Continuing claims, a proxy for those receiving payments, made to all unemployment programs fell to about 5 million in mid-September from about 12 million in late August, before the pandemic aid expired. The data accounting for all programs isn’t seasonally adjusted, and is reported on a several-week delay. Some states are still paying pandemic benefits as they work through backlogs.

The end of enhanced and extended benefits reduced federal spending on such programs. Weekly Labor Department disbursements to states for unemployment programs have fallen sharply since the end of pandemic assistance in early September, to $1.65 billion for the week ending Oct. 1. That is down from $6.2 billion for the week ending Sept. 3 and the lowest weekly amount since the start of the pandemic.

—Anthony DeBarros contributed to this article.

When the federal moratorium on evictions ended in August, many feared that hundreds of thousands of tenants would soon be…

Are There Enough Strawberries in a Strawberry Pop-Tart? A Court Might Decide

What’s in a Pop-Tart? Not enough strawberries, according to lawsuits filed against Kellogg Co. , which makes the pantry staple.…