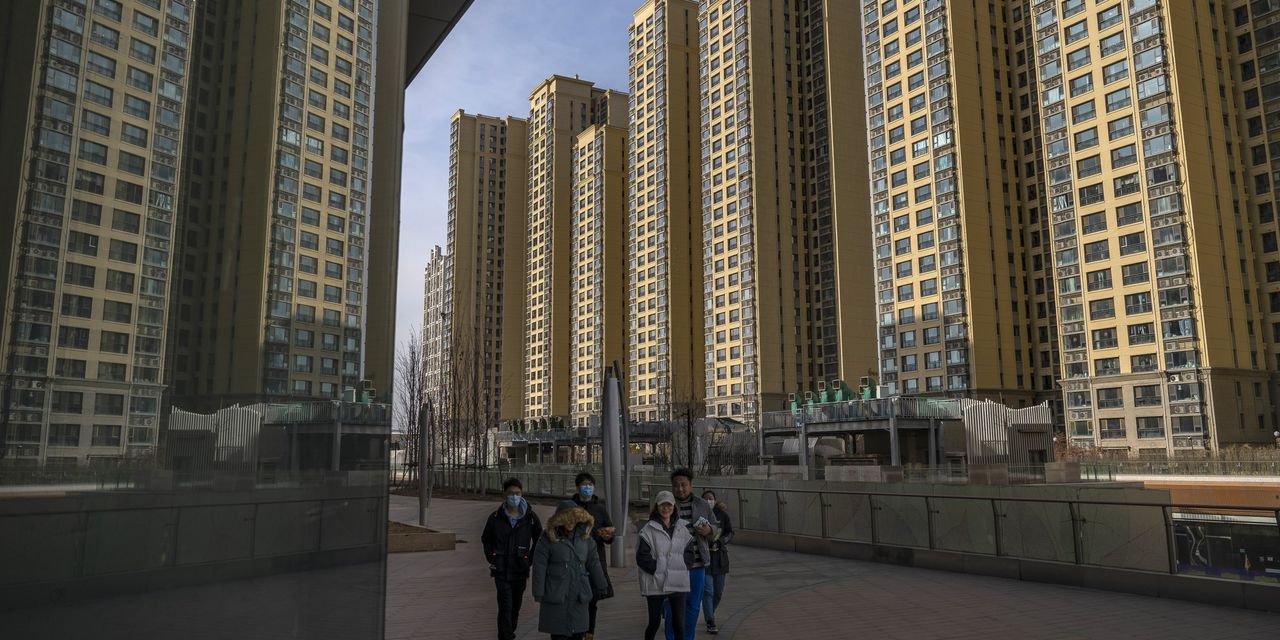 Fund managers are betting creditors will recover far more than the debt’s current prices suggest, despite the likelihood of a complex restructuring. The real-estate company has $20 billion of international bonds outstanding, making it one of the world’s largest distressed-debt investments at the same time low interest rates have investors looking for ways to boost returns.

Buyers range from traditional asset managers such as Vontobel Asset Management in Zurich to distressed-investing specialists such as SC Lowy in Hong Kong and New York-based Apollo Global Management Inc., according to people familiar with the investments.

“There’s so much bad news in the price currently—we see an opportunity,” said Luc D’hooge, head of emerging-markets bonds at Vontobel. The firm also bought debt of other Chinese property developers to increase diversification and reduce risk, he said.

One of Evergrande’s EGRNF 5.26% most frequently traded bonds hit a low of 18.50 cents on the dollar last week before rebounding to about 20, according to MarketAxess. The bond had traded around 30 in September and about 70 in mid-June.

Investors said they bought bonds because they believed that prices had fallen far below what creditors would ultimately recover, or that market sentiment would turn after prices hit recent lows.

Some also bought in anticipation of Evergrande’s default on two dollar-denominated bonds in early December. ​​Bondholders can now demand full repayment and sue to liquidate some of Evergrande’s assets if it doesn’t engage in restructuring talks.

The bargain hunters are wagering that Evergrande’s restructuring will follow market norms and that the Chinese government won’t push foreign-bondholder claims behind those of domestic entities and investors. A restructuring could still take more than a year, given Evergrande’s complex balance sheet and its outsize political and economic significance, fund managers said.

Reported trades of Evergrande bonds totaled about $200 million over the past four weeks, according to MarketAxess, a fraction of the company’s outstanding offshore debt.

A committee of large bondholders organized months ago to bargain with Evergrande and its financial adviser, restructuring specialist Houlihan Lokey Inc. They initially failed to engage in substantive talks with the property developer, which the Chinese government has been moving to dismantle without capsizing the country’s real-estate market.

Bond prices collapsed this autumn, in part because investors feared the cold shoulder they were getting signified that foreign creditors would be last in line to get their money back.

“‘There’s so much bad news in the price currently—we see an opportunity.’”

— Luc D’hooge, the head of emerging-markets bonds at Vontobel

Houlihan and the committee’s advisers, Moelis & Co. and Kirkland & Ellis LLP, started preliminary discussions about two weeks ago but have yet to start negotiating, they said. Evergrande publicly acknowledged on Dec. 3 the need to engage with foreign owners of its offshore debt.

Bond-restructuring talks are expected to be a three-way tug of war between foreign bondholders, Evergrande’s mostly Chinese shareholders and the Chinese government, the fund managers said. Evergrande is majority-owned by founder Hui Ka Yan and his wife, Ding Yumei.

Evergrande’s foreign creditors hope to reach a consensual deal. Some are considering a swap of their debt claims for ownership of the company’s offshore assets, primarily electric-vehicle company Evergrande New Energy Vehicle Group Ltd. and a Hong Kong-based property-management business, fund managers said. Large bondholders might contribute cash to recapitalize the auto maker in such a deal, they said.

If talks fail, Evergrande’s dollar-denominated bonds are governed by New York law and were issued by an entity incorporated in the Cayman Islands, giving creditors access to both legal jurisdictions for asserting their contractual rights.

Such an aggressive strategy could backfire given Evergrande’s close ties to the Chinese state, the fund managers said. Government authorities said in early December that they would step into the company’s restructuring. China and the U.S. haven’t signed treaties that would make a U.S. judge’s decision binding on a Chinese person or entity, according to an international restructuring lawyer.

Do you consider Evergrande debt to be a good buy? Why, or why not? Join the conversation below.

Bondholders have been on tenterhooks since the summer, when signs emerged that Chinese authorities might allow the country’s largest developer to default to rein in the overheated real-estate market.

Evergrande staved off default on its foreign obligations for months while it moved under government supervision to ensure that citizens who had paid the company deposits got properties or refunds. Evergrande also began selling assets at deeply discounted prices as it faced a mounting liquidity crisis, dismaying bondholders who feared little would be left for them to claim when restructuring talks eventually began.

Evergrande has sold stakes in a handful of companies in which it was a controlling shareholder, including Hong Kong-listed Shengjing Bank Co. and HengTen Networks Group Ltd., and it tried to sell a majority stake in its property-management arm Evergrande Property Services Group Ltd. for $2.6 billion to a rival developer in October, but the deal was scrapped after the parties couldn’t agree on final terms.

Foreign bondholders have claims on assets different from those for mainland creditors, who are also seeking repayment. On Thursday, Yi Gang, governor of the People’s Bank of China, said it would urge Chinese companies issuing bonds overseas to meet their debt obligations “in accordance with law and market principles.”

Some analysts still expect the Chinese government to give priority to homeowners and mainland creditors over foreigners.

“China is going to protect its interests first, and offshore investors are going to have to get in line,” said Gila Cohen, chief investment strategy officer of MUFG.

Methane Regulations Are an Easy Win

Stricter federal methane regulations are probably one of the few areas where environmentalists, oil majors and the top oil lobbying…