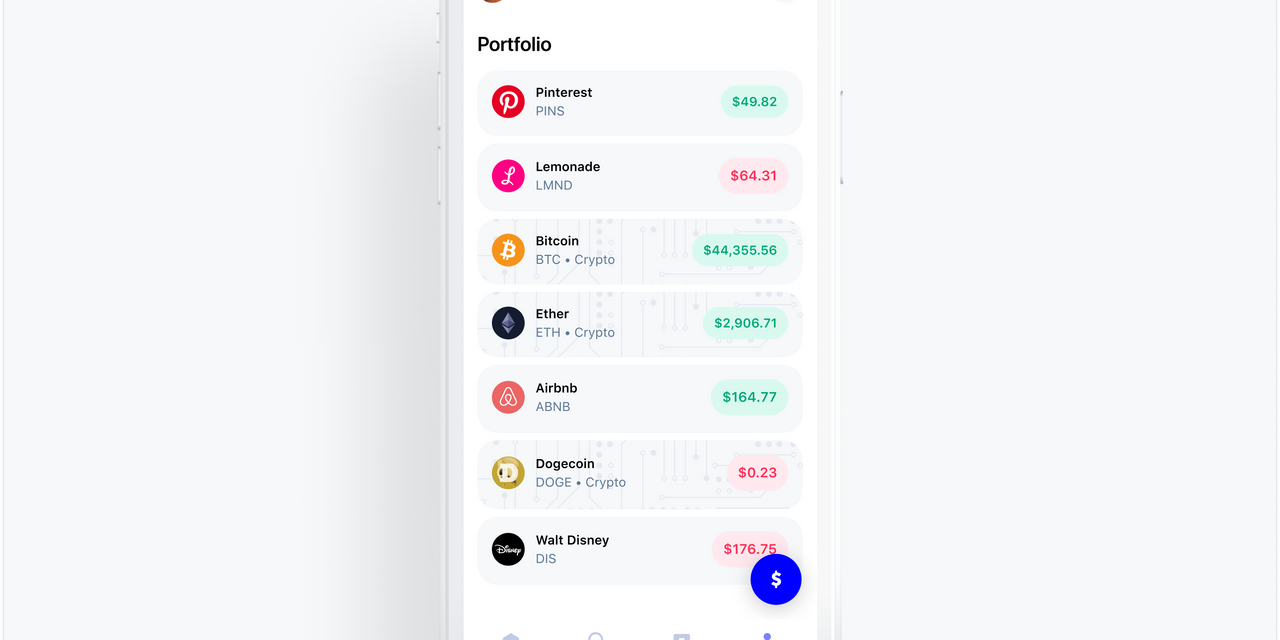 The investing platform operated by Public Holdings Inc. is rolling out cryptocurrency trading, joining rivals such as Robinhood Markets Inc. in the digital-currency space.

The move marks an expansion for Public.com, which launched in 2019. Previously, individual investors who used the platform could trade only U.S.-listed stocks and exchange-traded funds. Unlike competitors including Robinhood, the company doesn’t allow options or margin trading, two strategies considered more risky for investors.

Starting Thursday, Public.com will begin gradually launching the offering to most users, who will be able to buy, sell and hold 10 cryptocurrencies, including bitcoin, ether, joke cryptocurrency dogecoin and Cardano’s ada token. New York residents are currently ineligible to trade the digital assets, the company said, because its servicing partner doesn’t have the required license in the state yet.

Public.com’s offering comes as individual investors are flocking to cryptocurrencies, enticed by the potential for big investing gains. On Wednesday, bitcoin jumped to $54,903.22 as of 5 p.m. ET, marking a more than 14% jump over four days. Altcoins, or alternatives to bitcoin, have also surged this year, with dogecoin’s year-to-date return nearly reaching 4,900%.

Cryptocurrencies have “really attracted a new generation of investors to it as an asset class,” Stephen Sikes, chief operating officer of Public.com, said. “We also think…there is some validity to including crypto within a broadly diversified portfolio.”

In the increasingly crowded retail-investing space, Public.com is a smaller competitor to giants such as Robinhood or Fidelity Investments Inc. The company says it has more than 1 million members, of which 90% are first-time investors. In February, the company announced a fund raise that pushed its valuation to $1.2 billion. Celebrities including actor Will Smith, through Dreamers VC, the venture capital fund he co-founded, have backed the company.

Public.com’s trading platform includes social features that allow users to follow other investors and share ideas. The company has also made several decisions to help safeguard investors. In addition to restricting options and margin trading, Public.com has stepped in during volatile periods. It temporarily restricted users from buying shares of Hertz Global Holdings Inc. in 2020 as the car-rental company’s stock price dramatically swung. During the meme-stock rally earlier this year, it added safety labels, which warn users of the possibility of financial loss, to stocks such as GameStop Corp. —something they have done for other more volatile investments.

The company also ended its participation in the widespread but controversial practice of payment for order flow, in which brokerages route customer orders to high-speed trading firms in return for payments. Supporters of the practice say it enables free trading and allows individual investors to get better prices for their trades. Critics say it incentivizes brokers to encourage frequent trading to maximize revenues.

In ending payment for order flow earlier this year, Public.com instead introduced a model that would allow users the option of tipping the company.

Write to Caitlin McCabe at caitlin.mccabe@wsj.com

HONG KONG—Chinese regulators have quietly reopened an onshore funding spigot for the country’s property developers, enabling some firms to tap…

WASHINGTON—Cryptocurrency exchanges will soon have to report the digital tokens they hold for customers on their balance sheets, according to…