There has been a number of recent insider buys at Intel (

Insider buying is often seen as a positive sign for stocks, since these executives have intimate knowledge of the company and may know information that the rest of the market doesn’t. Open market buys from insiders could be a sign that insiders are bullish on their own company’s prospects. As legendary investor Peter Lynch once said: “Insiders might sell their shares for any number of reasons, but they buy them for only one: they think the price will rise.” And those insiders know more about their business, its recent operational trends and its long-term prospects than anyone else in the world.

The below chart details the recent insider buys for Intel:

Intel is one of the largest semiconductor companies in the world. While it is facing competitive pressures from the likes of Advanced Micro Devices (

AMD, Financial) in CPUs, Taiwan Semiconductor (TSM, Financial) in foundry and Nvidia (NVDA, Financial) in specialized chips, it remains a dominant supplier in a secular growth market. Intel continues to spend heavily on R&D, and this trend should continue.

Apart from CPUs, Intel has made a number of astute major investments to build its Artificial Intelligence and automotive offerings, including Altera, Mobileye, Habana Labs and Movidius. The data center group has benefited from the proliferation of mobile devices, which need to tap into a server to function. Server processor and edge computing sales are expected to be the main drivers of growth in the near future.

Intel is also making a renewed push into the chip foundry market. In the past, it ditched its foundry operations in order to take advantage of cheap labor in poorer countries, but in the midst of the chip shortage and the realization of how important it is to have a domestic chip supplier, the company has found that becoming a foundry might be profitable again. To that end, Intel acquired Tower Semiconductor for $5.4 billion in February 2022.

Intel reports along six segments/. Below is a chart of recent earnings results for those six segments:

The following shows proportion of business by country. As we can see, China is the largest destination of Intel products. This is an area of risk to Intel if the relationship between the U.S. and China sours. 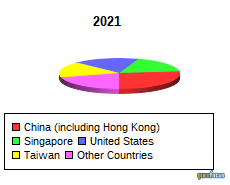 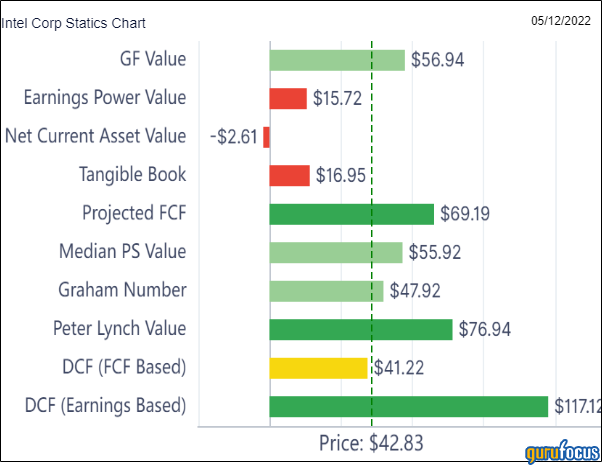 Intel’s GF Score is strong at 90, with strong metrics in all key attributes except for Momentum, which is understandable as we are in the midst of a tech meltdown. 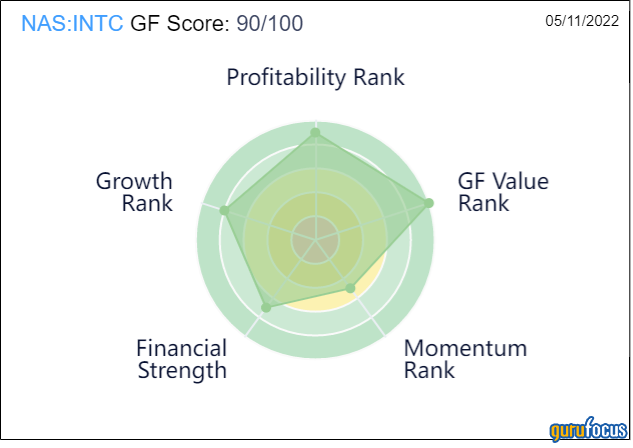 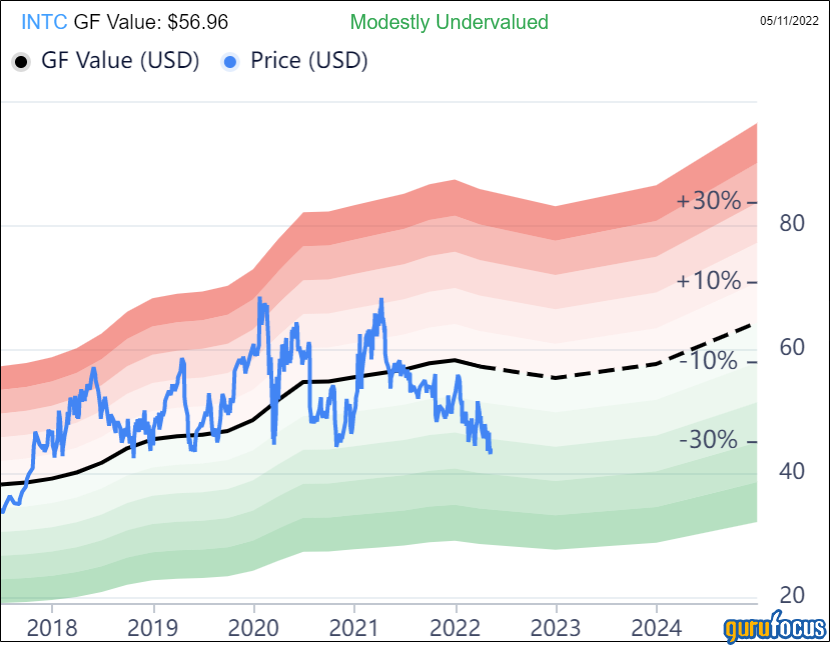 Morningstar analysts give Intel a 4-star rating with fair value estimate of $65 a share, while CFRA’s analyst rating is neutral with a 12-month target of $48 a share. At current prices, Intel pays a dividend yield of 3.24%.

The following gurus have large positions in Intel. Most have a value bent (like Primecap,

Another deep value Guru, Bruce Berkowitz (Trades, Portfolio), has been building a position in the company. The presence of these deep value mavens is further validation that the stock is undervalued, in my view.

Daniel Loeb (Trades, Portfolio) of hedge fund Third Point LLC had the following to say about Intel in his 2021 letter:

“2021 was a highly productive year for Intel’s new CEO, Pat Gelsinger. Despite the stock’s tepid results, we see a compelling, underappreciated fundamental story. Intel’s “brain drain” – a key part of our thesis when we first sought to help the company confront its long-time underperformance – appears to be reversing. Since joining Intel, Mr. Gelsinger has not only brought back prominent Intel former employees but has also attracted talents from competitors such as AMD, Nvidia, Apple, and, most recently, Micron’s stellar Chief Financial Officer, David Zinsner.

We are encouraged by Intel’s aggressive investment plan, including a recently announced fabrication plant in Ohio and acquisition of Tower Semiconductors. We knew from the start that Intel’s turnaround would be complex and lengthy, and we have been pleased to see Mr. Gelsinger sacrifice near -term earnings for long-term growth.

Finally, after a series of blunders across its PC and Server product lines, Intel is finally receiving good reviews for one of its upcoming processors: Alder Lake. Tom’s Hardware, a preeminent hardware publication, called Alder Lake “a cataclysmic shift in Intel’s battle against AMD’s potent Ryzen 5000 chips.” While this is just one product across a broad lineup, and given it will take time to achieve leadership across them all, we are encouraged by these tangible signs of progress under Mr. Gelsinger’s leadership. With talent returning, an improving product suite, and a willingness to invest for growth, we believe Intel’s prospects have turned the corner. We expect that the company’s upcoming analyst day will be an ideal time for Mr. Gelsinger to articulate the progress he has made and begin to reset expectations for the company.”

Loeb had exited Intel stock in the fourth quarter of 2021. From his favourable comments, I believe it is possible that he has plans to re-enter the stock, but this is just speculation; we won’t know for sure unless Intel shows up again in Third Point’s future regulatory filings.

Intel is entering a period of heavy investment in capex and acquisitions as it tries to close the manufacturing gap with Taiwan Semiconductor. This means that its free cash generation will go down in the next few years as it spends heavily. However, the U.S. government is extending a lot of support to this sector due to the desire to have local production of semiconductors and lessen dependence on foreign suppliers. Thus, Intel should benefit from political and policy support.

Demand for semiconductors in general is expected to remain strong as chips become pervasive throughout the economy in areas like automobiles, the internet of things, appliances, medical devices, toys and myriads of sensors. This pervasiveness is leading to the sector becoming less cyclical as demand is coming from many different areas. In addition, the huge capital expenditure and technical expertise required in establishing a foundry limits competitors and market tends to form an oligopoly.

The Undervalued Holdings of the Decade’s Top-Performing Gurus