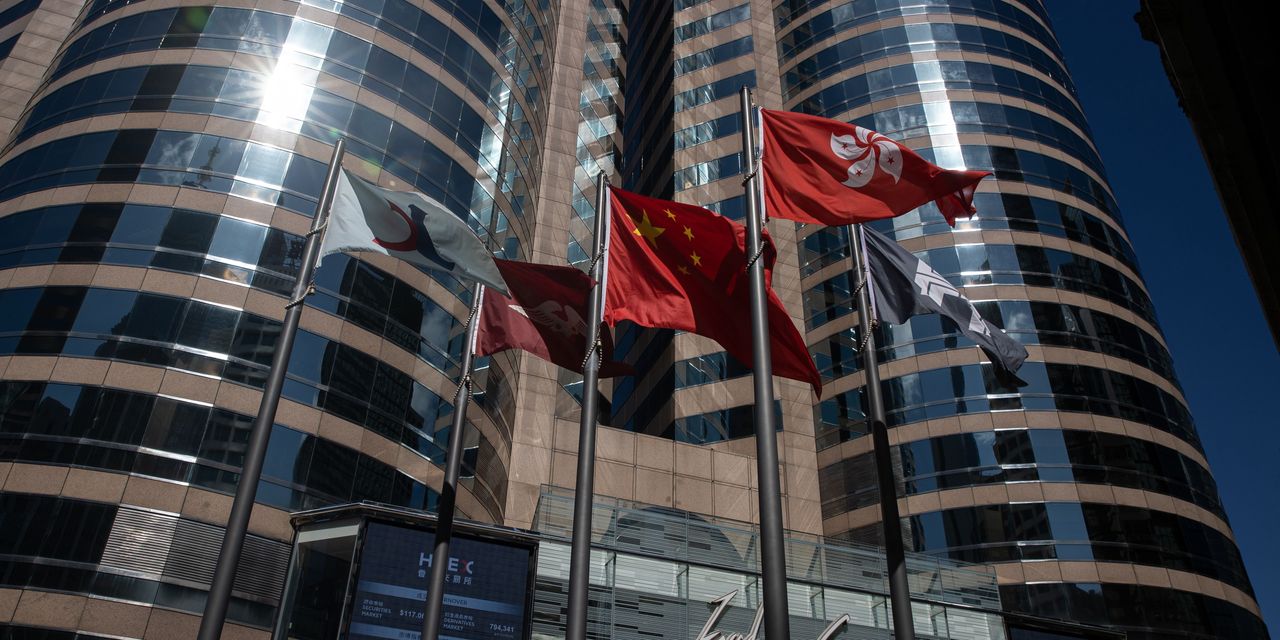 Shares of Chinese internet and technology companies jumped in Hong Kong on the last day of the year, following a surge in their corresponding American depositary receipts overnight.

The Hang Seng Tech Index, which tracks the 30 largest technology companies listed in the city, rose 3.6% on Friday in a holiday-shortened trading session. Chinese internet stocks led the growth with Alibaba Group Holding Ltd. , Baidu Inc. and Bilibili Inc. each logging gains of around 8%.

The rally in Hong Kong followed even larger gains in many U.S.-listed Chinese ADRs on Thursday in New York. The BNY Mellon China ADR index rose 8.9%, and the 200-plus Chinese companies listed on major U.S. exchanges added a total of $92 billion in market capitalization to $1.1 trillion, according to data from S&P Global Markets Intelligence. Even the shares of beaten-down Chinese education companies logged double-digit increases.

Shares of newly listed SenseTime Group Inc. jumped 33% Friday on their second day of trading in Hong Kong, boosting the Chinese artificial-intelligence company’s market valuation to the equivalent of $23.5 billion.

There wasn’t an obvious catalyst for the late-in-the-week surge, but market participants noted that many Chinese internet stocks have sold off sharply this year following a series of regulatory actions by Beijing. Many stocks remain deeply in the red for 2021, and investors could be looking for bargains. Industry heavyweight Alibaba, for instance, has declined by close to 50% this year and is trading at under 13 times its earnings for the next 12 months.

“We think the rally is mainly driven by improving sentiment and fund inflows as Chinese ADRs’ valuation is undemanding,” said Bruce Pang, head of macro strategy and research for China Renaissance Securities.

The broader Hang Seng Index closed 1.2% higher on Friday, taking its year-to-date decline to 14% and recording its worst yearly performance in a decade. The Hang Seng Tech Index ended 2021 down 33% for the year.

A combination of U.S. delisting concerns and Beijing’s regulatory crackdowns on Chinese companies in many sectors has weighed on the Hong Kong stock market, whose performance has become heavily dependent on companies from China.

In contrast, Chinese firms listed domestically on the A-share market have collectively risen this year. The broad Shanghai Composite Index and Shenzhen Component Index were up about 4.6% and 2.3%, respectively, for 2021 as of midday Friday, according to Wind data. Both indexes rose slightly after China’s manufacturing and service sectors showed unexpected signs of recovery to close out the year, according to official data releases.

Write to Rebecca Feng at rebecca.feng@wsj.com

Do you care if a clerk at the drugstore gives you change in one $10 bill or two $5 bills?…

OPEC is forecasting an unlikely winner amid an energy shift away from hydrocarbons, predicting the cartel itself will dramatically boost…