ATRS, Financial) for about $960 million, San Diego-based Halozyme Therapeutics Inc. (HALO, Financial) may not be done beefing up its portfolio.

Speaking on a conference call, CEO Helen Torley said the company is open to adding assets “over time” if they fit with its existing business in endocrinology and urology.

Since the purchase was announced last week, Atares shares have jumped about 50% to $5.57, a price at which it appears to be fully valued given downgrades by five brokerage companies that cited the unlikelihood of competitive bids.

Halozyme’s mainstay is it under-the-skin delivery system, which is used by some of the biggest names in the pharmaceutical industry, including Johnson & Johnson (

The company hopes to combine its Enhanze technology with Antares’ to develop a rapid subcutaneous drug delivery that can be used to administer larger volumes of drugs that currently have to be given intravenously. 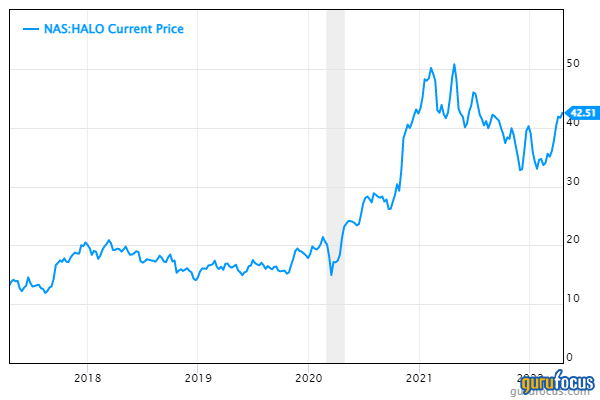 The acquisition of Atares signifies Halozyme is going back to the future. Prior to 2019, the company had a drug development progam, but got out of that business when its late-stage cancer drug failed in clinical trials. Now, with Antares, Halozyme obtains three commercial drugs, an equal number of internal development programs and a sales force of 122.

Since 2019, the biotech has been funded on partner revenues and sales-related royalties.

The company had fourth-quarter 2021 adjusted earnings of 42 cents per share, which beat the Zacks consensus estimate of 40 cents. Revenue declined more than 16% year over year to $102 million, mainly because of declines from collaboration agreements and product sales, which were partially offset by strong royalty payments, especially from Johnson & Johnson.

In light of consumer prices continuing their record surge in March, five consumer defensive stocks with high GF Scores are…

According to current portfolio statistics, a Premium feature of gurus, four stocks in Seth Klarman (Trades, Portfolio)’s equity portfolio that…