GSK, Financial) is shoring up its defenses as the giant British pharmaceutical company girds for a potential battle with a well-known activist investor. Fierce Pharma reported embattled CEO Emma Walmsley has enlisted the support of three large institutional investors in the company’s proxy fight against Elliott Management.

As I reported on April 21, Elliott, the New York-based hedge fund, is renowned for pushing for change at what it believes are underperforming companies, particularly those in the drug industry. And Elliott often gets what it wants.

The fund was instrumental in Alexion’s acquisition by AstraZeneca (

AZN, Financial) in a $40 billion takeover. It also wanted Bayer AG (XTER:BAYN) to divide its crop science and pharma business. Bayer rejected that request, but did take steps to cut costs by nearly $2 billion by 2024. Others who made major overhauls after being targeted by Elliott include yogurt maker Danone (XPAR:BN, Financial), SABMiller and hospitality companu Whitbread (LSE:WTB, Financial).

Glaxo is splitting into two companies, with the action scheduled to be completed next year. After the spinoff, the company’s consumer business will become a separate company. This will enable Glaxo to concentrate on the more profitable pharmaceutical and vaccine businesses.

Some have suggested that Elliott wants to speed up the division, but it doesn’t appear it can be done any faster. Meanwhile, Fierce Pharma said several “well-placed bankers and investors” think Elliott might even want to split the drug and vaccine businesses, shake up the management team or even seek a sale of the company. 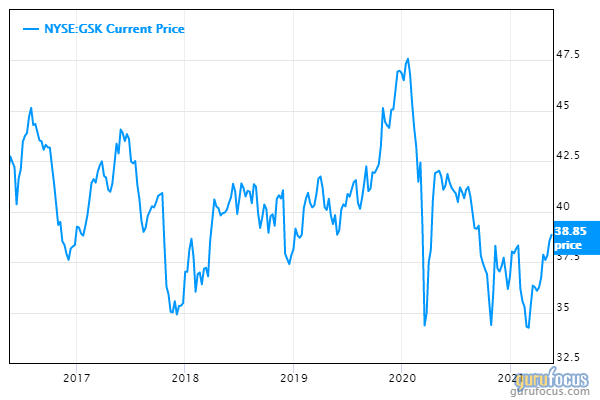 GlaxoSmithKline CEO Emma Walmsley has been in her current role since 2017, overseeing a nearly 14% drop in the value of the company’s shares.

One top shareholder doesn’t think the British government would sit by while Elliott tries to force the company into a sale or even a breakup. He showed disdain for Elliott, claiming the hedge fund’s goal is to make a fast buck. “That’s its modus operandi. It’s in it for shareholder returns as fast as it can get” said the investor, who added that accelerating the split into two companies will only result in members of key management jumping ship.

Samuel Johar, chairman of executive search firm Buchanan Harvey, thinks something radical needs to be done to reverse GlaxoSmithKline’s fortune. He said the emergence of Elliott isn’t surprising given the company has been poorly managed for 15 years.

If tje stock price is the key measure of management’s abilities, Johar certainly has a point. In the past five years, Glaxo shares are down about 14%.

In a bit of a surprise, Elliott was quiet at Glaxo’s annual shareholder meeting on May 5, when all 22 resolutions were overwhelmingly approved, including the compensation plan for the executive team and the re-election of Walmsley and Symonds.

Walmsley acknowledges the poor performance of Glaxo’s stock, but insists moves made during her watch will eventually push shareholder value into the plus column. “With the foundation of deep change in progress made in the last few years, we believe we’ve developed a compelling vision and outlook to share with you,” she said.

Disclosure: The author has no position in any of the stocks mentioned in this article.

Daniel Loeb Hooks Up With SentinelOne and SoFi in 2nd Quarter

Daniel Loeb (Trades, Portfolio), leader of Third Point, disclosed this week that his firm’s top five trades during the second…

GMO Commentary- Japan Value: An Island of Potential in a Sea of Expensive Assets