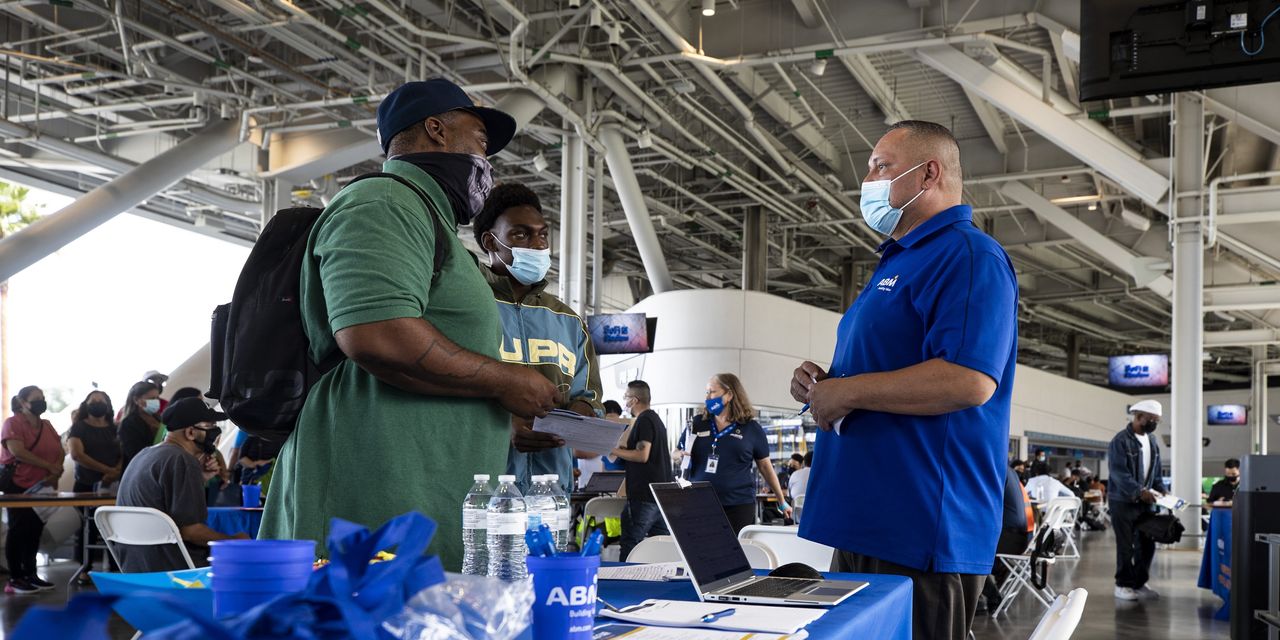 U.S. job growth fell to the slowest pace of the year in September, as the Delta variant and a persistent shortage of workers restrained the ability of companies to hire.

The economy added 194,000 jobs in September, the smallest gain since December 2020 and down from the upwardly revised 366,000 jobs added in August, the Labor Department said Friday. The jobless rate fell to 4.8% from 5.2% a month earlier. The rate fell largely because many workers exited the labor force.

The figures add to evidence that fears about the virus and global supply constraints continue to hold back the economic recovery. The biggest factor behind last month’s weak payroll gain was a decline in public-sector jobs, mainly at schools. Employment in private-sector industries rose by 317,000 in September, with modest gains across several industries.

The spread this summer of the Delta variant, a particularly contagious strain of Covid-19, likely spooked would-be job seekers and impeded speedier job growth in September, despite many companies being desperate to hire, economists and business leaders say.

“Ramped up production may be necessary, but you can’t find the employees to ramp it up,” said Ann Silver, head of the local Chamber of Commerce in Reno, Nev. “We’re hearing that from every sector—hospitality and touring, healthcare, you name it. People can’t be found. Everybody’s quick to say, ‘Wow, the economy is rebounding.’ Well, it can’t without human beings.”

Employers appear eager to hire across the country. There were nearly 11 million unfilled jobs at the end of July, the highest on record and exceeding the number of unemployed workers seeking jobs, Labor Department figures show. The U.S. had roughly five million fewer jobs in August compared with February 2020.

Employers are increasingly holding on to the workers they do have, with layoffs across the U.S. declining. Applications for initial jobless claims fell by 38,000 last week to 326,000, close to a pandemic low, the Labor Department said Thursday.

The jobless rate remains higher than the pre-pandemic level of 3.5%. But other measures—chiefly, wage growth—suggest the labor market is tight. The average hourly pay of private-sector workers climbed 4.6% in September compared with a year earlier, Labor Department data show, as employers raised wages to compete over a shrunken pool of workers.

At Great Basin Brewing Co.’s two restaurants in the Reno, Nev., area, managers have raised the wages of cooks by 30% since January, said co-founder Tom Young, who recently sold the company to private investors. Diners have returned to the restaurants in droves this year, but instead of seating the normal 180 patrons in each store they will only seat a maximum 150 due to the lack of kitchen staff, Mr. Young said. The company seeks to hire 10 people. “There aren’t enough workers to go around here,” Mr. Young said.

The labor-force participation rate—or the share of workers with a job or actively looking for one—was little changed at 61.6% in September, down from 63.3% in February 2020 ahead of the pandemic.

The number one reason why people are avoiding the workforce is fear of catching the coronavirus, according to an August survey by the job-search website Indeed. Other factors include parents staying at home to care for children while some schools remained closed this year.

Economists point to at least two reasons for why they think job growth picked up last month. One is that many school districts reopened and likely hired workers such as cafeteria workers and bus drivers. The reopening also may have enabled parents, particularly mothers, to return to work. With Covid-19 cases declining recently and vaccinate rates rising, more workers could return to the labor force, economists say.

“If previous declines in case counts are any guide, the reduced salience of the pandemic will lead to more folks returning to the labor force,” said Nick Bunker, economist at Indeed.

Write to Josh Mitchell at joshua.mitchell@wsj.com

McDonald’s Corp. Chief Executive Chris Kempczinski is apologizing for a text about the shooting deaths of two Chicago children. Mr.…