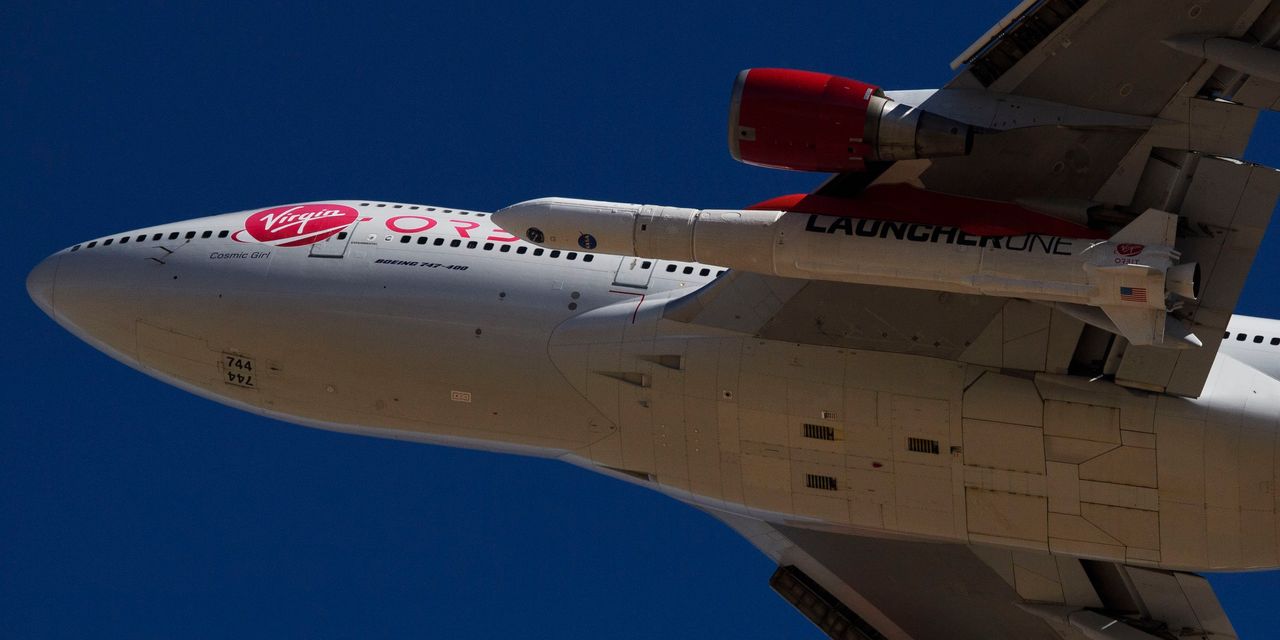 For speculative aerospace startups, taking off gets harder when market winds suddenly turn against you.

Last year consolidated special-purpose acquisition companies, or SPACs, as the preferred way to list firms that make no money but promise cosmic returns. Aerospace has fully embraced them, starting with British billionaire Richard Branson’s space-tourism venture, Virgin Galactic, in 2019 and then through a raft of small-satellite launchers—such as Rocket Lab and Astra Space —and makers of electric vertical-takeoff-and-landing vehicles, or eVTOL—like Joby Aviation, Archer Aviation, Vertical Aerospace and Lilium Air Mobility.

On Friday, Mr. Branson virtually attended the opening bell for the Nasdaq debut of his other space venture, Virgin Orbit, which was rung by Chief Executive Dan Hart. The shares closed up a whopping 24%, but are still down 12% since its SPAC merger was completed on Dec. 30.

Indeed, almost all recently SPAC-ed aerospace startups have taken a beating over the past three months, with shares in Virgin Galactic down 46% and those in Archer and Joby losing 43% and 31%, respectively.

More broadly, the market value of these futuristic moonshots has ebbed and flowed in lockstep with cryptocurrencies and “meme stocks,” launching them toward the moon in the first half of 2021 and later deflating them. As the year came to a close, investors became more discerning: They bought the shares of SPACs that had fallen close to or below their trust values, which almost ensures a return, while retaining a skeptical view of ex-SPAC ventures.

It should be a warning for upcoming aerospace startups with galactic valuations. The latest is Eve, the eVTOL subsidiary of Brazilian plane maker Embraer, which two weeks ago announced a SPAC deal that would give it a valuation of $2.9 billion—Embraer’s own market capitalization is only $3.1 billion. To be sure, Eve already has $5 billion in preorders, but it will be fighting with myriad competitors for a market that is closer to science fiction than to the $1 trillion potential size dreamed of by some analysts.

By contrast, small-satellite launchers are already a promising entry point into the burgeoning space economy. Rocket Lab remains richly valued but has taken the lead among them and stands out as the rare ex-SPAC with more conservative official projections than those of its analysts. On the other end of the spectrum, Virgin Orbit’s valuation is now the cheapest among high-profile aerospace startups relative to expected 2026 earnings and has likely fallen below that of Astra, which struggled with many failed launches last year.

Despite Friday’s rally, Virgin Orbit still looks unfairly maligned compared with its sibling Virgin Galactic, which isn’t expected by Wall Street to generate any operating income in the next five years: It is seen coming close to break-even next year and making a sizable profit in 2024. It has already delivered 19 satellites into orbit, and its clever use of a Boeing 747 jet as a mobile rocket platform provides any government with geopolitical concerns the ability to deploy satellites from its own airspace.

However, despite expecting to raise $383 million from its SPAC backers in August, it only managed to hold on to $68 million. Together with some extra funds by Mr. Branson and already committed private placements by big corporations like Boeing, the final gross proceeds added up to $228 million—barely above the minimum cash requirements of the merger agreement.

The fact that ex-SPAC aerospace stocks indiscriminately trade in tandem can provide daring investors with opportunities. But it is also a reminder of the big role that fickle sentiment will play in the fate of these speculative enterprises.

The Fed Is on the March. Can Your Bond Fund Keep Up?

If, as nearly everyone seems to believe, the Federal Reserve raises interest rates aggressively this year to try snuffing out…

U.S. stock futures paused, a day after a selloff among some of America’s biggest technology firms dragged down broader indexes.…