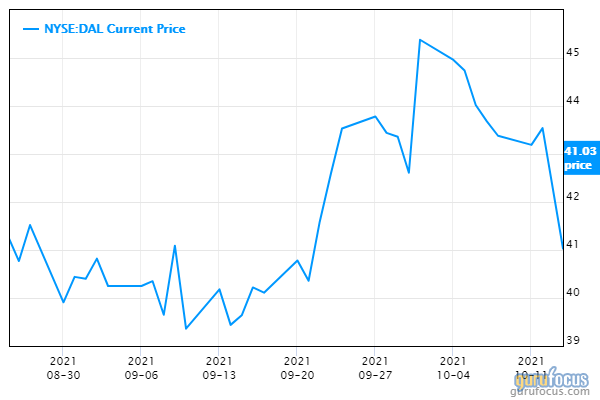 The drop came despite Delta reporting higher-than-expected top and bottom lines for the third quarter. In fact, if we disregard the bottom-line boosts from federal aid, the airline even managed to report its first quarterly profit since the start of the Covid-19 crisis.

However, investors turned sour on the stock as the company anticipates more bad news to come in the fourth quarter.

“At present time, we’re expecting a modest loss in the fourth quarter,” said CEO Ed Bastian on Wednesday’s quarterly earnings call. That’s not what investors wanted to hear after the company just reported long-awaited adjusted earnings per share of 30 cents for the third quarter.

Airline stocks were a popular “pandemic buy” in March of 2020 as the market banked on a quick recovery for the sector, with some even being so optimistic as to predict that as soon as travel restrictions lifted, airline profits would return to 2019 levels. However, that has not been the case.

Part of the reason why airline profits remain pressured is due to continued lower travel rates, but other, equally important headwinds include high debt, inflation, labor shortages and fuel costs.

Delta says that before fuel cost expenses, it expects costs to rise between 6% and 8% in the fourth quarter. It expects fuel prices to rise to the $2.25 to $2.40 per gallon range, up from the average $1.97 per gallon in the third quarter. At the midpoint, this would represent a 35.5% rise in fuel costs. In the three months ended Sept. 30, fuel costs accounted for $1.5 billion of the $6.9 billion in operating expenses.

Cloudy skies on the valuation front

The majority of U.S. stocks have benefited from a strong bull run over the past couple of years. In the 2020 market crash, almost any stock you picked was bound to go up. The airlines seemed to be a natural pick, since investors were expecting them to quickly return to their former profitability. This has actually made the airlines a great pandemic buy so far; after all, as long as other people are willing to pay more for your shares than what you paid for them, you can make money in the stock market.

However, now that Delta’s shares are priced nearly as high as they were prior to Covid-19, it’s easy to see why investors would get cold feet due to a disappointing outlook. According to the GuruFocus Value chart, Delta is significantly overvalued at current levels, and the intrinsic value of the stock is not expected to catch up with its current price until at least the end of 2022. 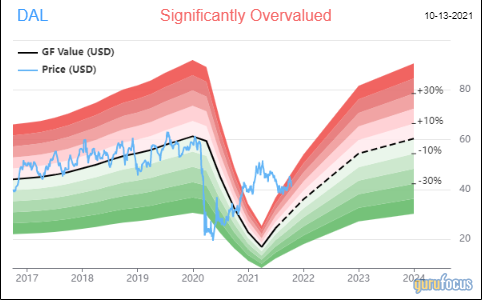 Thus, while Delta may have been a good pandemic buy in 2020, the stock seems too richly valued to consider buying at the moment, especially when we consider that further disappointing results are expected to come.

The stock of Altisource Asset Management (AMEX:AAMC, 30-year Financials) is estimated to be significantly overvalued, according to GuruFocus Value calculation.…