The FDA decision on Biogen Inc.’s (BIIB) Alzheimer’s treatment aducanumab is scheduled to come in the next few days. In an Activist Insight Vulnerability study, Insightia placed the company near the top of the list of drug firms most likely to come under investor pressure in the next several months. Compared to its peers, Biogen’s stock has underperformed, the firm says.

A thumbs down on the treatment could not only send the company’s shares into a tailspin but reverberate throughout the pharmaceutical industry. The agency’s denial of aducanumab could not only trigger a proxy fight at Massachusetts-based Biogen but lead to a flurry of acquisitions or mergers, reported Fierce Pharma.

Things could get much worse if aducanumab is nixed. Analyst Iuri Struta said Biogen’s future is riding on the back of the drug given it has taken practically no steps to prepare for the eventual loss of patent protection for its three main key multiple sclerosis medications – Tysabri, Tecfidera and Vumerity. “Uncertainty over what will be the company’s next revenue driver has dented investor confidence,” wrote Struta.

Among members of Big Pharma, Biogen in the 93rd percentile of companies most vulnerable to activist investor pressure over the next nine months, according to the vulnerability study. 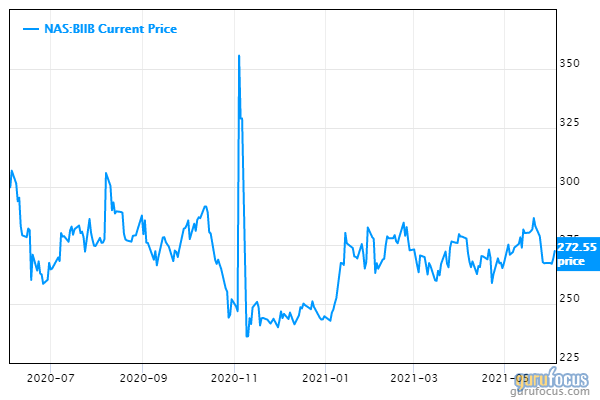 Aducanumab has a checkered past and it doesn’t appear to be the breakthrough treatment so desperately needed by physicians and patients. The drug got new life after it was labeled all but dead in October 2019, when Biogen and its partner Easai Co.Ltd. (TSE:4523) said they were stopping phase 3 testing because the drug simply wasn’t working. Shortly thereafter, Biogen changed its mind and said that since additional data showed aducanumab was effective against Alzheimer’s. That lead to the company asking the FDA for expedited review when it filed for approval.

The reasons investors have soured on Biogen’s shares are many. At $41 billion, the company’s market cap is trading at only 11 times its profits and 7.7 times its Ebitda, noted Fierce Pharma. By comparison, the numbers for Biogen’s peers are 22.2 and 15.8 on average, respectively.

Meanwhile, sales figures show a company in free fall. For the first time in decades, Biogen’s annual revenue declined in 2020 and did so in a huge way, dropping from $14.4 billion in 2019 to $13.4 billion last year. The trend accelerated in the first quarter of this year.

According to Struta, aducanumab is the “only real hope of avoiding a plunge over the patent cliff.” Biogen needs to find a way to generate sales until its early-stage treatments start to hit the market in 2024. If aducanumab isn’t approved or is given limited access, an activist investor could point the finger at the management team’s execution and strategy and push for a change.

It wouldn’t be the first time Biogen came under investor pressure. More than 10 years ago, billionaire investor

Carl Icahn (Trades, Portfolio) forced changes at the company before ending a proxy fight in a settlement.

Some have speculated that given its issues, Biogen could go the acquisition route again. CEO Michael Vounatsos has made one deal since he took the company’s reigns in 2017, paying $800 million for Nightstar Therapeutics, but that company’s products have done little to address Biogen’s immediate needs.

Insightia thinks the company might be better off selling itself or merging with a competitor, pointing to other megadeals that have been consummated in the past few years.

As decision day nears, one analyst suggests investors buckle their seat belts in anticipation of big moves in Biogen stock, as well as gyrations in the shares of other companies that have Alzheimer’s treatments or may be takeover targets for Biogen, such as Esai, the company’s partner on aducanumab.

“The FDA’s upcoming decision on aducanumab is not only binary for Biogen but also likely to reverberate throughout the biopharma sector, influencing overall sentiment on the space, perceptions on regulatory flexibility and business development dynamics,” Brian Abrahams of RBC Capital Markets wrote. “With sector sentiment negative, the adu decision has potential to rapidly turn perceptions around or conversely, to double down on recent apathy.”

Disclosure; The author has no position in any of the companies mentioned in this article