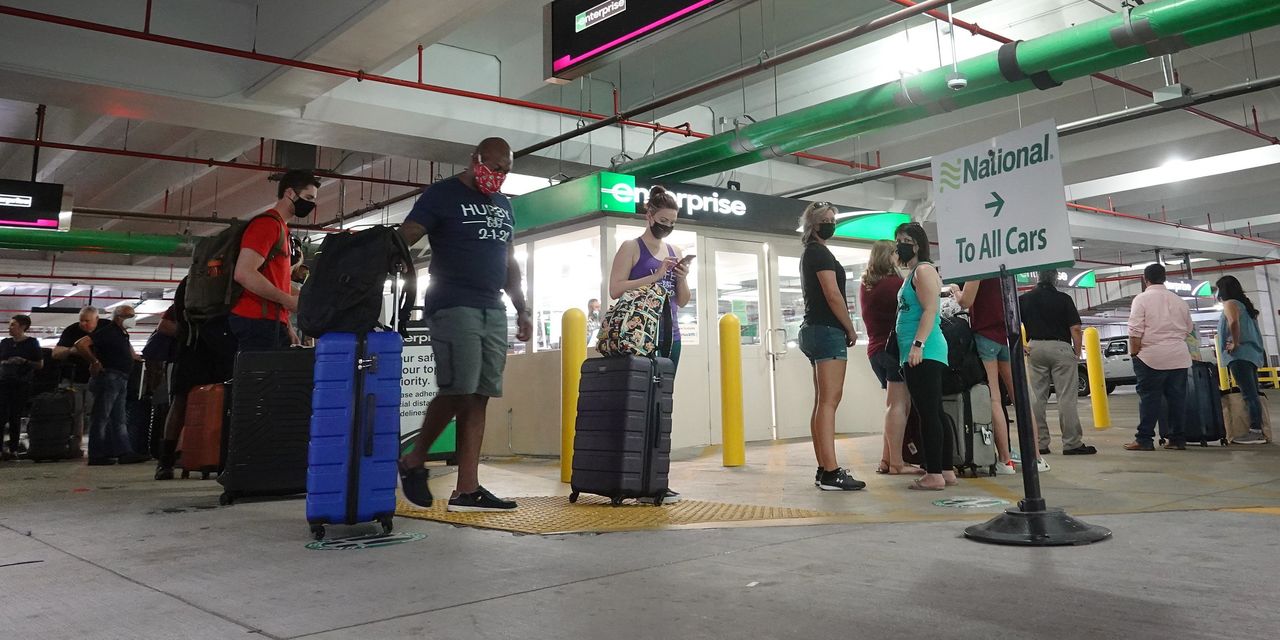 There was an old lady who lived in a shoe. She’ll be cashing in this summer on Airbnb. ABNB -1.18%

The U.S. economy’s recovery from Covid-19 is causing sticker shock for many goods and services, and some companies are facing resistance from consumers.

For example, despite the fact that Uber Technologies UBER 0.40% has said it doesn’t have nearly enough drivers to meet growing rider demand, it also believes customers aren’t willing to pay more than the usual fare for a ride. It and other ride-share companies are now scrambling to bait back drivers to their platforms to boost supply and offer more reasonable pricing to riders that could lead back to business as usual.

Supply declines in other sectors also could hinder the overall recovery. Last year, rental-car companies unloaded vehicles to cut costs as demand cratered. Now, they are seeing a sudden recovery amid auto shortages. Experts say it could be well into next year before inventory catches up. A Wall Street Journal report described loyal customers complaining about “unacceptable” wait times recently and rates that are frequently multiples of what they were pre-pandemic. Auto dealers are facing similar constraints. AutoNation AN 1.00% said last week that its inventory is down more than 38% versus a year ago and that the supply and demand imbalance isn’t likely to improve this year.

Also consider the home-sharing economy. A Skift analysis published earlier this month showed Airbnb lost hosts throughout the pandemic—particularly those listing just one property. The analysis notes that single property owners represent more than 70% of Airbnb’s total host population. The company is now enticing hosts by showing them just how much they can bank this summer, even on a yurt, a tiny house or a barn. Airbnb Chief Executive Brian Chesky said earlier this month in a CNBC interview that his company is seeing increased strength of its host community, but also that it probably will have a “high class problem” with more guests than his platform has hosts for. High class problems are still problems, though, especially when the pandemic has driven increased awareness for home-share competitors such as Expedia’s EXPE 0.30% Vrbo.

Airline pilot shortages are a problem that existed even before the pandemic. It was temporarily alleviated by the decline in demand over the past year. But as people start to want to fly again, the underlying issue hasn’t been solved, according to a March report from management consulting firm Oliver Wyman. Investments in cadet training programs have been trimmed, and some airlines encouraged pilots to retire early last year to reduce costs.

New pilot candidates might reconsider entering a cyclical industry, opting instead for a more stable job, the report suggests. It concludes that the industry could see pilot shortages by late this year, perhaps reaching tens of thousands fewer pilots than demand necessitates by 2025. Price limitations and demand are already such that middle seats are increasingly being booked across airlines, despite the fact that recent research suggests Covid-19 exposure is meaningfully reduced when they are kept empty.

Investors are expecting these companies to capitalize with no downside. Uber and Lyft LYFT 1.13% are trading above last year’s highs. Avis Budget Group CAR 2.71% is now trading at 10-year highs and AutoNation’s shares have more than tripled relative to a year earlier. Airbnb is trading up more than 150% from its offering price less than five months ago, and shares of major airlines stocks have more than doubled from last year’s lows.

Rebounding demand is a great thing for the U.S. economy overall, but investors betting on individual sectors should consider all the work left to do to complete the recovery equation.

What You Need to Know About Investing

Write to Laura Forman at laura.forman@wsj.com

The Mass Distribution of Covid-19 Vaccines Is Under Way. ‘Everything Has to Come Together.’

Yellen Passed the Economic Stability Baton to Powell. Now, He’s Handing It Back.

When Jerome Powell succeeded Janet Yellen as Federal Reserve chief three years ago, he hosted a farewell dinner party for…