That same Monday, the ARK Next Generation (

Wood’s buy is the latest in a broad-based guru buying spree of the automaker as it ramps up its production of electric vehicles and seeks approval from the National Highway Traffic Safety Administration to start up a driverless EV service.

Let’s take a look at recent guru buys of GM and the reasons why this automaker is drawing the attention of top investing firms.

Aside from Wood, other gurus that have been buying shares of GM recently include Donald Smith & Co,

One thing that stands out is these gurus all have very different investing strategies, so it appears that GM appeals to investors based on a variety of different criteria. While Wood is known for disruptive growth investing, Jones is a famous value investor and Soros touts the “theory of reflexivity,” which holds that investor biases are the main factor that affects the stock market.

The top guru shareholder of the stock is

At the 5% mark, Buffett would have to report any changes to his holding in the company to the SEC within a couple of weeks via a Form 4 filing, which is one potential reason for the reductions, though we have no way of knowing Buffett’s reasoning unless he explicitly states it.

The Oakmark Fund, which owns 0.35% of GM’s shares outstanding, provided some commentary on the company in its first-quarter 2022 letter to shareholders following the year-to-date decline of its share price:

“General Motors (U.S.) was a detractor during the quarter, due to increased macro uncertainty, higher fuel prices, and concerns over rising input costs, which pressured the company in particular and the auto industry as a whole. While we are closely monitoring the potential impact of these dynamics, industry demand remains robust, driven by strong consumer balance sheets and pent-up demand after multiple years of constrained production. We also remain confident in GM’s ability to navigate a complex operating environment, which the company has consistently demonstrated over the past few years. Finally, the long-term picture remains bright. We believe GM is significantly undervalued, is well-positioned for the long-term transition to electric vehicles and has numerous needle-moving ancillary business opportunities (most notably Cruise, which is an industry leader in autonomous vehicle technology) that are underappreciated.”

For years, GM has lagged far behind Tesla in the U.S. EV market due to two main reasons: hesitance to dedicate significant resources to its own EVs and the fact that EVs are more popular among the wealthier part of society that Tesla targets.

Now that climate change is becoming a very visible threat to the world, government policies have become more accommodative to EVs, which is giving the popularity of this technology a boost. Moreover, Tesla has now proven on scale that EVs can be profitable, encouraging other automakers to follow in its footsteps.

Given the market’s shift in favor of EVs, GM and many other automakers are realizing their long-term growth potential will likely be tied to EVs rather than traditional gas-powered vehicles.

GM thus plans to pursue ambitious revenue growth with EVs, robotaxis and several tech ventures. It also wants investors to see it as a tech startup rather than just an automaker. The company plans to spend $35 billion to develop 30 EV models globally by 2025 – an ambitious project by any measure.

Since the battery is the most expensive part of an EV, this could catapult GM to a leadership position among lower-cost EVs in the U.S., though the competition among low-cost EVs in China and Europe is a lot fiercer, so the company might have more trouble in those areas. GM already has several joint ventures in China, and it plans to re-enter the European market as an all-electric player.

Another thing to keep an eye on is supply chain issues. In order to achieve high growth, GM needs enough materials such as semiconductors and lithium to ramp up production. In a rapidly booming industry like this, it can be difficult to secure raw materials, so supply chain strength often has more of an impact that investors realize.

Catherine Wood (Trades, Portfolio) just so happens to be buying shares of GM after a price downswing, though given Ark Invest’s strategy, this could be due purely to coincidence. The firm’s strategy remains fully dedicated to growth rather than value. However, it is likely that some of the other gurus that have been buying recently, such as
Ken Fisher (Trades, Portfolio), are taking advantage of the stock being down 34% year to date.

As of May 10, shares of GM traded around $38.70 for a market cap of $56.43 billion and a price-earnings ratio of 6.46. It’s clear that investors aren’t assigning the company a growth stock multiple just yet. The GF Value chart rates the stock as fairly valued: 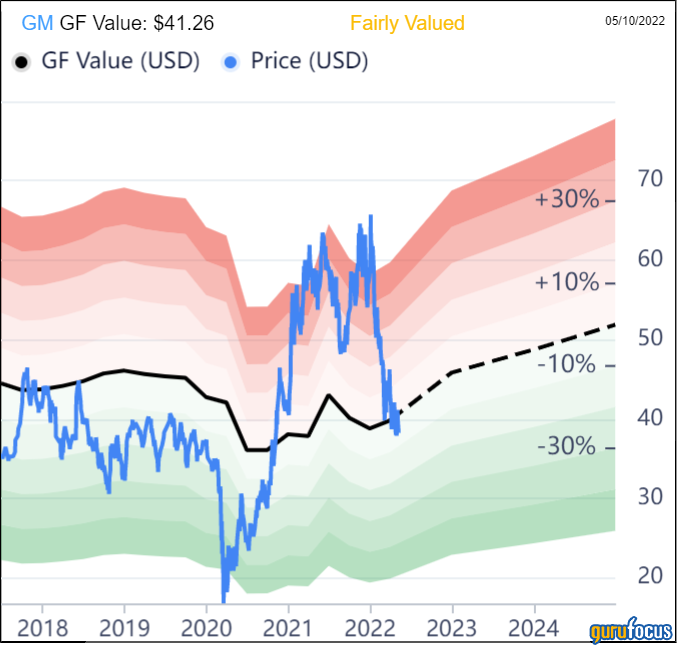 Even if we assume an extremely conservative discount rate of 15% due to high inflation, the discounted cash flow calculator estimates that GM would only need to grow 5% per year for the next decade in order to be worth its current price. 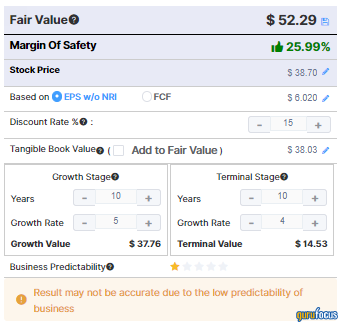 We do need to take the cyclical nature and low predictability of the automotive industry into account, though, as well as the fact that an inflationary environment naturally discounts future growth. In other words, despite the valuation appearing to be low, it could be a while before the market recognizes this.

The fact gurus with a diverse range of investing philosophies own shares of GM, including the likes of Buffett, Soros and Jones, is an encouraging sign. GM appears to be gearing up to offer a range of mid-price, mid-quality EVs to the world, which could go a long way toward speeding up an all-electric future. If it can meet its EV goals, investors will likely respond positively, though a true value crystallization event may not occur for several years due to supply chain issues, high inflation and general unfavorable economic conditions.

PayPal: On Its Way Back to Value Territory

The day after reporting a disappointing outlook for next year, online payments processor PayPal Holdings Inc. ( PYPL, Financial) has…

When screening the market for stocks that are trading at or below their fair prices, one tool investors can use…