While the terms of the agreement were not disclosed, the deal marks the Austin, Texas-based company’s first-ever acquisition.

Bumble said Fruitz, which was founded in 2017, is particularly popular among Gen Z consumers (the demographic of people born between 1995 and 2015). While the company declined to comment on the service’s specific number of users, it noted it has become one of the fastest-growing dating apps in Europe, having seen “rapid growth across France, Belgium, Netherlands, Switzerland, Spain and Canada.”

Adding to its appeal is the company’s “freemium” model, where the app itself is free but users are able to make in-app purchases to improve the experience.

Like Bumble, which was the first dating app to give female users the power in initiating a potential relationship, the service was created from the founders’ desire to solve what they felt were important problems for themselves and their communities.

In a statement, Fruitz co-founder and CEO Julian Kabab emphasized Bumble’s “vision and product” served as an inspiration for the company.

“The idea for Fruitz came from my very first experience with dating apps, which was a disaster,” he said. “Simply put, the lovely person I met had a very different intention to mine. Expressing what you’re looking for is not easy because we’re fearful of being judged. As a result, no one was being honest with their intentions and everyone was wasting each other’s time.”

As such, the app “encourages open and honest communication of dating intentions” through the use of four different fruit metaphors: cherries, grapes, watermelons and peaches.

“Empowering people to be honest with their intentions was our first mission,” Kabab said. “To do this, we created the fruit metaphors to give people a playful way to communicate what they want, removing the fear of judgment for both men and women. At Fruitz we believe in healthy relationships – whether they are forever or just one night. Since our launch, it’s become clear to me that so many single people have had the same experience as me, and we can see that in our growth.”

Bumble founder and CEO Whitney Wolfe Herd also expressed her confidence in the combination, saying it will help accelerate Fruitz’s growth along with that of Bumble and Badoo.

“The acquisition of Fruitz allows us to expand our product offerings in line with our focus on empowering relationships for everyone,” she said.

Despite the increasing number of dating apps out there, analysts see further growth for the space ahead. Piper Sandler wrote in a January note that over the next several years, the global online dating market is projected to grow at a compound annual rate of 13% to reach nearly $10 billion in 2025.

Additionally, Goldman Sachs observed last month that while the acceptance of online dating has spread, penetration rates have remained low, indicating there is ample room for expansion.

Shares of Bumble were up 0.4% at $27.77 following the announcement. Since its initial public offering nearly a year ago, the stock has tumbled over 60%. 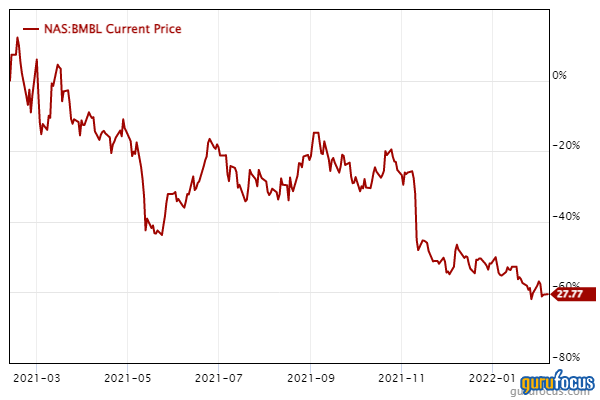 Of the gurus invested in Bumble,

Snap’s Results Are Suitable for Framing

Snap Inc. ( SNAP, Financial) saw its share price leap by nearly 60% on Friday on the heels of released…

Merck’s Selloff Is an Overreaction

The stock market has overreacted to the recent negative developments for Merck & Co. ( MRK, Financial), in my opinion.…