The software provider’s results looked even less appetizing when compared to those of its competitors. CrowdStrike Holdings Inc. ( 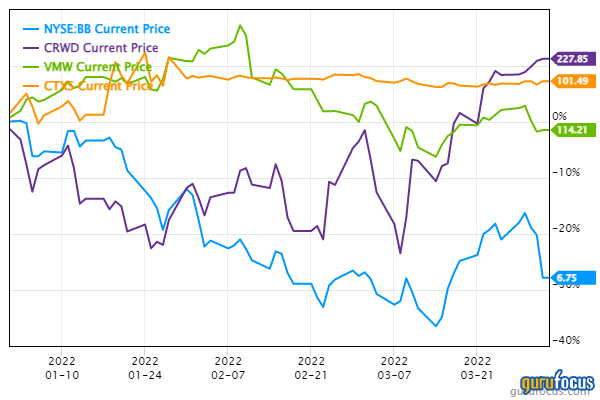 Forecasts are also raising concerns. Analysts at RBC Capital Markets suggested the company’s guidance calls for revenue of approximately $477 million, which would lag behind RBC’s $530 million forecast. Executives indicated they project cybersecurity revenue to be flat for all of 2023 and gains in licensing revenue to be small.

The company reported fourth-quarter and fiscal year 2022 results on Thursday, delivering another record quarter for design-related revenue for internet of things, both sequential and year-over-year billings growth for cybersecurity, as well as positive operating cash flow and net profit.

For the quarter, total revenue for the provider of security software and services to enterprises and governments around the world was $185 million, according to a release. IoT revenue reached $52 million, while cybersecurity’s revenue mark hit $122 million. Licensing and other revenue was $11 million. Net cash generated from operations was $10 million. The non-GAAP basic earnings per share were 1 cent, GAAP basic earnings per share of 25 cents and GAAP diluted loss per share of 3 cents.

“We’re pleased with the progress that BlackBerry made this quarter,” Executive Chairman and CEO John Chen said. “The IoT business recorded its first $50 million-plus revenue quarter since the start of the pandemic. In addition to overcoming a number of industry-wide challenges, such as supply chain constraints and the war in Ukraine, the QNX business set another record for quarterly design related revenue, demonstrating both strong fundamentals and momentum for the business.”

Management insisted it is excited about the prospects for the cybersecurity business given another quarter of billings growth and further strengthening of the team with industry expertise in both sales and product development. Chen said, “The key components are in place, and we expect continued billings momentum this year. Following the demonstration of our BlackBerry IVY edge-to-cloud data platform on auto-grade hardware at CES, we have secured a number of proof-of-concept trials.”

On Wall Street, questions remain. Morningstar analyst William Kerwin wrote that he was “pleased to see upside in results from the firm’s Internet of Things business, but disappointed with results and guidance out of BlackBerry’s cybersecurity unit.” He confessed to being “wary about the potential for cybersecurity success in the short term. Management has been reporting increasing headcount and previewing investment for growth for some time now, without the results to show for it — and guided for flat cyber sales in fiscal 2023.”

Opportunity in misery The shares of cybersecurity company Allot Ltd. ( Subscribe ALLT, Financial) are taking a beating. That creates…

GameStop’s Record Run: A Reminder of What Determines Stock Prices