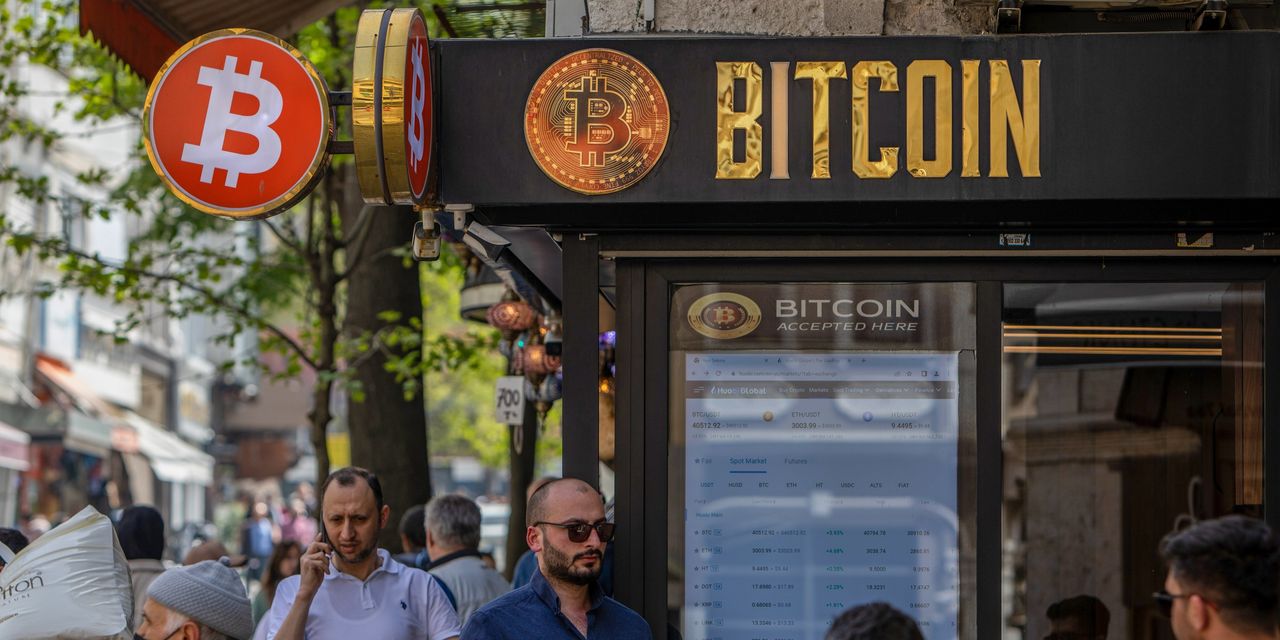 Bitcoin, the world’s largest cryptocurrency by market value, rose 4% from its 5 p.m. ET level Monday to trade at $32,332.07. The moderation followed the cryptocurrency dropping almost 22% over the previous five trading days—its worst such stretch since May 2021, according to Dow Jones Market Data. Ether gained 7% from its Monday evening level.

Cryptocurrencies have fallen in lockstep with the broader stock market in recent days. The trend for bitcoin and other digital assets to fall alongside stocks is one that has become more pronounced in recent years, investors say, as traditional money managers such as hedge funds and family offices have entered the space. Such funds may be more likely to sell crypto holdings during periods of volatility rather than hold them.

“That’s the double-edged sword. You have a larger market but on the other hand it’s treated like a regular financial asset,” said Ilan Solot, a partner at crypto hedge fund Tagus Capital LLP. “Stocks are collapsing and when you get stress, everything starts to get correlated.”

The recent break of the dollar peg in the third-largest stablecoin by market value has also injected volatility into the crypto ecosystem. The cryptocurrency TerraUSD, which is usually tied to a $1 value, moved below that over the weekend following a series of large withdrawals from Anchor Protocol, a sort of decentralized bank for crypto investors.

Sales of ether and bitcoin to defend TerraUSD’s value have also weighed on the prices of the two largest cryptocurrencies. TerraUSD’s decoupling from $1 looks unlikely to resolve soon, investors say, as many sell orders are still awaiting processing.

Binance, the world’s largest cryptocurrency exchange by volume, said Tuesday it had temporarily suspended withdrawals for TerraUSD and Luna tokens—another cryptocurrency used to maintain TerraUSD’s peg—due to a high volume of pending withdrawal transactions caused by network congestion. It later resumed those transactions.

TerraUSD’s value fell as low as $0.61 over the past 24 hours, according to CoinDesk, before rebounding to trade at $0.89 at 6 a.m. ET Tuesday. Luna, the sister cryptocurrency of TerraUSD, traded at $28.55 at the same time Tuesday, having lost half its value from 24 hours prior, according to CoinDesk.

Investors and analysts expect that some traders will step in to buy bitcoin and ether at reduced prices, even if they fall further in the coming days.

El Salvador’s president, Nayib Bukele, wrote Monday on Twitter that the country bought 500 bitcoins at an average price of $30,744 each. El Salvador, which became the first country to make bitcoin legal tender last year, has often added to its cryptocurrency holdings during selloffs.

Write to Elaine Yu at elaine.yu@wsj.com and Caitlin Ostroff at caitlin.ostroff@wsj.com