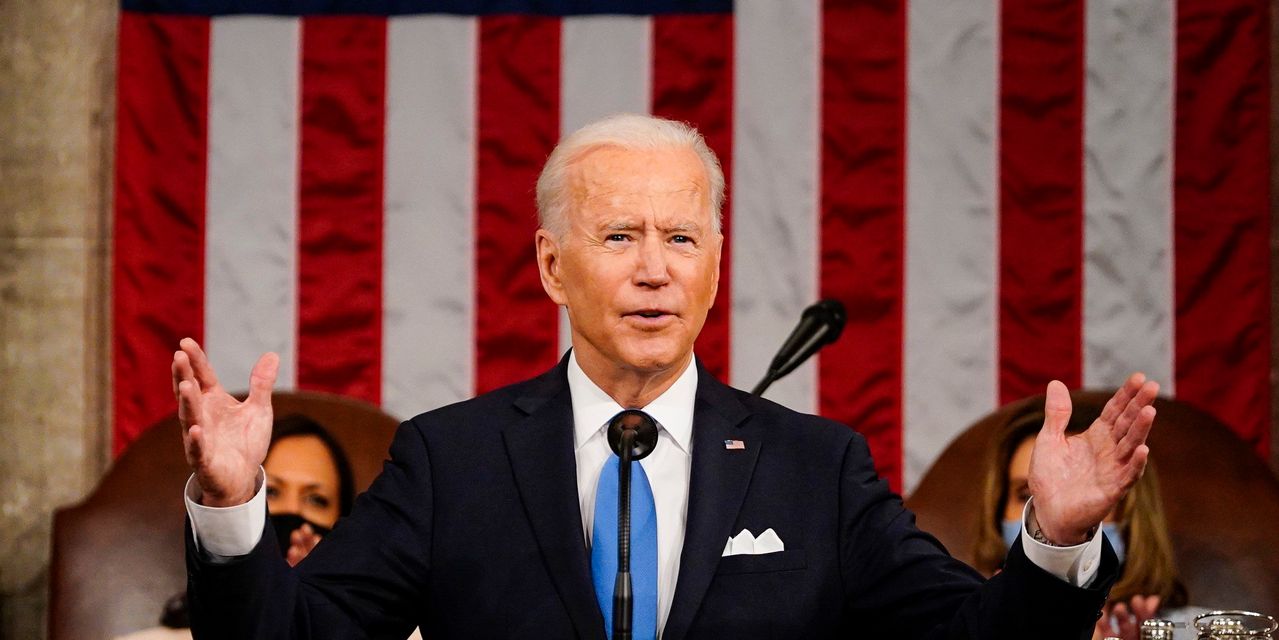 Franklin D. Roosevelt created the modern government-funded social safety net in the 1930s to aid lower and middle-income families—paid for in part by jacking up taxes on the richest Americans. Dwight Eisenhower built the interstate highway system in the 1950s. John F. Kennedy defined federal industrial policy in the 1960s by pledging to put a man on the moon by decade’s end.

In his first 100 days in office, Joe Biden has been attempting to emulate all three, seeking to combine and update for the 21st century his predecessors’ visions for a muscular Washington role in the economy.

With his $1.8 trillion American Families Plan unveiled Wednesday—following his $2.3 trillion American Jobs Plan and his $1.9 trillion American Rescue Plan—President Biden has proposed $6 trillion in new federal spending for the next decade. That is far more than any recent president at a comparable point in their terms.

Beyond expanding the size and scope of government, Mr. Biden’s program aims to redistribute trillions of dollars of resources from the highest-earning households and businesses to everyone making less than $400,000 a year.

All told, the top tax rates on the top earners would hit their highest rate, according to analysts, since before Ronald Reagan ushered in a new era favoring tax cuts in the early 1980s.

In Mr. Biden’s far-reaching agenda, some core themes have emerged. His administration wants to:

—Expand the reach of the government social safety net well beyond retirement security, healthcare and income support, pushing more deeply into attempting to offer a federal guarantee for child-care, preschool, and college.

—Extend the federal role in building infrastructure and redefine what it means beyond the traditional understanding of roads and bridges to high-speed internet service and caregiving, freeing up workers who would otherwise have to stay home to tend to children, or elderly parents.

—Give Washington a new role in developing critical industries from semiconductors to electric cars, to compete with foreign rivals such as China, and to attack climate emissions.

In unveiling last week Mr. Biden’s plans to slash carbon emissions to half of 2005 levels by 2030, his aides acknowledged that the technologies to do so might not yet exist, but that the government could bring those capabilities about through its unique power to force development.

And while the spotlight has so far been on Mr. Biden’s plans to expand government through increased spending, his aides have also been working to extend the power and remit of regulation to advance a long list of goals, from curbing emissions to giving workers more bargaining power.

The vision that Mr. Biden is explicitly rejecting is the one laid out by Mr. Reagan in the 1980s, and has in some form defined economic policy-making for the following four decades under presidents of both parties. Under that vision, lower taxes combined with deregulation was generally the best formula for faster growth and broadly shared prosperity. While presidents did expand Washington’s reach in some key areas during this period, the prevailing view was that reducing the government burden on businesses and investors would also benefit the working class.

Mr. Biden and his aides argue that more direct government support is a better way to support most Americans, and they see a clear trade-off between policies they say favor affluent winners over lower-income households. That is the theory behind their view that the tax code over the past few decades has tilted too much in favor of investors, and their desire to rewrite it.

“Trickle-down economics has never worked,” Mr. Biden said in his speech to Congress Wednesday night, invoking a phrase commonly used to describe the logic behind the tax cuts by Mr. Reagan and his successors. “We’re going to reward work, not just wealth,” was how Mr. Biden framed his tax plan.

Many Republicans argue that Mr. Biden’s attempts to support lower and middle-income households over investors will end up harming both. The pre-pandemic economy “was the best our country has seen in decades,” Iowa Republican Sen. Chuck Grassley said after Mr. Biden’s speech, a boom he attributed to the Trump tax cuts Mr. Biden wants to reverse. “The quickest way to slow our post-pandemic economic recovery is to hike taxes,” Mr. Grassley added.

A driving principle behind the Biden $6-trillion plan is that “we have to rebuild trust in government to solve big problems,” says Bharat Ramamurti, the deputy director of the White House National Economic Council. Or as Cecilia Rouse, head of the Council of Economic Advisers puts it: “government shouldn’t be a dirty word.”

The American public’s trust in government eroded over the past few decades in part as backlash to the big-spending programs of the 1960s, which critics said didn’t work as hoped, and blamed for the stagnation and high inflation of the 1970s.

The Biden economic program is rooted in a core belief that the American economy is now riddled with market failures that only Washington can fix—problems more evident now than during President Barack Obama’s term.

As Mr. Biden reviewed a history of major scientific breakthroughs of the 20th century, he said these were “investments that only government was in a position to make.”

The federal government has never played a major role in caregiving before, even as the sector has become more central to the economy, with more parents of young children working full time, and more working adults caring for aging parents. It is an area that progressive economists and labor activists have focused on in recent years, arguing that most households can’t find or afford care, a shortage driven in part because caregiving work doesn’t provide adequate compensation, and have succeeded in turning into a subject for public policy debate.

Both Mr. Biden’s jobs plan announced last month, and his families plan unveiled this week, propose hundreds of billions of dollars of new federal support for caregiving. That includes $400 billion in funding for home care for the elderly, and direct subsidies to lower and middle-income families—defined as those with incomes up to 150% of their state’s median income—to try to ensure they don’t pay more than 7% of their annual income on finding care for children up to the age of 5.

As administration officials sell those plans, they are attempting to portray them not as government handouts, but as a form of infrastructure that can boost productivity and growth. “It keeps mothers in the workforce, increasing labor-force participation,” a senior administration official said Tuesday previewing Mr. Biden’s latest plan.

Scientific warnings about the threat of climate change have also, in the telling of Biden officials, upended traditional assumptions about the government’s role in the economy.

“The need for public investment could not be clearer, perhaps in ways that weren’t clear 12 years ago when President Obama took office,” says Ben Harris, a Treasury Department economist. “Climate change is an example of a massive problem that requires government intervention to solve.”

One symbol of Mr. Biden’s vision—both for a more activist government and for extracting more tax revenues to pay for it—is his plan to bolster the IRS. During the 1990s, the Republican-led Congress ran a series of high-profile hearings exposing what lawmakers called heavy-handed and abusive enforcement by the agency. That prompted Democratic President Bill Clinton to sign on to an overhaul plan making it more difficult for the IRS to pursue taxpayers suspected of insufficient payments.

Now, Mr. Biden is arguing the pendulum swung too far, and affluent taxpayers are the ones now abusing the system. He wants to add $80 billion to the IRS budget after years of declining funding, doubling enforcement staffing, a plan the administration says could generate $700 billion in new revenue over the next decade.

Republicans warn that the higher taxes and spending risk undermining the fundamentals of the economy that was booming before the pandemic hit, and the nascent recovery now under way.

Mr. Biden’s plans call for “even more taxing, even more spending, to put Washington even more in the middle of your life, from the cradle to college,” said South Carolina Republican Sen. Tim Scott, delivering his party’s official response to Mr. Biden’s speech. “Our best future won’t come from Washington schemes or socialist dreams.”

Record flooding hammers the African Sahel, the latest in a series of shocks

KHARTOUM, SUDAN – SEPTEMBER 8: A view of the site damaged by flood during heavy rains in Al Lamab of…