There aren’t many companies in the world that are worth $1 trillion or more. In the U.S., only five make the list as of the time of writing: Apple Inc. ( 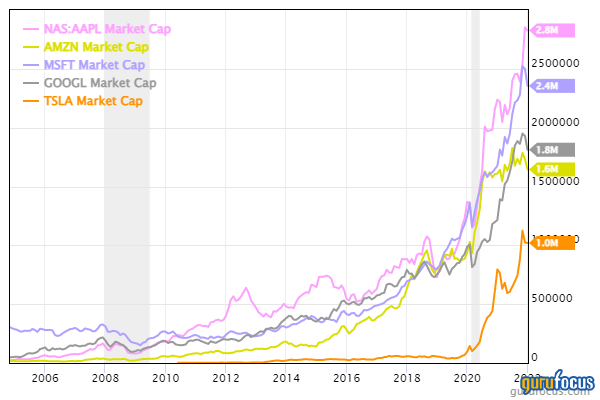 Investors are always on the lookout for stocks that have the potential to reach trillion-dollar valuations. While money can certainly be made elsewhere, we all hope to uncover the next Apple before everyone else does.

With the likes of Ford Motor Co. (

F, Financial) and General Motors (GM, Financial) gearing up to compete with Tesla, could the next trillion-dollar company come from the electric vehicles sector? How about Meta Platforms Inc. (FB, Financial), the company formerly known as Facebook, which briefly surpassed the $1 trillion mark last year before becoming embroiled in a series of public relations scandals?

According to GuruFocus data, Meta is indeed the closest to reaching $1 trillion again with a current market cap of $923 billion. However, after Meta, the U.S.-listed company that is the closest to $1 trillion isn’t some high-flying tech company – it’s

Value on the rise

As is typical with prolonged bull markets, value stocks have gotten a lot of flak the past couple of years as growth stocks outperformed.

Valuations have been so high since the beginning of the pandemic that the Oracle of Omaha hasn’t been able to find many ways to spend Berkshire’s $150 cash pile, much to the disdain of Wall Street. Some of that cash has gone to record share buybacks, as Buffett bought back nearly $25 billion worth of stock in 2020 and $20 billion in the first nine months of 2021.

Buffett has never been a momentum or growth investor, and as long as there are market cycles, things will inevitably take a turn back towards value and quality at some point. As “pandemic stocks” saw their valuations drop to more reasonable levels in the latter half of 2021, Berkshire managed to beat the S&P 500 for the year, gaining 28.9% compared to the index’s 26.9% (although the index’s modest dividends yield total returns up to 28.7%).

The market seems set to make a turn towards value in 2022. Inflation has been rising much faster than the U.S. Federal Reserve predicted, prompting plans to not only hike interest rates this year but also to begin reducing the assets on the Fed’s balance sheet.

As the economy strengthens, more investment dollars will likely flow to the production of real goods rather than the speculative demand for money that fuels the stock market’s growth cycles. This trend should be further boosted by the rising interest rates, as a rate-hike environment favors profitable companies that do not need to rely on increasing levels of debt in order to function.

In addition to an equity portfolio that primarily features quality stocks with proven records of growing profits and returning cash to shareholders, Berkshire also owns many operating business of various types that are tied to economic growth, such as Berkshire Hathaway Energy, the BNSF railroad and several retailers. Its insurance businesses should do fine as well, though there could be a period of struggle if inflation numbers keep running hot.

Shrugging off the conglomerate discount

All in all, a turn towards value favors Berkshire, and perhaps one of the biggest tailwinds for the stock could be the reduction of its conglomerate discount.

Conglomerate companies tend to become increasingly undervalued during long-lasting bull markets because investors do not feel like they understand them as well as they understand simpler companies. When everyone is looking for the next big thing and feeling intense pressure from the fear of missing out, they don’t want to spend the time researching a complicated behemoth like Berkshire.

Instead, they want a company with a compelling growth story, and the fact that a company has never been profitable sometimes adds to its appeal because investors feel like they are getting in before everyone else.

Many companies have been trying to get rid of the conglomerate discount this past couple of years by splitting up, spinning off a segment that has a good story or even selling an underperforming part of the business to someone that promises to make it profitable due to better synergies.

That hasn’t really been the case with Berkshire. While Buffett’s conglomerate has sold some of its subsidiaries in the past, it has never done so with the intention of increasing the price that investors are willing to pay for its stock. Berkshire is too big for that, and its dominance in the insurance industry relies largely on keeping its conglomerate intact for collateral so that it can ink the policies that no one else can.

As the market turns to favor value strategies again, Berkshire should be able to shrug off some of its conglomerate discount naturally, which could bring its valuation closer to the $1 trillion mark.

It’s only a matter of time before more companies join the trillion-dollar club. In terms of market cap, the closest names to this milestone currently are Meta and Berkshire. With the market making a turn towards value again, a $1 trillion Berkshire may not be too far off after all.

Berkshire would need to gain nearly 40% from its current price to join the trillion-dollar club. If its stock price can keep growing at the same rate as 2021, then that goal could just be a couple years away. Berkshire has seen its stock grow at a remarkably consistent rate over the years, gaining an average of 20% per year since 1965.

While Meta and top semiconductor stocks such as Nvidia Corp. (

NVDA, Financial), which is trading near a $683 billion market cap, could beat it to the punch, Berkshire might not be that far behind. 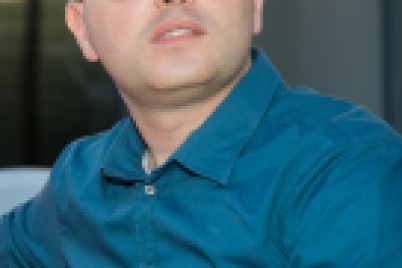