The event showed off Apple’s tried and true device update strategy. Across the board, new devices will feature better cameras, better battery life and better screens. Outside of its pro-level iPhones, which received new camera updates and access to several cinema quality features, the majority of “new” features that Apple announced for its products were derived from products that were announced last year during the iPhone 12 reveal. However, across the board the products boast extremely powerful processors that claim to easily outshine any other industry competitors.

While the tech giant usually focuses on new hardware during announcement events, it did place a particular emphasis on its new Fitness+ service. The widespread program offers workout classes in line with those seen from the likes of Peloton Interactive Inc. (

PTON, Financial). Apple’s Fitness+ takes the “accessible anywhere fitness class” craze to the next level with its Watch integration. Users can see their stats in real time overlaid on top of the class they are participating in and can even do group classes with their friends.

This new fitness service is slated to fall within the company’s Apple One subscription plan that bundles multiple services. The Fitness+ services are only accessible through the top-tier Premier plan, but still cost less than Peloton’s monthly fitness membership. The company could see an influx of subscribers as they are offering free trials of the program with all purchases of the new Series 7 Watch.

Despite the sensational event, Apple’s stock fell 1.22% to $147.72 per share with a market cap of $2.44 trillion on Sept. 14. According to the GF Value Line, the stock is still trading at a significantly overvalued rating. 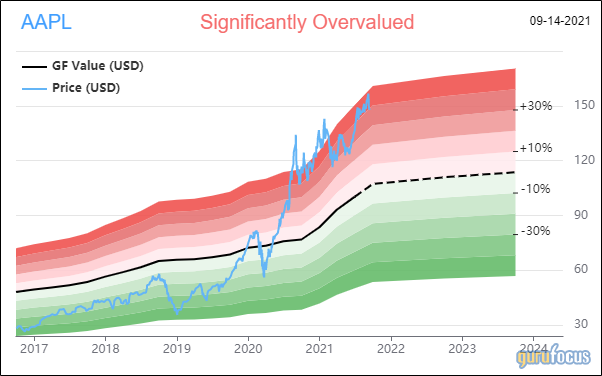 Unfortunately for Apple, the failure of the event to captivate audiences came hot on the heels of multiple struggles. The beginning of September saw the company lose its ability to capture huge App Store profits. The finalization of its lawsuit with Epic Games mandated that the company allow developers to offer payment solutions outside of Apple’s ecosystem. This will likely lead to a significant decrease in revenue as Apple will lose a guarunteed 30% cut from in-app payments.

Further compounding the September struggles was the release of an emergency security update from the company just 24 hours prior to its announcement event. The update provided protections against a zero-day, zero-click exploit that could access iPhones through iMessage. Not one to be rattled by exploits, Apple’s broadcast emphasized new security features to protect users throughout its presentation.

Despite the recent headline struggles, Apple (

AAPL, Financial) has continued its seemingly never-ending rise throughout the second half of 2021.
Warren Buffett (Trades, Portfolio) maintains the top guru position in the company with 5.37% of shares outstanding and is sitting on a 13.19% year-to-date gain on his holding.

Other top guru shareholders of Apple include

Take Advantage of the Silver Bull Market With MAG Silver

The minutes from the U.S. Federal Reserve’s meeting in July indicate that the central bank could begin to taper the…