Our modern, connected world is dependent upon these assets, so consistent cash flows can be expected. As a rule of thumb, REITs have to pay 90% of their rental income to investors. This makes them exceptional cash flow assets and inflation hedges. Additionally, the average mobile data usage per smartphone is 11.4 gigabytes globally; this is expected to increase by just under 5 times to 53 GB per user by 2027.

The rollout of 5G is set to act as a further tailwind for telecommunications infrastructure. The 5G infrastructure market is expected to reach $53.8 billion by 2026, expanding at a rapid 53% compound annual growth rate. According to Ericsson, 5G networks will carry 62% of the world’s smartphone traffic by 2027. Let’s dive into the company, its financials and recent guru trades to determine if it offers good value. 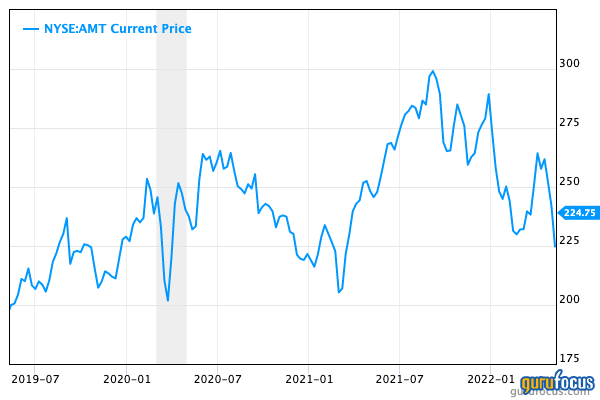 As a global telecom REIT, American Tower has approximately 200,000 telecom sites around the world and was even ranked 410 on the Fortune 500 due to its size. The company builds and operates these cell phone towers and then leases the infrastructure to larger carriers such as Verizon ( 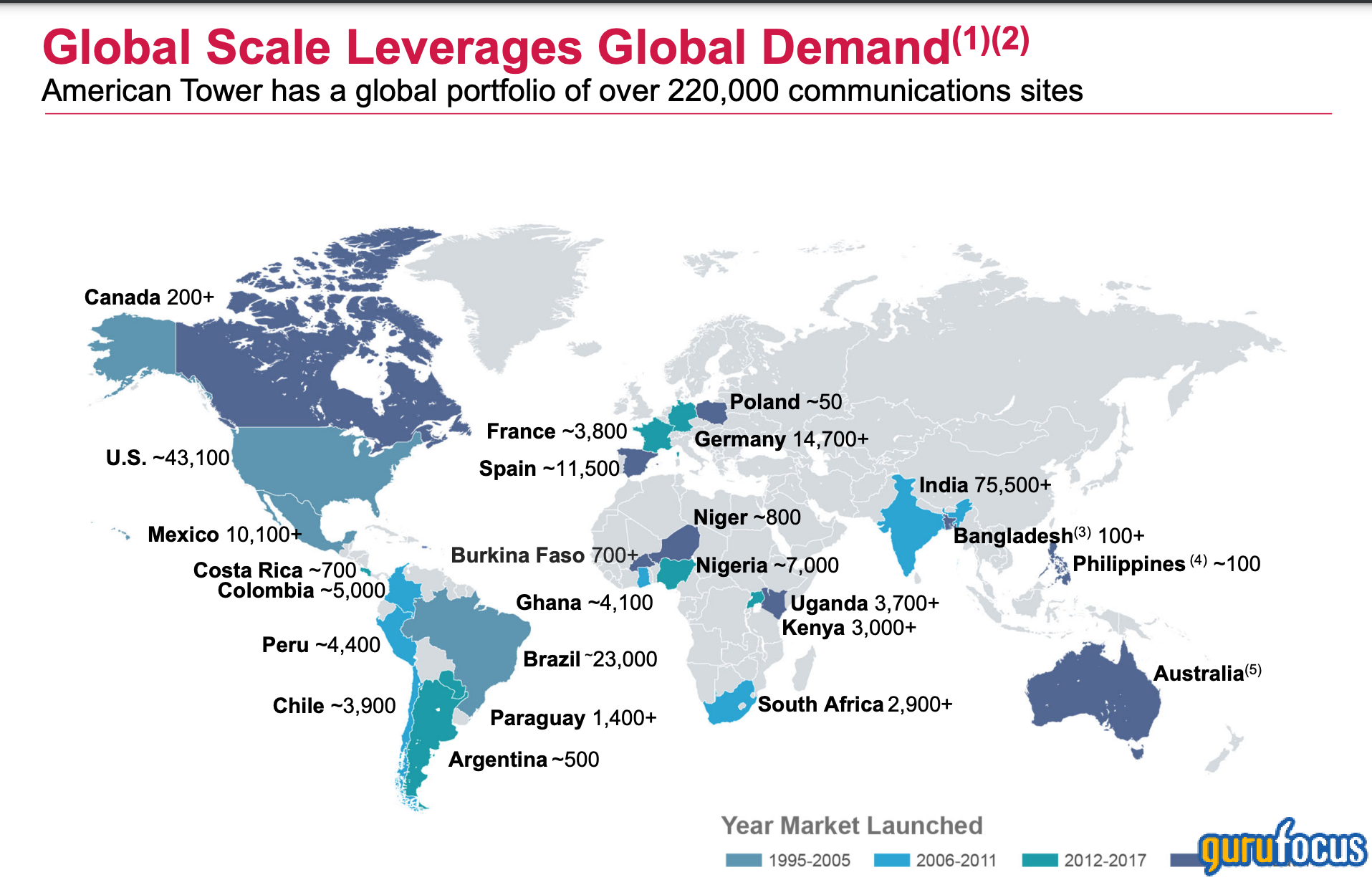 The company leases telecom towers for radio and even television broadcasting, but I wouldn’t consider this the major growth part of the business. It also makes a small amount of services revenue (3%) by helping other companies with telecoms expertise in tower construction, zoning, etc.

American Tower is expanding into the rapid data center market, having acquired CoreSite for $10.1 billion in November. It operates around 25 data centers across the U.S.

The company is also leveraging the ground area around its towers to build edge data centers, which is an exceptional strategy given the growth in cloud infrastructure. Incorporating additional tenants into a single site represents a significant opportunity to increase operating leverage as the company does not have to purchase more land. 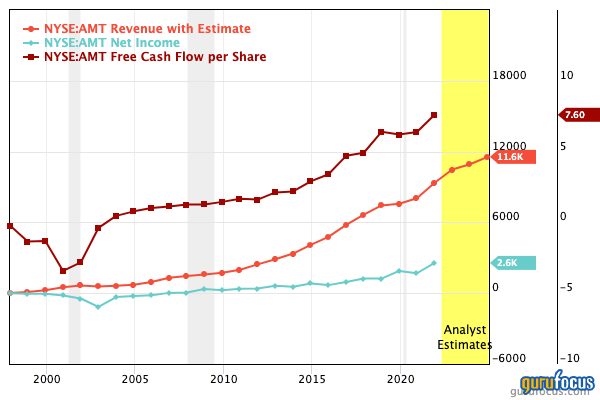 Operating income came in at $3.2 billion, up just 3% year over year. American Tower’s free cash flow jumped from $2.8 billion to $3.4 billion, which represents an increase 21%. The company operates at a high gross margin of 71% and a solid operating margin of 35%, which appears to be stable. 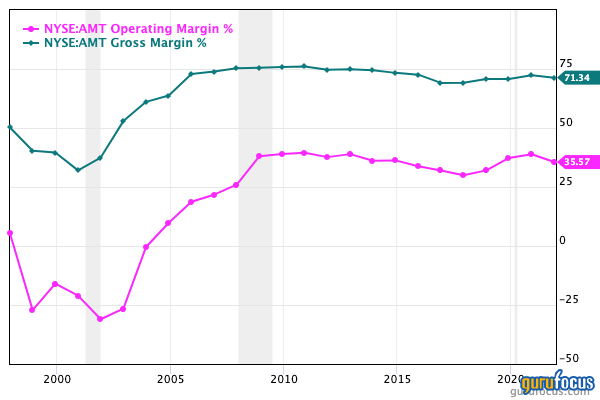 For fiscal 2022, the REIT expects cash flow of $4.7 billion, which represents a further increase. The balance sheet has $1.9 billion in cash and $4.5 billion in current debt. This could be an issue given interest rates are rising, but does give American Tower fuel to expand.

In terms of valuation, the GF Value Line indicates the stock is modestly undervalued relative to historic valuation multiples, past financial performance and future earnings projections. 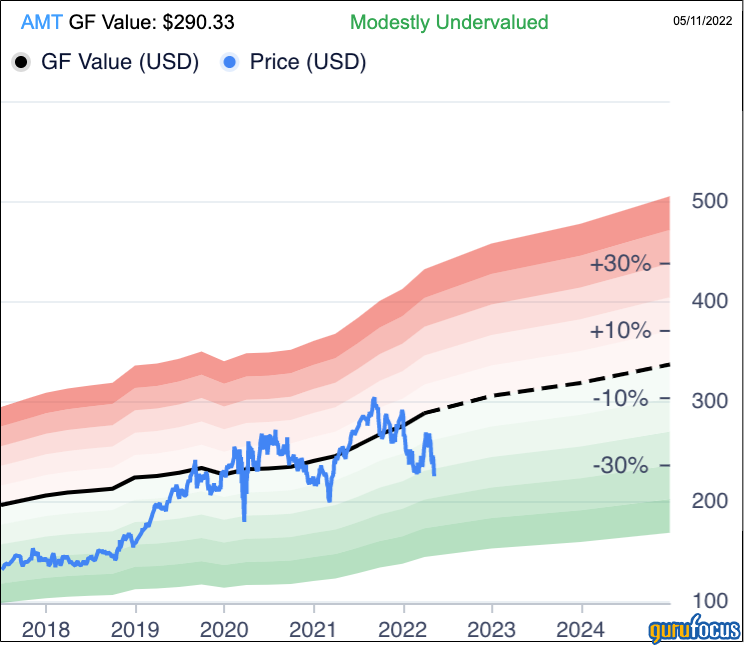 American Tower is a tremendous company that is often considered to be a hedge fund favorite thanks to its consistent cash flows and obvious growth trends in the 5G industry.

I think the company’s data center strategy is extremely smart and the right method moving forward. Some risks are the company’s high debt and potential customer consolidation. But despite this, American Tower appears to offer long-term value.

Broadcom Inc. ( AVGO, Financial) is an American company that designs, develops, manufactures and distributes a wide range of semiconductor…