A heavy post-market sell-off indicates many investors seem to be worried about Amazon.com Inc.’s (

AMZN, Financial) first-quarter earnings miss. However, it needs to be considered that the stock market is a forward-looking environment, so unless systemic headwinds persist, I believe the stock will likely recover.

Amazon missed out on its earnings target by $16.05 per share. Additionally, the e-commerce gian’ts revenue fell $67.09 million short of estimates.

Furthermore, the company free cash flow was down 171% year-over-year and 297% if depreciation isn’t considered. Amazon’s net income dropped by 20% year over year, and its Amazon Web Services division is keeping it afloat by spanning 80% of the company’s net income margin, which leaves much to ponder about. 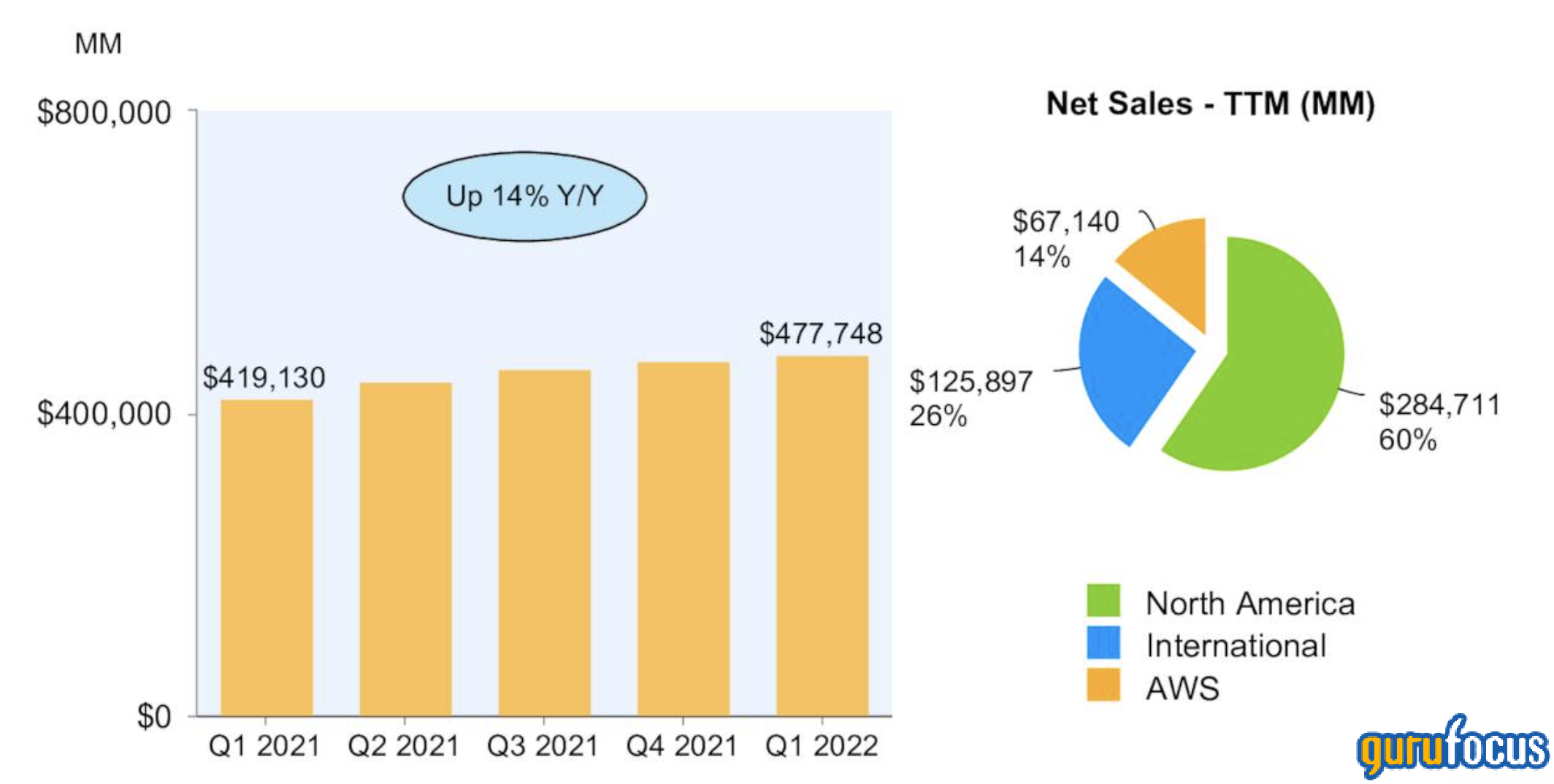 Another aspect to consider is the company’s Rivian Automotive Inc. (

RIVN, Financial) investment. Amazon took a $7.6 billion loss on its Rivian investment after the stock tumbled by more than 50%. The stake in Rivian equates to roughly 22%, classifying it as an investment in associates, which means that any gains or losses will have a proportionate effect on the company’s income statement.

Amazon’s main concern has been inflation. The company is experiencing significant margin pressure, yet its adjusted net sales have increased by 7% year over year, which is still respectable. Furthermore, it is still seeing solid month-over-month growth in North America, suggesting the growth trajectory is far from over.

A matter worth considering is that Amazon has been spending heavily on enhancing its labor force productivity with added technology. This is conveyed by the company’s 52.10% yearly increase in capital expenditures and its 25.18% year-over-year increase in depreciation and amortization. Much of Amazon’s margin pressure may be transitory for this reason.

Another argument for margin pressure being transitory is the economic outlook. The potential for rising interest rates is there, and inflation could taper off moving forward with little effect on Amazon’s consumption as it holds a powerful market position that allows it to fend off consumer cyclicality.

Finally, the company’s Rivian investment could recover. The electrice vehicle manufacturer has much promise, and it’s a long-duration investment for Amazon. I see tremendous potential in this investment once the market is more welcoming to growth stocks.

There are a few quantitative risks regarding Amazon. First off, the stock has a monthly 5% value at risk ratio of 19.46%, meaning that it’s likely to lose 19.46% on a monthly basis, 5% of the time. Additionally, the Sharpe ratio of 0.93 isn’t terrible, but it’s short of the 1 benchmark, which is the desired standard for an investment with a lucrative risk-return profile.

From a valuation vantage point, Amazon is in good shape. I compared its price multiples to the normalized averages to account for the business cycle and found that its forward price-earnings ratio is trading at a 44.32% discount to history. The stock is also trading below its normalized price-sales and price-book ratios, suggesting it is undervalued on both an intrinsic and accrual basis.

Overall, Amazon’s earnings miss isn’t something to worry much about, in my opinion. Systemic headwinds and aggressive reinvestment rates are likely what’s caused the miss, and these matters will probably correct themselves in the long run. The stock does possess a few risks but appears undervalued at this stage.

Verizon Communications Inc. ( VZ, Financial) experienced some disconnects in the first quarter of 2022, resulting in year-over-year declines in…