AMD, Financial) has witnessed a remarkable growth trajectory over the past year after exceptional growth in a business environment marred by a semiconductor shortage.

The company was able to capture a sizeable chunk of the PC market from Intel Corp. (

INTC, Financial) and has a definite technological edge through its 7-nanometer chip offering. The boom in the gaming industry and increased console sales have also benefited the company. Moreover, the recent acquisition of Xilinx Inc. (XLNX, Financial) is expected to open a new chapter for AMD in programmable devices and associated technologies. Overall, I believe the company has a lot going on and deserves a more in-depth analysis of its recent growth story.

AMD’s performance over the past 12 months has been truly spectacular as the company has delivered a string of all-around beats. In the first quarter, the company reported a top line of $3.45 billion, which grew a staggering 92.89% compared to the $1.79 billion in revenue reported in the prior-year quarter. The company was comfortably ahead of the analyst consensus estimate of $3.18 billion.

Revenue translated into a gross margin of 46.07% and an operating margin of 18.98%, which were up from the prior-year quarter. AMD reported net income of $547 million and adjusted earnings per share of 52 cents, which was 8 cents above analysts’ average estimates. The company has given its rival, Intel, a run for its money over the past year.

AMD’S business continued to accelerate owing to robust market demand and a strong portfolio of products. In computing and graphics, the company generated $2.1 billion in revenue, a 46% annualized growth given the Ryzen processor strength and the Radeon GPU growth. In addition, client PC processor ASP (Active Server Pages) performed well as a result of a healthy mix of both desktop and notebook processor sales. Data center revenue more than doubled, which is attributable to the growing cloud adoption.

The real star performer, however, was the Enterprise, Embedded and Semi-custom segment, which nearly quadrupled its revenue given the increased push of the latest Sony PlayStation and Microsoft Xbox consoles (for which AMD supplies the CPUs and GPUs). Another major driver of this segment’s phenomenal growth was the continuing EPYC server CPU traction, including the recent launch of AMD’s third-generation EPYC processors dubbed Milan.

It is also worth mentioning that the company secured multiple high-volume wins across many Fortune 500 aerospace, automotive, electronics and engineering companies throughout the quarter. Increasing consumer demand, strong supply chain management and continued innovation are all key factors behind these impressive results.

In 2020, AMD entered into an agreement to acquire adaptive computing powerhouse Xilinx for $35 billion in an all-stock transaction. The deal was recently approved by shareholders.

Xilinx is a global leader in designing field-programmable gate array (FPGA), a technology that has played a pivotal role in a number of system designs over the years. Unlike microprocessors that come out of factories, the chip structure of FPGAs can be changed even after the unit is packaged, which leads to intrinsic time-to-market advantages and flexibility.

The company serves many areas, ranging from the cloud to the edge to critical 5G infrastructure, machine learning and autonomous vehicles solutions. The addition of Xilinx will be a major data center and high-performance computing play for the company. Notably, Xilinx produces FPGAs in a cost-effective way even when chips are produced at a small scale and have reintroduced many technological aspects to improve the performance of its chips considerably. As per management, the acquisition will increase AMD’s total addressable market opportunity from $79 billion to $110 billion. Additionally, the company is also expected to realize cost synergies from this business combination, thereby driving the bottom line. 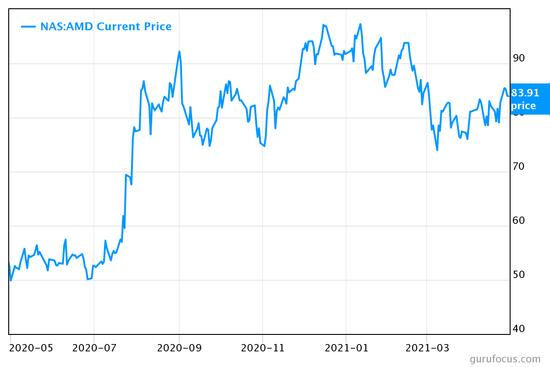 AMD’s share price has increased by more than 50% over the past 12 months as a result of the combined strength across broad-based PCs, servers and gaming consoles.

The stock is trading at a price-earnings multiple of 35.7 and an enterprise value-to-revenue ratio of 8.71, which are both on the higher side but well below the company’s historical highs.

It is worth highlighting that management has given a highly positive 2021 outlook with expected growth of almost 50% for the year. AMD’s stock appears significantly overvalued as per the GF Value indicator, but I believe there is definite scope for further growth if management is able to deliver on its guidance.

The stock could resume its upward momentum if the company continues its story of strong results, which is why it is definitely a compelling pick for growth investors.

US Market Remains Significantly Overvalued Ahead of Election Day

US Indexes End Lower Friday With Gains for the Week