As the first half of 2021 comes to a close, investors are optimistically looking forward to the remainder of the year as the economy begins to reopen.

While the energy sector was one of the hardest-hit throughout the course of the Covid-19 pandemic due to decreased travel, the U.S. Energy Information Administration reported earlier this month that rising demand has boosted its forecasts for gasoline consumption to an average of 9.1 million barrels per day for the summer months and the average retail price of gas will be $2.92.

Due to these developments, value opportunities may be found among oil and gas companies that outperformed the Standard & Poor’s 500 Index over the past six months. As of June 28, the GuruFocus All-in-One Screener, a Premium feature, found several stocks that with a market cap over $5 billion that had a higher return relative to the index for the period. It also looked for stocks that are fairly valued according to the GF Value Line, which bases its analysis on historical ratios, past performance and future earnings projections.

According to the GuruFocus Industry Overview page, the industry is composed of the oil and gas and other energy sources sectors: 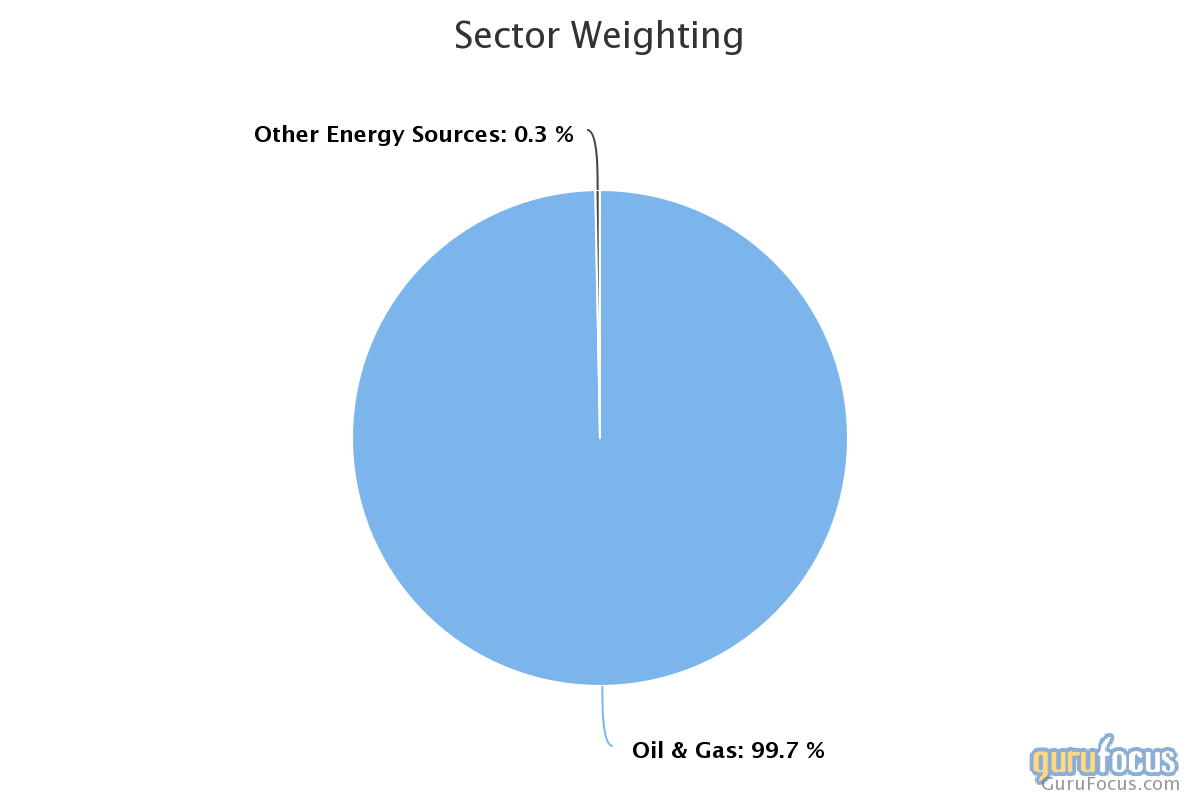 Based on these criteria, energy stocks that outperformed the S&P 500 by at least 15% over the last six months are Kinder Morgan (

In addition to the GF Value Line showing it is fairly valued, the valuation rank of 7 out of 10 suggests the stock is undervalued despite the fact its share price and price-sales ratio were near multiyear highs. 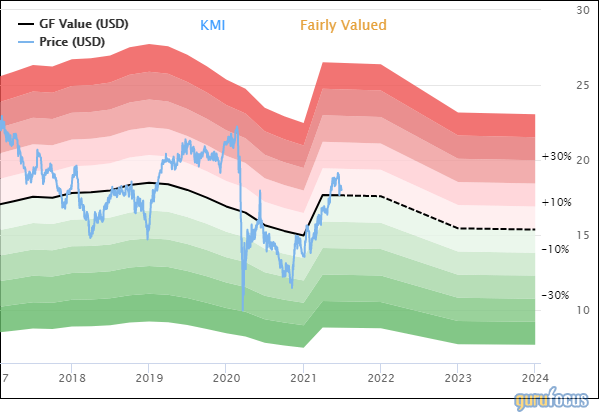 The Houston-based energy infrastructure company, which owns and controls oil and gas pipelines and terminals, has a GuruFocus financial strength rating of 3 out of 10 on the back of poor interest coverage. The low Altman Z-Score of 0.84 warns the company could be in danger of bankruptcy if it does not improve its liquidity. The return on invested capital is also being eclipsed by the weighted average cost of capital, indicating struggles with creating value.

The company’s profitability fared better, scoring a 6 out of 10 rating as a result of strong margins and returns on equity, assets and capital that outperform over half of its competitors. Kinder Morgan also has a high Piotroski F-Score of 7, indicating operations are healthy. Despite recording a decline in revenue per share over the past several years, it also has a predictability rank of one out of five stars. According to GuruFocus, companies with this rank return an average of 1.1% annually over a 10-year period.

Of the gurus invested in Kinder Morgan,

While the GF Value Line shows the stock is fairly valued, the valuation rank of 8 out of 10 leans more toward undervaluation even though the share price and price ratios are approaching multiyear highs. 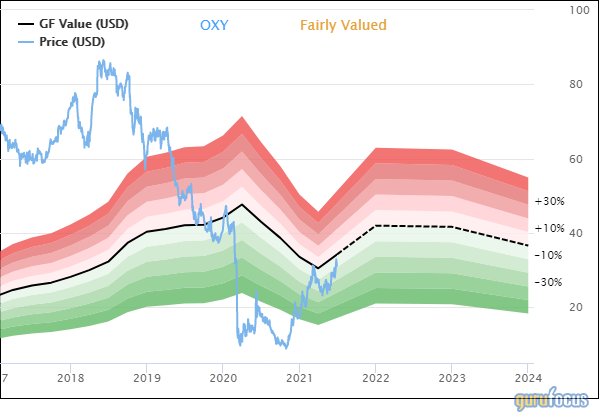 The oil and gas producer, which is headquartered in Houston, has a GuruFocus financial strength rating of 3 out of 10. The weak Altman Z-Score of 0.08 warns the company could be in danger of going bankrupt. In addition, assets are building up at a faster rate than revenue is growing, indicating it may be becoming less efficient.

The company’s profitability scored a 5 out of 10 rating on the back of negative margins and returns that underperform a majority of industry peers. Occidental also has a low Piotroski F-Score of 3, suggesting operations are in poor shape, and the one-star predictability rank is on watch as a result of revenue per share declining over the past 12 months.

With a 12.42% stake, Dodge & Cox is Occidental’s largest guru shareholder.

Posting a gain of over 90% for the year so far, Diamondback Energy (

Based on the GF Value Line, the stock appears to be fairly valued. 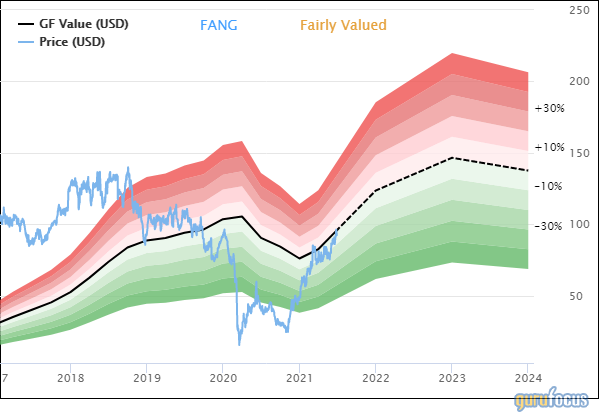 The Midland, Texas-based oil company has a GuruFocus financial strength rating of 4 out of 10. As a result of issuing approximately $3.2 billion in new long-term debt over the past three years, the company has weak interest coverage. In addition to a Sloan ratio indicating it has poor earnings quality, the Altman Z-Score of 0.11 warns the company could be in danger of going bankrupt as assets are building up at a faster rate than revenue is growing. The WACC also surpasses the ROIC, indicating struggles with creating value.

The company’s profitability scored a 6 out of 10 rating, driven by a robust operating margin. Its returns, however, are negative and underperform a majority of competitors. Diamondback also has a low Piotroski F-Score of 2 and the one-star predictability rank is on watch as a result of recording losses in operating income and declines in revenue per share over the past several years.

Increasing over 25% year to date, HollyFrontier (

While the GF Value Line shows the stock is fairly valued, the valuation rank of 6 out of 10 is more indicative of undervaluation. 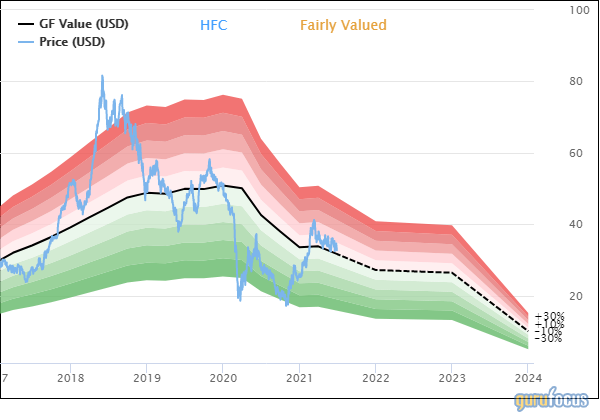 The oil and gas refiner, which is headquartered in Dallas, has a GuruFocus financial strength rating of 5 out of 10. As a result of issuing approximately $754.2 million in new long-term debt over the past three years, it has poor interest coverage. The Altman Z-Score of 2.17 indicates the company is under some pressure. The ROIC has also fallen below the WACC, hinting at poor value creation.

The company’s profitability scored a 6 out of 10 rating. Despite having negative margins and returns, they outperform over half of industry peers. HollyFrontier also has a moderate Piotroski F-Score of 4, indicating operations are stable, but the one-star predictability rank is on watch as a result of losses in operating income and declining revenue per share.

A Trio of High Return Businesses on Robust Balance Sheets