The emerging power of the immersive internet is reshaping the world. Often referred to as the future of the internet, the metaverse is piquing the interests of every industry, with a growing number of tech companies investing billions of dollars in aggregate to capitalize on the new world of technology. According to Holonext, in October 2021 alone there were an estimated 2.62 million searches for the term “metaverse” and its related topics, which highlights the strong enthusiasm for the metaverse both among businesses and consumers. Although there is no clear definition, many experts refer to the metaverse as a 3-D world that is immersive and accessible in real-time by an infinite number of people, thereby allowing for social interactions, work and business transactions. At the metaverse’s foundation, it’s the same internet but a multi-directional one that enables users to interact and participate in it.

Mentions of “metaverse” in global company transcripts versus other themes 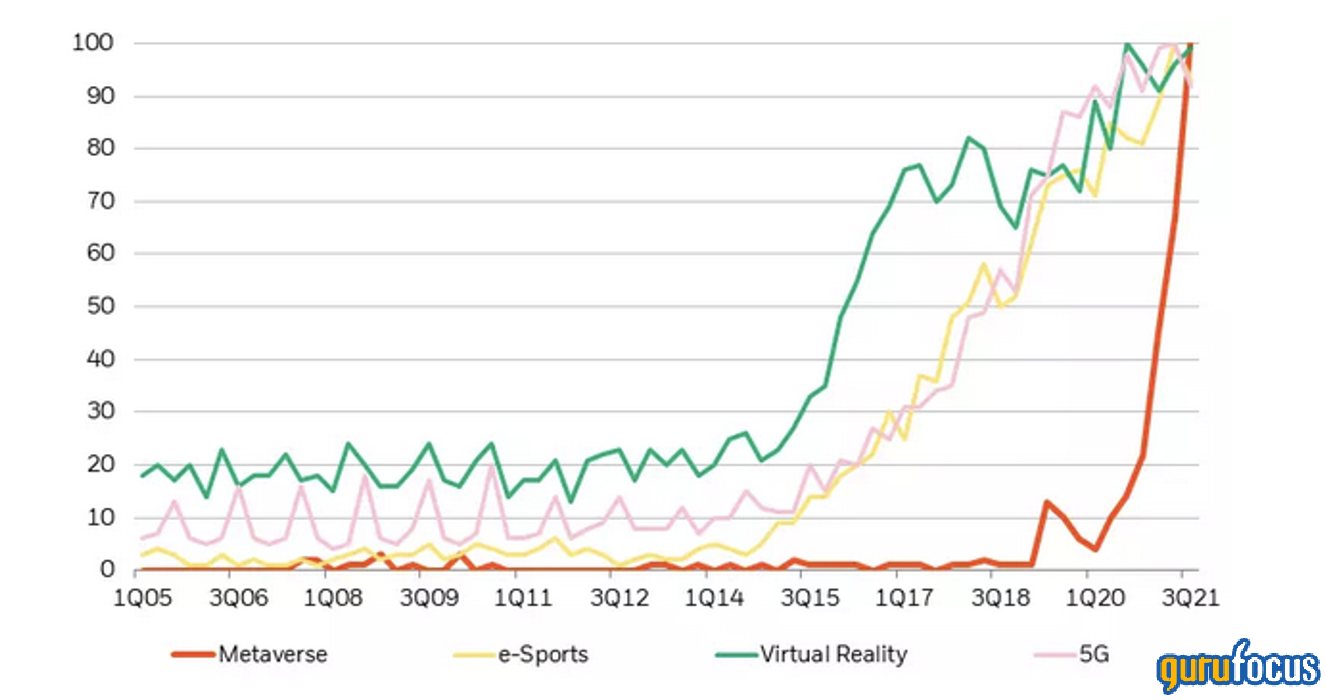 Because of concerns about higher interest rates, technology stocks have struggled since the beginning of 2022 relative to their previous performance, but the long-term value the metaverse offers is capturing peoples’ attention. Investing in the metaverse is a long-run bet, which makes the recent pullback of stock prices a good opportunity for long-term investors to invest in companies that are pursuing a future in the metaverse. The metaverse is also still in its infancy, similar to the early days of the internet in the 1990s. Just like the internet has become an everyday part of our lives, experts predict that decentralized, multidimensional digital worlds will also become an indispensable part of people’s lives in the not-so-distant future. Additionally, as the demand for virtual reality tools grows, so will the metaverse because those technologies lie at its heart. 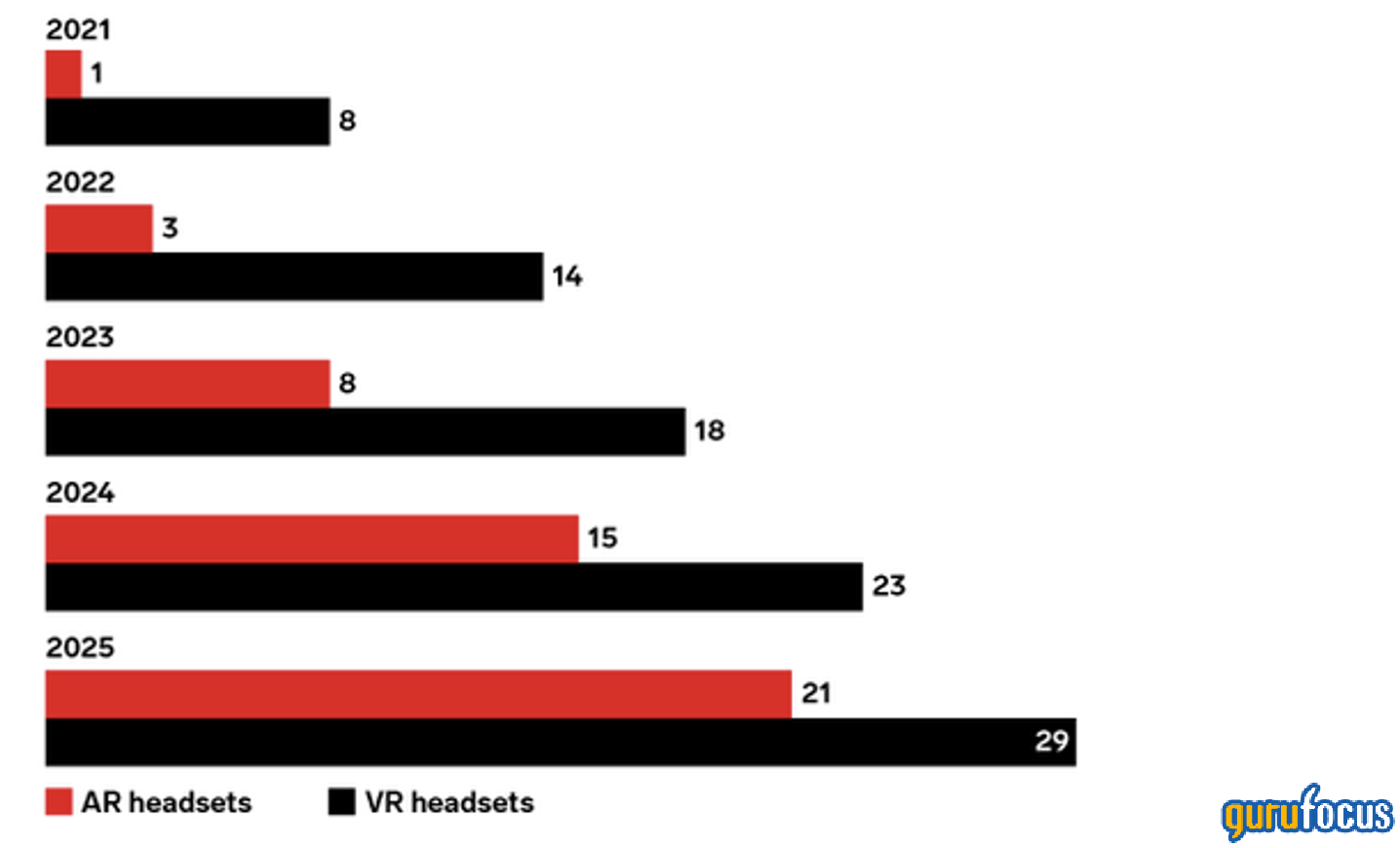 It is unclear which metaverse platform will dominate, or if multiple metaverses will coexist to serve different markets. Until then, there is room for many companies to succeed in the battle for metaverse supremacy as there is still a long runway for growth. Gaming, social networking platforms, fashion, architecture, movies and automobiles are some examples of industries that stand to benefit from immersive experience platforms. Companies that create design tools stand to benefit as well because developers will use those tools to create 3-D worlds that will aid in the development of the metaverse’s infrastructure. According to Grand View Research, the industry will increase at a 39.4% compound annual growth rate through 2030, reaching a market size of $678 billion.

FB, Financial) and its focus on the metaverse make it a top-tier investment choice today for investors wanting to gain exposure to this technology. As demand for the virtual world and simulation software technology grows, the company will undoubtedly benefit from the metaverse market. Many other tech companies are leading the charge by bringing the metaverse to life, but many investors are not focused on the hidden gems since they do not receive the same attention as Meta. Below are some of these hidden companies to look out for:

CAJ, Financial) is a Japanese multinational corporation that develops, manufactures and sells optical, image and industrial products such as lenses, cameras, medical equipment, scanners, printers and semiconductor manufacturing equipment. With the thriving creators’ industry, VR videos are likely to become the preferred form of content in the future. Canon has already entered the metaverse market with the 2021 release of the Canon RF 5.2mm F2.8L Dual Fisheye lens. The new VR lenses provide users with the tools to capture 3-D assets.

With virtual meetings becoming more common and necessary, Canon has announced the development of Kokomo, a virtual reality communication platform. This will allow users to meet friends and family “virtually in-person” by using a compatible Canon camera, a VR headset and a compatible smartphone. Kokomo is currently in development and is expected to be released this year. The software employs Canon cameras and imaging technology to generate realistic representations of its users, giving the impression they are speaking face to face and not through avatars. Canon refers to this as a real “Together” Experience.

RBLX, Financial) is an American online gaming platform developer with nearly 55 million daily active users. With its free-to-play online games, the company has long been a pioneer in immersive online experiences. The gaming platform has amassed a massive userbase and in-game online communities, putting the company in a strong position to profit in the future. In January, the number of daily active users increased by 32% year over year to 54.7 million, while the number of hours spent on its platform increased 26% to 4.2 billion.

Roblox is already a popular virtual world, and the company stands to benefit from the expansion of its metaverse platform because it already has a developer platform and a significant userbase. The company also plans to bring educational videogames into classrooms and sees itself as a future platform for concerts. Virtual concerts have previously been hosted by musicians such as Tai Verdes and Lil Nas X on Roblox’s platform, indicating that virtual events are gaining broad appeal. The growing popularity of these new use cases should help Roblox maintain its double-digit growth rates in the foreseeable future.

MTCH, Financial) is a leading online dating company that owns over 45 global online dating platforms such as Match, Tinder, Meetic, OkCupid and OurTime. The next phase of online dating is already underway as the internet transitions from the social networking phase to the immersive web. Match Group plans to capitalize on the world of digital avatars, which will help the company fulfill its mission of helping people in making meaningful connections.

According to the company’s latest survey, 75% of users are open to dating using video applications, compared to only 6% before the pandemic. This reflects the growing popularity of online dating. In June 2021, the company acquired Hyperconnect, a South Korean video, artificial intelligence and augmented reality technology company, to establish a presence in the next generation of the internet. Using Hyperconnect’s technology, the company launched live streaming, an interactive discovery experience and online video cafes for its numerous apps. Hyperconnect’s app, Hakuna Live, already provides group live video and audio services, as well as avatar-based streaming, in South Korea, Japan and other Asian markets.

The metaverse is quickly gaining popularity and investors are not oblivious to this interesting development. Investing in the companies that are leading the charge in bringing the metaverse to life could help investors book above-average returns over the next several years.

Pinterest ( PINS, Financial) is the 14th largest social media network in the world and has a platform designed to…

When looking for bargain opportunities, value investors may want to consider the following securities, since their share prices are trading…